Two-thirds of people now own a smartphone, up from 39 per cent in 2012, and they use it for nearly two hours every day to access the internet. One third (33 per cent) of internet users see their smartphone as the most important device for going online, compared with 30 per cent who are sticking with their laptop. 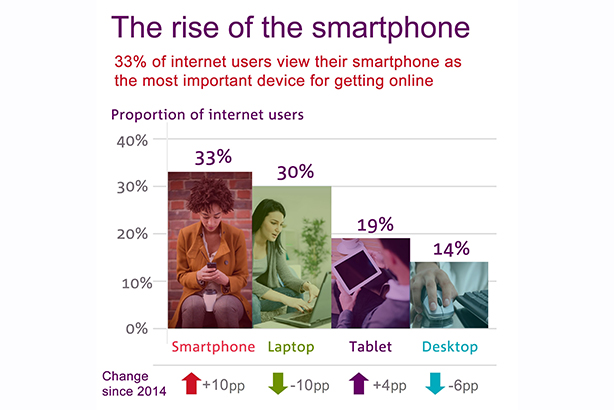 Ofcom said the rise in smartphone ‘surfing’ marked a clear shift since 2014, when just 22 per cent turned to their phone first, and 40 per cent preferred their laptop.

Ofcom said the surge is being driven by the increasing take-up of 4G mobile broadband. During 2014, 4G subscriptions have leapt from 2.7 million to 23.6 million by the end of 2014.

People now spend almost twice as long online through smartphones than laptops and personal computers, the research found. On average, mobile users spent one hour and 54 minutes online each day using a smartphone in March 2015, compared with just one hour and nine minutes on a laptop or PC.

However, Ofcom pointed out that this is still only half of the three hours and 40 minutes people spend in front of the TV each day.

The research found that smartphone users with 4G are using their devices more than those without. For example, they are watching more TV and video clips online (57 per cent versus 40 per cent) and making more face-to-face and voice calls over the internet (28 per cent versus 20 per cent). 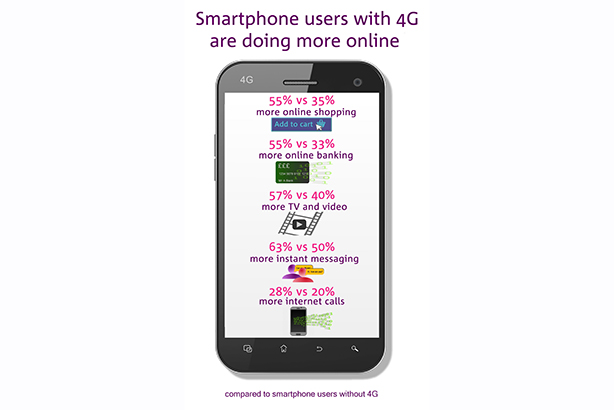 Smartphones now take more photos than any other device, including digital cameras, with 60 per cent of adults saying they use them most to take a snap, rising to 89 per cent of 16- to 24-year-olds. Just over one in five adults (22 per cent) mostly use their digital camera.

People in the UK also took an estimated 1.2 billion ‘selfies’ in the past year.

People’s growing reliance on smartphones and tablets appears to be affecting TV viewing, Ofcom said, with most 16- to 24-year-olds watching on-demand and catch-up programmes on computers and smartphones rather than on a TV connected to a set-top box.

But, despite the growth in online viewing, TV still reaches the overwhelming majority of people; 92 per cent watch TV each week, against 93 per cent in 2013.

However, people are spending less time in front of the TV. On average we spent three hours and 40 minutes a day watching on a TV set in 2014;,11 minutes fewer than in 2013 and the second consecutive year of decline.