Viewed as a global icon by millions due to his popularity in the 1980s and 90s, the revelations about Hogan were greeted with dismay and so far the repercussions have been severe.

Pre-empting a major backlash, the WWE took proactive steps to distance itself from the controversy. All mention of Hulk Hogan was scrubbed from WWE.com, he was removed as a judge on the wrestling-based reality show Tough Enough despite it being mid-season, and all other contractual obligations with the organisation were terminated. This all happened before the news broke, and the WWE had a succinct statement prepared to address the issue when it was revealed.

So the question begs: can the wrestling icon recover his reputation? From a PR perspective, the Hogan camp initially appeared to handle things well. A swift apology was issued to People.com, which was circulated globally as news organisations reported the story.

Things started to go downhill when Hogan took to Twitter. Having already made numerous Twitter-related gaffes in the past, Hogan inadvertently made social media PR blunders relating to this incident.

Firstly, he retweeted a now deleted comment, which compared his use of language with President Obama's, despite the n-word being used in a different context. 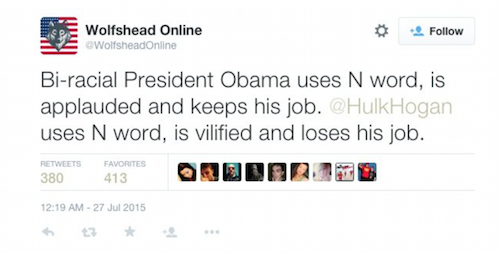 He also became the target of Twitter trolls, who started sending fake messages of support, which he unwittingly retweeted. One of the most prominent tweets involved someone claiming to send support from a father and son, when the picture was actually of rapper Drake and footballer Rio Ferdinand.

@HulkHogan Everybody says stuff from time to time, don't forget, me and my dad will always have your back brother pic.twitter.com/rtogY2EbOI

Despite how bad things look in the short term, there are glimmers of hope that the situation can be recovered. Prominent African American athletes including former boxing world champion George Foreman and basketball star Dennis Rodman, who have known Hogan for more than 20 years, have come to his defence.

History also suggests that after the controversy dies down, time will heal the wounds and he may even be welcomed back to the WWE. We take a look at some examples of how other prominent figures dealt with the fallout of controversial incidents:

Mel Gibson
Once a Hollywood heavyweight, Mel Gibson's career was derailed after a DUI arrest in 2006. Gibson was recorded making anti-Semitic comments to a police officer: "F---ing Jews... the Jews are responsible for all the wars in the world. Are you a Jew?"

Such was the backlash, he didn’t work in Hollywood again for four years.

Things looked like they were picking up in 2010, when he starred in his first leading role for nearly a decade in Edge of Darkness. However, in the summer of the same year, he was recorded being abusive to his ex-girlfriend Oksana Grigorieva during a telephone conversation.

Gibson was recorded as saying: "You look like a f---ing bitch in heat, and if you get raped by a pack of n----rs it’ll be your fault. All right? Because you provoked it."

The Los Angeles County Sheriff's Department subsequently launched a domestic violence investigation against Gibson, and the actor pled no contest to a misdemeanour battery charge.

Despite having been caught on tape using anti-Semitic and racist slurs, Gibson has managed to rebuild some semblance of a career. As of 2010 he has been averaging one movie per year, including high-profile roles in Machete Kills and The Expendables 3.

During the mid-2000s Paris Hilton was catapulted to worldwide infamy when a sex-tape with her boyfriend was leaked over the internet. The socialite used the media attention to forge a successful career, a blueprint that was later followed by Kim Kardashian.

Following the revelation, Hilton issued an apology to GLAAD.

"Gay people are the strongest and most inspiring people I know," the socialite said in her apology. "It is so wrong when people bully or put down others for being gay. No one should have to go through that…I am so sorry and so upset that I caused pain to my gay friends, fans and their families with the comments heard this morning."

Despite Kardashian overtaking Hilton in this particular media role, the latter continues to have successful business ventures and reportedly charges $1m per DJ set.

The 81-year-old billionaire was recorded ranting at his personal assistant after she posted a picture of herself with NBA legend Magic Johnson on Instagram. "In your lousy f--ing Instagrams, you don't have to have yourself with... walking with black people," Sterling said in the leaked audio recording.

"Admire him, bring him here, feed him, f--k him, but don't put [Magic Johnson] on an Instagram for the world to have to see so they have to call me," he continued.

The fallout was costly. Sterling ended up being banned for life from the NBA and was forced to sell his team, the LA Clippers, for $2bn to former Microsoft CEO Steve Ballmer. Sterling was also hit with a  $2.5m fine.

The Sterling situation was a case study on how not to respond in a crisis. He took two weeks to apologise for the incident, and when he was interviewed by CNN’s Anderson Cooper, he actually blamed Magic Johnson for the delay and went on to make other inappropriate remarks.

At the time of his very public meltdown, Charlie Sheen was the highest paid actor on TV, banking up to $1.8m per episode for the hit comedy Two and a Half Men.

Production of the show was stopped in 2011, so Sheen could enter a rehabilitation programme for substance abuse. However, he ended up being axed from the TV show after he appeared on the Alex Jones Radio Show where he attacked the creator of the Two and a Half Men, Chuck Lorre.

Among the ranting, Sheen claimed he was underpaid and referred to Lorre as a "stupid, stupid little man and a p----y punk that I never want to be like".

Sheen was subsequently fired and replaced by Ashton Kutcher. The public meltdown attracted worldwide attention, and Sheen’s global profile was boosted in the short term. His Twitter account reached one million followers in record time (subsequently beaten by Caitlyn Jenner). He also embarked on a short-lived stand-up tour and popularised the catchphrase 'winning'.

Things appeared to be back on track for Sheen when he landed the lead role in TV show Anger Management, which aired 100 episodes and ended its run in 2014. However, this role also involved controversy, with Sheen reportedly having co-star Selma Blair fired because she complained about his on-set behaviour.

Currently, Sheen is listed as having two small cameos on IMDB – and it doesn’t appear that he will ever reach the level of stardom and success he achieved with Two and a Half Men.

While Hogan's reputation has been tarnished by this incident, the amount of goodwill he has amassed over the years is likely to soften the blow, and it wouldn't be a surprise to see him in a WWE again.