Thursday, July 16:
National Security Adviser Susan Rice told Reuters in an exclusive interview that the US and its allies have not left Iran with any room to wiggle out of inspections. "It’s not a request. It’s a requirement," she told the news service.

Wednesday, July 15
1 pm: President Barack Obama addressed the media about the nuclear deal with Iran at 1 pm. He both explained the agreement and rebutted criticism of it.

Obama at one point scolded CBS News' Major Garrett for his question on why the negotiations concluded while Iran is still holding US citizens.

The president also made headlines for harshly criticizing Bill Cosby.

Tuesday, July 14
Obama did an exclusive interview with New York Times columnist Thomas Friedman, who had been a critic of negotiations with Iran.

The gaggle of 2016 presidential candidates reacted to the news as it unfolded on Tuesday through statements, spokespeople, and social media. Unsurprisingly, support and opposition broke down along party lines, with only a few GOP hopefuls not outright condemning the deal.

Secretary of State John Kerry sat down with Andrea Mitchell to defend the accord, following a denouncement by Israeli Prime Minister Benjamin Netanyahu, who called it "a bad mistake of historic proportions."

Speaker of the House John Boehner lamented the deal, saying, "The president has abandoned his own goals." He added that the agreement "will only embolden Iran – the world’s largest sponsor of terror – by helping stabilize and legitimize its regime as it spreads even more violence and instability in the region."

BuzzFeed revealed the White House’s talking points on the agreement. They emphasize that the US "refused to take a bad deal."

Congress, which has 60 days to review the agreement, is gearing up for a showdown, but the president made it clear he’ll have a swift answer to any rejection.

Obama: I will remind congress u don't make deals with your friends, I will veto any attempt to reject this deal. #IranDeal

Former Secretary of State Hillary Clinton’s comments in the hours following the deal were "restrained" because it is a double-edged sword for her as she begins her second quest for the presidency, according to Reuters.

7 am: Obama addressed the nation in a speech from the White House on Tuesday morning. The White House’s communications office broke down details in a series of infographics released on WH.gov. 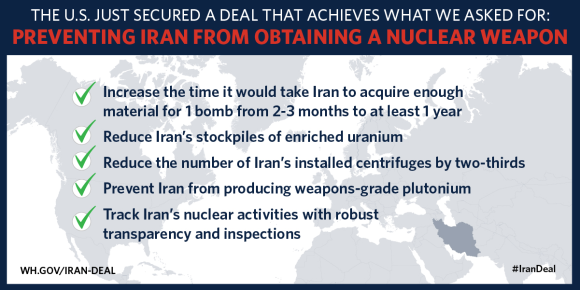 7 am: Iranian President Hassan Rouhani, speaking at the same time as Obama, called the deal a "good agreement," in remarks to his country on Tuesday morning.

"I announce to our people that our prayers have come true," he said.

UK Foreign Secretary Philip Hammond tweeted that he was having "constructive" bilateral talks with Sergey Lavrov, the Russian foreign minister. When news of the deal broke, he followed it up with another tweet saying, "We finally got there #IranTalks," accompanied by a picture alongside Kerry and others.

#IranTalks done. We have the agreement. #IranDeal

The Campaign for Nuclear Disarmament also welcomed the deal, issuing a statement quoting its general secretary, Kate Hudson, as saying, "The outcome of these negotiations shows what can be achieved through dialogue and negotiation, even in the face of intense opposition to any talks from some quarters."

6 am and earlier: Reports of the deal circulated in the early morning on Tuesday before its formal announcement at 7 am.