With a population of 1.3 billion, China could become one of the sweetest markets on earth for Jolly Rancher, an iconic candy favored by American youth for generations. China’s confectionery market was growing by leaps and bounds, 10-15 per cent annually, and fruit-flavored candy was the fastest-growing segment, at 36 per cent market share.

But Jolly Rancher faced a great wall. The brand, made by Hershey, was unknown in China. It needed an opportunity to turn Jolly Rancher into a favorite among Chinese youth. Hershey targeted the huge second-tier cities of Wuhan and Hangzhou for pilot product launches rather than the first-tier megacities of Shanghai and Beijing.

Hershey internal research had shown that advertising was the most effective form of marketing to drive sales of its brands on a global basis. Would advertising prove to be the best sales driver in China too?

Hershey wanted to find out, so it pitted a three-month-long Wuhan-based public relations effort against a five-month Hangzhou campaign that had twice the budget, all of it spent on television advertising.

The Wuhan team was tasked with creatively launching the Jolly Rancher brand in a hotly contested market, and making a distinct impression on a young target audience already tired of sweets. The PR effort had to sustain brand reputation if the candy was to compete across China. 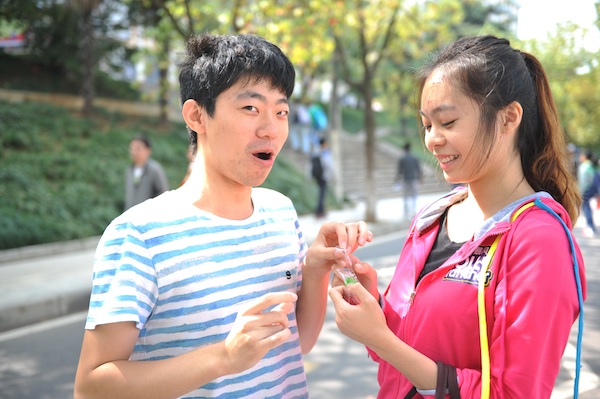 If the campaign to reach China’s whimsical youth, they would have to view Jolly Rancher as more than just another fruit candy brand; they would have to link it to formative college experiences easily remembered in adulthood. Jolly Rancher had to be regarded as the taste of college – the perfect flavor for a time of verve, passion and newfound independence. Research showed that over six decades in North America, the candy had accumulated brand assets of "vibrancy" and "boldness", which if communicated effectively in China would resonate with college students. The strategy was to engage and own the association between Jolly Rancher and a vibrant, bold college life.

In order to appeal effectively to Chinese millennials, Jolly Rancher strategically identified, secured and joined students during the opening day for freshmen and for the annual Golden Autumn Dance Competition, Wuhan University’s oldest cultural festival. Candy samples were first distributed to freshmen in celebration of their college arrival and the start of their campus adventures. Soon afterward, Jolly Rancher girls with bright smiles and fruit-colored outfits roamed campus to spread the Jolly Rancher story, distribute product samples and encourage social media responses. As a result, Jolly Rancher went viral with the target audience. All these "firsts" were captured and capitalized on through image sharing on social media.

Peer-to-peer millennial networks drive brand awareness organically, so students were encouraged to take photos with the Jolly Rancher cheerleaders and share their first taste of the candies by posting on micro-blogs. They celebrated Jolly Rancher as the perfect post-exercise refreshment, as "Singles Day" expression of love, and as a great Halloween treat.

The brand made a big splash at Wuhan University; over 19,000 students tasted Jolly Rancher candies and during two sampling days, more than 100 students posted on micro-blogs, sharing photos with Jolly Rancher cheerleaders during their "first taste". On school media, more than 15 branded reports were monitored.

Hershey’s research showed two per cent of Wuhan survey respondents were exposed to the campaign. Compared to Hangzhou, where TV advertising was used, the PR campaign created equivalent brand awareness with a higher ROI. According to Nielsen, the Wuhan campaign led to nearly double market share as Hangzhou, despite significantly greater investment in Hangzhou advertising, therefore exceeding client objectives.