Meanwhile, almost as many (28 per cent) said a lack of skilled people would have the biggest effect, according to a survey of 1,500 senior internal comms professionals in the UK by Question & Retain. 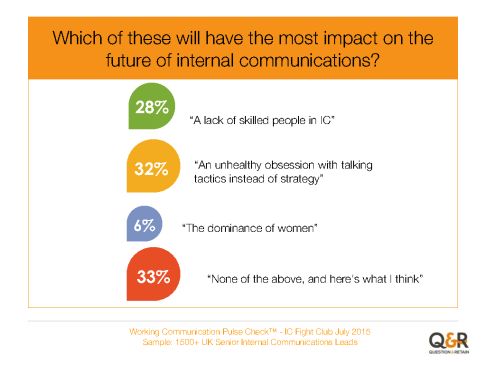 Of those who believed the lack of focus on strategy would have the greatest impact, some of the comments included:

- "Every person in the organisation wants to talk tactics without thinking what is it they want to achieve and what is the strategy."

- "Organisations agree they need to communicate with staff but don't know why."

Those who cited the skills shortage made comments such as:

- "More resources are still generally given to external comms/PR without enough time and effort put into understanding internal stakeholders."

- "Everyone thinks they understand communications and are a good writer. For internal communications to succeed it needs to be recognised as a professional skill throughout an organisation and properly resourced."

However, one third also gave "none of the above" as their answer, and instead offered a range of alternative suggestions, including:

"The changing expectations of the audience. Millennials expect to be able to access information on their terms, via their own devices. They won't settle for an email announcement cascaded downwards."

- "Technology solutions, and new and different tools to engage with employees."

More controversially, six per cent of respondents chose a fourth option, agreeing that the "dominance of women" would have the greatest impact on the future of internal comms.

One person who chose this answer wrote: "Let me preface my response by saying the best people I ever recruited were women. However, in internal comms at present, too many leaders still see it as a fluffy, unimportant activity, just trying to make people feel good. As a result, they see it as an activity more suited to women.

"Nowhere is this more evident than in banks, as a counterpoint to the otherwise prevailing macho culture."

A number of these issues were debated during a panel session last night at the Westminster office of Ellwood Atfield.

The gloves are off! Thanks to our #icfightclub panel @QandR . A feisty, fun debate on the pic.twitter.com/D1RGgtuyEe