Apparently, Klein is to lead a high-level conference on the environment set up by the Catholic Church. But you can’t help wondering why one of the world’s greatest communicators (the Pope) needs or even wants the help of Klein. True, she is a great communicator. But she’s also an atheist.

It turns out that it’s not really her climate change credentials that he is after. The Pope is famously radical and a key part of his analysis is that he thinks consumption and consumerism is a bigger problem than a growing population. Well, he would, wouldn’t he?

Klein is best known for her anti-consumerist views. While the activist has expressed pleasure at the Pope’s appointment, it remains to be seen how pleased she will be when she wakes up to the fact that she is being used as a beard for the Pope’s conflicted position on global warming and population control.

The Vatican’s environmental message strikes a chord on social media

The big climate change comms story this month has been the Papal Encyclical Laudato Si, in which the Pope warned that mankind’s recklessness is taking the planet to "breaking point", and that talk of an environmental doomsday scenario should be taken seriously.

It is clear that his message was taken very seriously on social media. According to social media monitoring company Talkwalker, there were 1.2 million climate change posts in June and 218,000 of them mentioned the Pope’s intervention.

A quarter, or 55,000, of these appeared on 18 June, the day the encyclical was released, showing that immediacy is a key feature of social reaction. In comparison, David Cameron was mentioned just 195,000 times.

In terms of response, 12.9 per cent was negative. This included US Presidential candidate Rick Santorum, who felt the Pope had no right to comment on climate change. Almost half, 49.5 per cent, was positive while 37 per cent was neutral.

The encyclical seems to have appealed mostly to a male audience. Talkwalker’s analysis reveals that two-thirds of those mentioning it on social media were male. 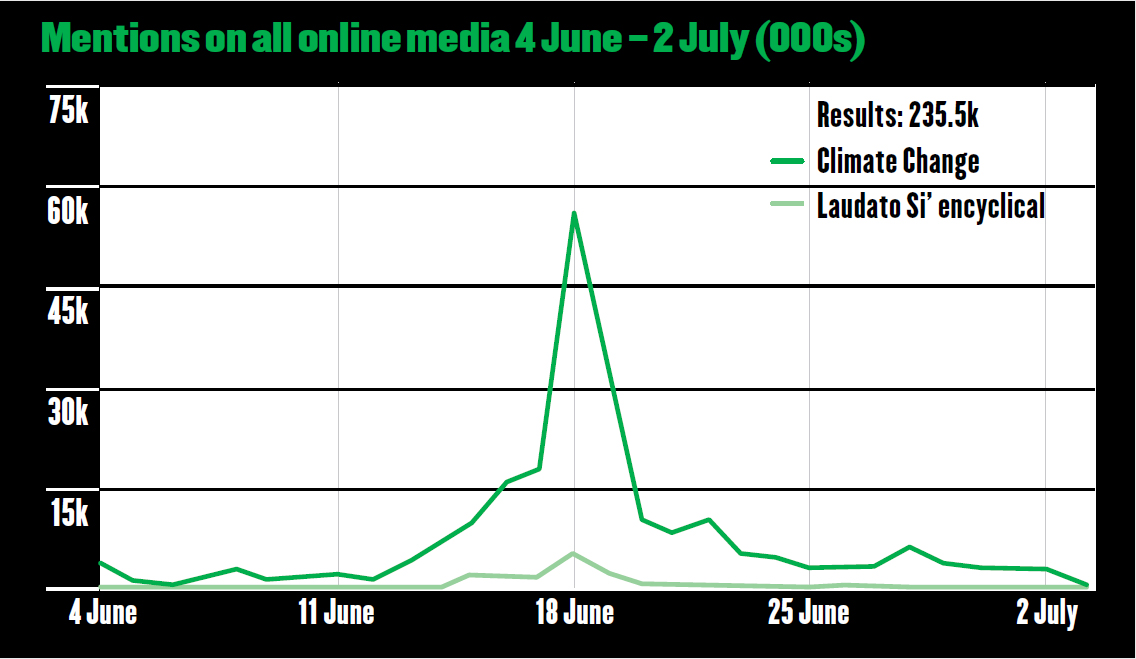