Ruder Finn SVP of reputation management Charles Lankester said the technology was built from "the ground-up" to provide a multi-language, multi-market, multi-channel platform specifically for Asia.

"We have seen that solutions built in the States or the UK do not always translate to Asia very well." he said. "We have built this on a market by market basis. In India, SONAR is Indian, in China, it is Chinese, and it reflects the social media landscape in each market, which we know is entirely different across the region. "

Partner and managing director of Daylight Partnership David Ko said: "We wanted to address a very important issue, which was support for Asian languages. If you look at a lot of the other globally-based tools, most of them do not support this."

SONAR has the ability to operate in any language, including Chinese (simplified and traditional), Hindi, Bahasa, Korean, Japanese and English, and simulates all the leading social media channels, with the precise portfolio being market-dependent.

The training begins with a specific event on social media and then escalates across digital platforms, traditional media and the stakeholder base, with the nature of the crisis agreed with the client in advance.

During the simulation, a core team of 10 Ruder Finn and Daylight Partnership staff are involved as bloggers, reporters, officials and stakeholders, with real-time updates across all media platforms. 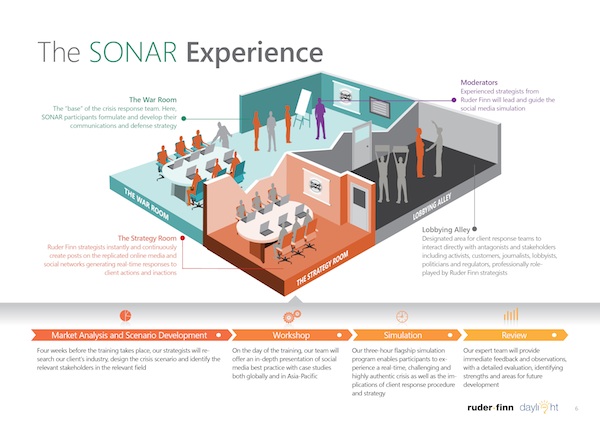 Weber Shandwick was the first out of the blocks with social media simulation, launching Firebell in 2010. An Asia version was unveiled in late 2011 before an updated platform was introduced last year, featuring Weibo and WeChat.

Other agencies also have their own versions, but Lankester believes demand for such services will grow in light of a number of high-profile social media crises, especially if the simulation can accurately reflect social media activity in each local market.

"We have seen an extraordinary series of high profile crisis situations in the past 12 months where, time after time, senior management is widely criticized for poor crisis management capabilities.

"SONAR is fast, effective and for Asia, it is as local as it gets. We have a suite of assets for each country so if a client operates in multiple markets, we will tailor the simulation to replicate that."

Early simulations with a number of clients have revealed two broad challenges; speed of response and decision-making.

"There still seems to be an attitude sometimes that no action is the right action. And that is something that has to change," said Ko. Many companies have real difficulty in moving as quickly as they need to."

Lankester said at the end of a SONAR session, clients were much clearer about where they responded well and what gaps or weaknesses existed.

"It is not uncommon for an organization's crisis management handbook to be chucked in the bin after the exercise," he added.

"Most of these are close to worthless in 2015 because in many cases they are built around something that was written in 2005 and updated as something of a chore," he added.