Only six chief executives of the top 10 NASDAQ tech companies are active on Twitter despite all of them having accounts, according to Talkwalker, which sifted through two million search results over the past three months.

However, Zuckerberg was second only to Tim Cook of Apple for the number of mentions of him by other social media users as well as share of the social conversation. 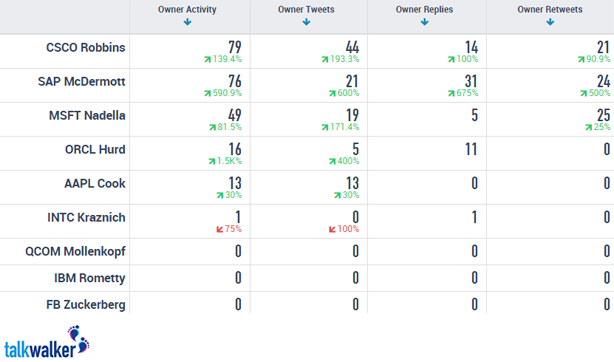 Talkwalker also found that tech chief executives stay faithful to their own firms. Zuckerberg did not tweet or post on Google Plus but used Facebook to tell his 32.7 million followers about acquisitions and donations, while Google chief executive Larry Page avoided Twitter and Facebook, but used Google Plus irregularly to tell his 9.29 million followers about company news.

A previous study by Talkwalker found that only eight of the top FTSE 100 chief executives tweeted at all.

Robert Glaesener, chief executive of Talkwalker, said: "In the sharing economy, the ability to captivate an audience is now a critical component of the tech CEO’s skillset. But while more and more people flock to Twitter, Facebook and LinkedIn, tech CEOs are still trying to work out the pros and cons of joining them."