What a crazy, inspirational, disruptive, thought-provoking, creative, hedonistic, tragic, and exhausting week it was in Cannes.

The Festival of Creativity grows larger and larger each year, each time trying to outdo itself in terms of numbers of people attending, amount of content, celebrity involvement on the speaker stages and surrounding events, awards handed out, and bottles of rosé and champagne drunk.

A total of 13,500 delegates experienced seven days of content from more than 500 speakers – there were 37,500 awards entries. You do the math on how much that adds up to in revenue and you can see that the organizers will be leaving the Cote d’Azur in a very happy frame of mind. And fair play to them – the whole event is run with military precision and is an incredibly impressive operation.

Indeed, two festival-goers were so excited by the event they decided to have sex on the red carpet outside Le Palais in the early hours of the morning after the PR, Media, Glass, and Outdoor Lions had been handed out.

AdWeek digital managing editor David Griner’s tweeted photo of the amorous couple quickly went viral on social media. It has not been confirmed whether they were from the PR sector, though they were clearly a fully integrated medium by the night’s end.

Mad respect for this couple having blatant sex on the #CannesLions red carpet just now. pic.twitter.com/JVgVYIsC8z

There was also real tragedy during the week. Our condolences go out to the families and colleagues of two people who died: a Google executive who was involved in a road traffic accident last Monday and a journalist who collapsed and died in the press room on Friday.

And this year’s festival ended on a surreal note, when local taxi drivers blockaded roads near the airport on Thursday in protest against ride-sharing company Uber, which they perceive as acting in unfair competition to them. 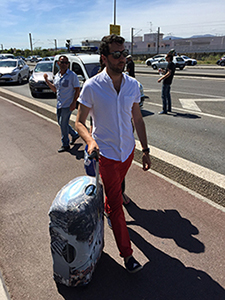 Delegates heading to Nice to catch their flights home – those unfortunates who couldn’t hop in a helicopter, at least – had to be dropped off a mile from the airport and make their own way through the last part of their journey in sweltering heat.

Those who weren’t in Cannes and who had no doubt grown heartily sick of tweet after tweet involving people swilling glasses of rosé amid amazing ocean landscape pics from La Croisette would have seen this as schadenfreude, but actually the airport scenes bordered on dangerous.

Limousine drivers transporting Cannes delegates to the airport faced a barrage of eggs and other missiles. Cars were set on fire. Statues and cars were daubed with slogans such as "Je suis taxi" and "Je ne suis pas Uber."

It was certainly disruptive, though maybe not exactly in the way envisioned by panelists at a discussion PRWeek hosted earlier in the week in partnership with MSLGroup.

Coincidentally, given what happened later in the week, the panel also included Uber’s EMEA head of communications Gareth Mead, who presciently noted that "disruption is a scary word for a lot of people, unless you're the one doing the disruption... Regardless of whether you're the creator or the respondent, that fear can drive lots of different kinds of behavior."

It is certainly scary for the incumbent taxi industry, but Mead suggested it wasn’t Uber that was the truly disruptive element in the new mix. "Uber is often described as a disruptive company, but actually the disruption was the smartphone," he pointed out.

He characterized Uber as "founded with an idea and very entrepreneurial CEO," with the challenge now of sustaining that spirit and idea at scale.

In such a volatile and disruptive environment, and with a business model that relies on third-party entrepreneurs who aren’t directly employed by Uber, Mead said, "Every day there is an opportunity for us to screw up, somewhere. [There are] over 1 million trips every day and these are not employees of Uber, they are entrepreneurs having a relationship with those customers."

People fear the disruption Uber brings to the table and Mead understands that if the touch point of his brand is "the person who isn't even an employee," then the dialogue is even more important – and every individual regional market is different.

As Cannes delegates dodged the eggs and other missiles raining down on the cars of their drivers taking them to the airport, they could reflect on the truism of that latter fact, but also that the dialogue Mead refers to will require skilled communications professionals at the top of their game if it is to be effective.

An extended eBook version of the ‘Building a House of Disruptive Innovation’ discussion in Cannes will be available in July.