Michael Steel, press secretary to Speaker of the House John Boehner, is reportedly joining the PAC of presumed presidential candidate Jeb Bush in a key policy and communications role.

The PAC will name Steel as an adviser, according to Politico.

Boehner called Steel "a pro’s pro" in a statement to the website. "For more than seven years, I have relied on his ability to dissect an issue, win a debate, and deal openly and honestly with the press." 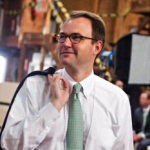 Steel spent five months – July to November 2012 – as Rep. Paul Ryan’s (R-WI) press secretary, when the Republican phenom was on the GOP ticket along with Mitt Romney, according to LinkedIn.

In December, Steel made his own headlines for using, as Roll Call put it, an "equine descriptor" picked up by microphones to describe some reporters’ questions to his boss.

While the former president’s brother hasn’t officially declared he’s running for president, he was one of the first potential contenders to form a PAC – Bush’s is called Right to Rise – last December.

The former Florida governor spoke at the graduation ceremony of Liberty University – also the site of Texas Sen. Ted Cruz’s announcement – over the weekend, touting his faith "to shore up his bond with the conservative wing of his party," according to The Washington Post.

Bush’s net favorable rating lags behind those of his already declared GOP rivals, according to a recent Wall Street Journal/NBC News poll.

Steel joked about relocating to Miami on Twitter on Monday morning.

.@CritterDJ Already asked @Timodc is I have to dress like this. He said, 'yes.' pic.twitter.com/M0b55EeKwe

Big get for Jeb, big loss for the Capitol. Congrats @michael_steel.

Is the convention center available for the @michael_steel DC send off?

The future of storytelling is grounded in data

Shining a light on the ugliness of anti-Semitism

‘Do no harm’ applies to startups, too. Healthcare marketers on harsh prison sentence for Elizabeth Holmes