On Saturday, March 14, prominent Singaporean blogger Xiaxue published an email from a Gushcloud account executive on her blog. The email, signed Doreen Tan, essentially encouraged the blogger network’s influencers to conduct a smear campaign on behalf of its client, Singtel. The email singled out Singtel’s rivals, M1 and Starhub, as targets, and promised rewards linked to Singtel’s offerings. Both M1 and Starhub have subsequently appealed to Singapore’s Infocomm Development Authority for an investigation.

Setting aside the open and ongoing rivalry between Xiaxue, who is a shareholder in competitor blogger network Nuffnang, and Gushcloud, the email is legitimate, as confirmed by statements from both Singtel and Gushcloud issued yesterday evening. 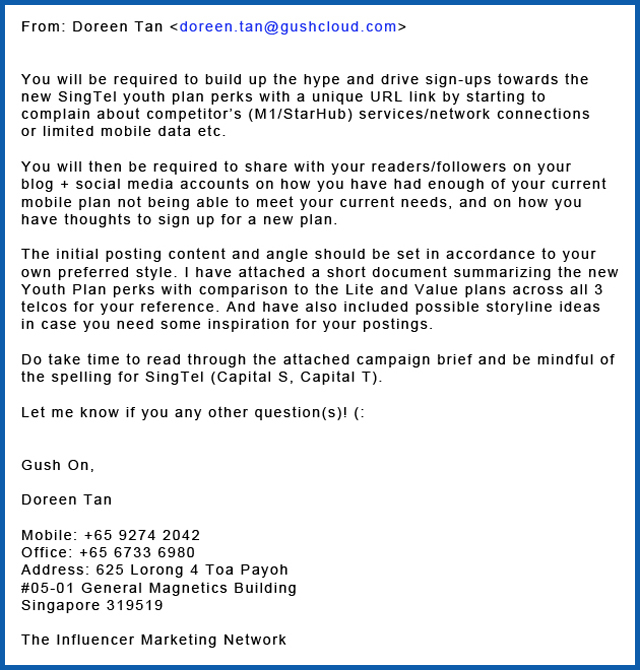 Singtel’s latest statement, which follows one issued on March 14, clarified that it had appointed Gushcloud to handle a digital youth campaign in June 2014. The telco admitted that its employees who worked on the marketing campaign had failed to "adhere to Singtel’s marketing standards":

As an organisation, we maintain high marketing standards and do not condone negative campaigns or publicity against any individuals or organisations. Our focus has always been on the strength and differentiators of our products and services.

We apologise for this isolated incident.  We will emphasise to our staff and agencies our marketing standards and the importance of adhering to industry guidelines including the Singapore Code of Advertising Practice," concluded the statement.

Gushcloud released a simultaneous apologetic statement that stated the email brief sent to its influencers was crafted following discussions with the client’s project team. However, it took responsibility for not "knowing better" and making "better recommendations to our client."

"It goes against the management’s belief to use the Internet for spreading negative messages," wrote Gushcloud CEO, Vincent Ha. "We stand for a better and safer internet, because that is the environment we want our children to grow up in. But it was also my responsibility to ensure that a clear code of conduct and the necessary guidelines were put in place for my staff. The fallout from this episode that my team and our influencers went through was unpleasant to say the least and I would like to apologise to them."

Ha further added that he and his team were making reparations by initiating talks with industry partners, established companies and regulatory bodies to create guidelines for the influencer marketing industry. He also promised that Gushcloud would be educating its team and influencers on a clear code of conduct and had also started an internal audit of its business.

Who is at fault?

The easy answer, of course is that both parties are to blame. But when it comes to implementing best practices and measures that ensure ethical behaviour, most of the experts we consulted agreed that the bulk of the responsibility stood with the client.

"Agencies are acting on the brand’s behalf… brands need to onboard agencies on the organisation’s policies in conduct, ethics, communications and marketing," said Greg Paull, principal of agency-client relationship consultancy, R3.

Simon Kemp, regional managing partner of We Are Social Asia, agreed, stating that once an agency has been appointed, marketers need to take responsibility for their agency’s actions just as employers take responsibility for their employees. "It's up to the brand team to work in partnership with agencies to ensure all activities are appropriate before they become public," said Kemp.

Historically however, an organisation’s policies on ethical conduct are more often shared with its PR agencies than with advertising and digital agencies, noted Paull. "Legal compliance and clear written guidelines with examples of ‘dos’ and ‘don’ts’ will help in guiding ethical behaviour as well."

This may be due to several high-profile ethics violation cases coming to light in recent years. Among the most prominent was Facebook’s smear campaign against Google by Burson-Marsteller and the expose on ‘black PR’ in China, which allegedly led to the arrest of Edelman China’s CEO, Steven Cao.

This latest incident, however, is further proof of the ad industry’s increasingly blurred lines and has shown that brands will need to extend the same treatment to all its agencies.

To close the gap between intent and execution when it comes to social-media strategy, Marc Ha, MD of Text100 Singapore recommends that brands publish their guiding principles as a preface to every brief it issues to agencies to ensure there is no room for ambiguity. It's also up to brands to establish a rigorous review and approval process including briefs the agencies provide to subsidiaries they engage.

Is auditing the solution?

While conducting a thorough audit of its practices now is a positive step for Gushcloud to take, would forcing agencies to submit to a continual third-party audit avert a crisis such as this? Not so, said Kemp. "Because auditing would happen after the event when it’s already too late."

The situation in the social space isn’t exactly comparable to that of the recent controversy involving Mediacom Australia, added Kemp. "That situation may have been prevented with an audit. The same problems extend to the ongoing fiasco around digital media views and clicks too. If we're to re-establish trust in media, I think we do need some kind of independent audit, but that would inevitably entail additional fees somewhere in the chain."

But Paull disagreed, stating that in general, year-on-year third-party audits would be best practice for both clients and agencies. "An objective audit might reveal bad practices, but will also show up the additional value-add from agencies. This will encourage better transparency and trust between clients and agencies," he said, adding that R3 has worked with clients such as Visa, Samsung, Telkomsel and Nestle to conduct annual audits. 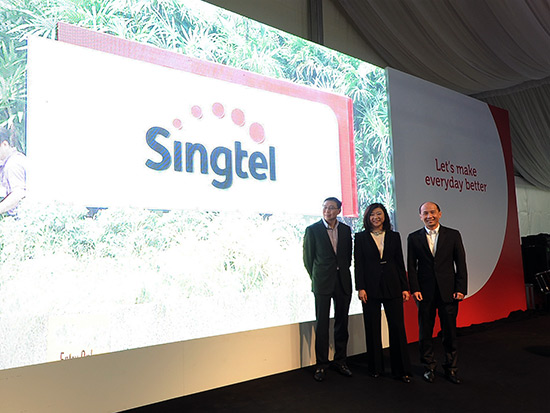 That Singtel immediately stepped forward to condemn the negative campaign is a great first step, said Tan. "This is a great opportunity for Singtel to show accountability over its end-to-end marketing approach," he said. "Singtel should look at this as a chance to clarify and set the precedence on its values and the strategy review of how it approaches partners and marketing as a whole."

Singtel, however, is limited in the actions it can take if legal proceedings are involved. "Given those legal complications, Singtel may only be able to reiterate their disapproval of this activity as publicly as possible," said Kemp.

The telco would do well to actively participate in the IDA’s investigation and champion the call for improved guidelines, recommended Paull.

Will anyone work with Gushcloud again?

The blogger network’s reputation will definitely take a hit, and this incident has thrown doubt on its ethical and professional conduct, said Paull. "Having said that, they are still one of the major influencer companies available, and some clients will still work with Gushcloud but will demand more transparency."

Nevertheless, Gushcloud faces an uphill task to clear its name and re-establish itself with current and future clients, said Tan. "It will need to take significant steps to have a fighting chance in the future."

Speaking in general about missteps and faux pas, Text100's Ha commented that the industry is one that constantly seeks to push the boundaries of audience engagement. "It's inevitable that mistakes happen. What's important is that all of us take these lessons to heart."

Overall though, this incident is useful in highlighting the need for brands to be scrupulous when selecting agencies and partners, when briefing their needs and when reviewing those partners’ proposals before they go live, concluded Kemp.

Update: Singtel has apologised and announced on March 19 that it has terminated its account with Gushcloud.