NEW YORK: Although journalists want multimedia content included in story pitches, they say it is an "enthusiasm killer" if it is delivered in a scattered and inaccessible way, according to a study released on Tuesday.

Multimedia content distributor Isebox conducted the Web survey, which found that, despite restrictions on file-size attachments, most PR pros prefer to use e-mail to deliver multimedia content to journalists. Dropbox is the second-most-popular method of sending content, followed by placing digital media on USB keys and hard drives and "snail mailing" them to media outlets, according to the study.

Including photos, infographics, or video is very important for creating effective and engaging content, said 80% of the 20,000 North American journalists surveyed. However, using such distribution modes has forced 80% of respondents to spend more than 30 minutes collecting content.

"The modern-day journalist isn’t the one from five years ago; they are now more agile, fast, and driven by this social media and instant, 24/7 news cycle we have today," Isebox CTO Salvatore Salpietro said. "The tools a lot of PR pros are using aren’t keeping up with that trend; they are distributing content on multiple platforms, which is scattered and laborious both for the corporate comms person as well as the journalist."

Of the survey participants, 68% said their job has become more difficult in the last five years. Fifty-two percent of journalists are producing at least five articles per week, with almost 20% producing more than 11 articles every seven days.

Salpietro explained that PR pros have a tendency to shift the responsibility to media outlets to source content.

"The number of articles journalists are writing every week speaks even more to the point that they are time-starved and they need tools that are going to make their jobs easier," said Salpietro. "PR pros that adopt that way of thinking will be the ones that get the most and best coverage."

The survey was distributed blindly and took place over two weeks at the end of October. 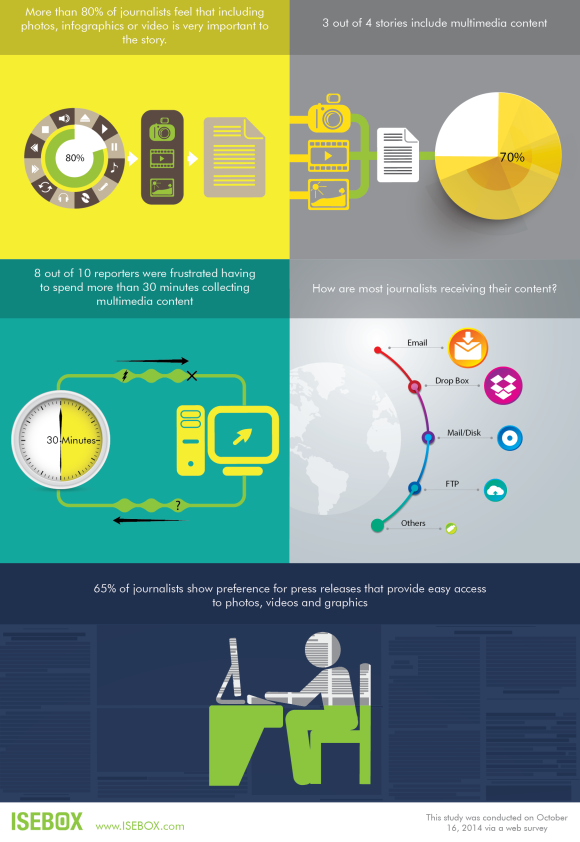