NEW YORK: More Americans – and Millennials in particular – are embracing the latest technologies to benefit their health, according to the fifth-annual Pulse of Online Health survey from Makovsky and research firm Kelton.

Two thirds of respondents (66%) were open to downloading health-related mobile apps. Reflecting "proactive desires for informative, functional, and interactive programs," according to the survey, 47% said a diet-tracking or nutrition app was their first pick, followed by medication reminders (46%), symptom-trackers (45%), and apps monitoring physical activity (44%).

"The power of now is becoming greater and greater among the Millennial generation," said Gil Bashe, EVP at Makovsky Health, adding that generation is "more ready to jump to that digital divide faster."

He added that Millennials see the "smartphone as an extension of self," so they often seek information online before talking to a healthcare professional. Meanwhile, a Baby Boomer might be more inclined to have a conversation first.

In terms of wearable devices, 79% would be willing to use one to manage their health, according to the poll. Respondents more specific reasons for doing so were tracking physical activity (52%), checking symptoms (45%), managing a personal health issue or condition (43%), keeping tabs on sleep patterns, (41%), and managing diet and nutrition (39%).

It also found that 88% of Americans would be willing to share their personal information to improve care and treatment options.

In terms of where consumers go for health information, WebMD easily surpassed its government-run rivals, with 57% of respondents saying they visit that site, beating 17% for the Centers for Disease Control and Prevention and 16% for the Food and Drug Administration.

Bashe said trust is a critical factor for WebMD besting its rivals, but it’s also easier to navigate.

Afshin Mohamadi, MD at Kelton, noted that WebMD is accessed widely across demographics, giving it authoritativeness that other portals don’t have.

The survey prompts the question for pharmaceutical marketing professionals of "what does your customer want that you can provide?" said Bashe. 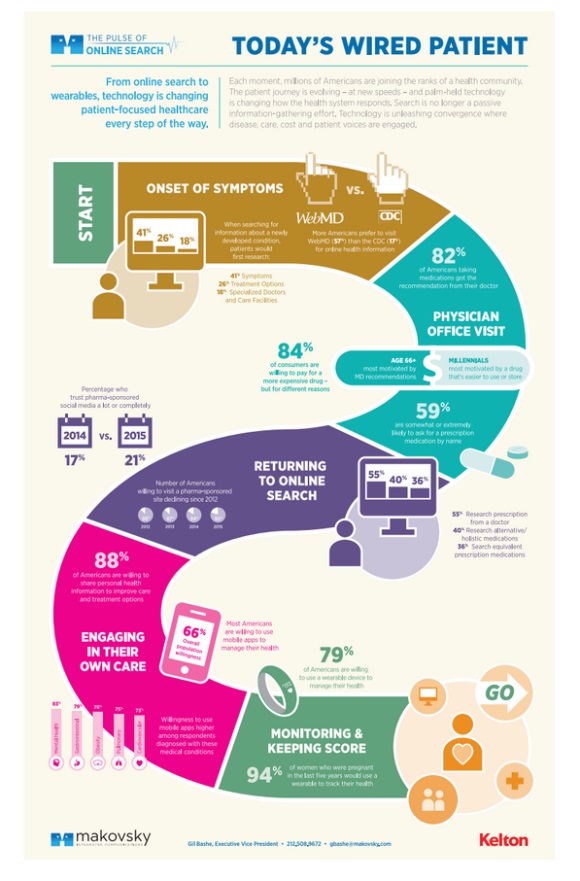