Press releases provide reporters with actionable news that is highly relevant to their readership. Yet with so many reporters using press releases, why are so many stories not covered? Maybe it is the content the release contains.

So how do you ensure that you are providing journalists with what they need?

1. Get to the point.
Use the headline to engage the reader. Let reporters know right away why they should care about your press release.

Use your first paragraph to fill in the blanks, not merely repeat the headline. If readers have to find the purpose buried in the fourth paragraph, they have already lost interest.

According to a survey of 100 journalists included in the report "Disrupting the Press Release" by PR firm Greentarget, nearly 70% of the participants spend less than one minute reading new press releases. Make your 60 seconds count.

2. Is your headline actually helping?
While the headline is essential, and some say the most important element of a press release, it is often the most obscure. A headline should immediately tell readers the "who" and "what" of your press release. Does this look familiar?

Can you tell who issued this press release? And, after reading the headline, why should you care?

A good headline should be descriptive and concise – tell the reader what your news is about to entice them to read further: "Control4 Mobile App Now Available for Amazon Fire Phone."

3. Don’t be a bore. Keep your readers engaged.
If coverage is your top goal, you need to make sure reporters are reading your release. You want to keep them engaged. An easy way to increase readability and usage is to use bullet points. This helps to emphasize key points and organize information in an easy-to-read format.

In the Greentarget survey, 53% of the journalists said they’d find it helpful if the key facts in a release were "presented in bulleted format."

4. Be generous.
You want more people to see your press release, so make it easy to share. Provide hyperlinks to your product. Do you have a Facebook page or YouTube channel? Include a call to action and link to those pages.

To increase shares of your actual press release, use a "click to tweet" call to action to provide the reader the ability to share your news for you. After all, they opened your press release, so you know they are already interested in your story. Let them share it with friends.

In "What Journalists Really Think of Your Press Release," Samantha Murphy Kelly, a tech reporter for Mashable, states that "press releases are an efficient way to get news out to reporters, but often the language used is very dense and tedious to get through." She adds that "subjects can be complicated to begin with, especially when it comes to science and technology, so language that really cuts to the chase and explains the news is most helpful."

6. Don’t be so extreme.
Know your audience. Leave the hard-core sales tactics out of your press release. Greentarget found that journalists want direct media statements that aren’t cute or clever but get to the point quickly. 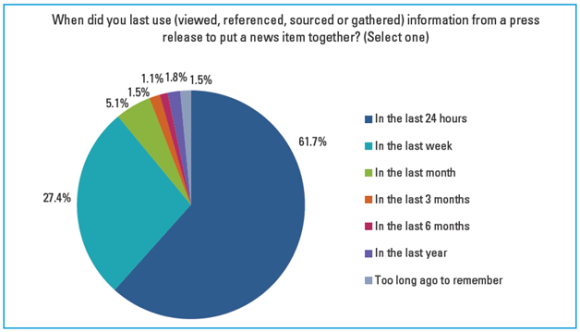 Jahana Hayes is a senior editor at Business Wire in Atlanta.