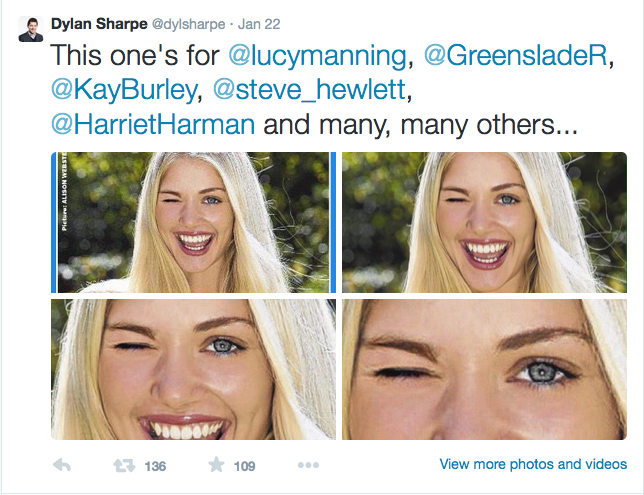 Sharpe's tweet came after it was revealed that The Sun had not scrapped topless women from Page 3, despite reports to the contrary earlier in the week.

The Times, The Sun's sister paper, had reported on Tuesday that it would no longer feature topless women. However, The Sun refused to comment on the matter.

Yesterday, the paper featured a topless model and confirmed that it had not scrapped the feature.

Sharpe has since received death threats over the tweet, he told Buzzfeed.

He has now released this statement, apologising for his actions:

"Hi. My name is Dylan Sharpe. Nominally I’m the head of PR for The Sun, but you may also know me as 'c*ckwomble', 'c*nt' or 'creepiest guy on Twitter'TM. This is my story…

"Most reading this will have avoided a call, or text, or missed an email on purpose. Some readers may have sent out a 'no comment' on behalf of someone else. But few, if any of you will have spent 48 hours telling the nation’s media that a story is speculation, even when the national broadcaster has seen fit to make it their biggest story of the day.

"But that is what I did. Between late afternoon on Monday, until Wednesday evening, I refused to comment on speculation about the demise of Page 3. That was my job and I executed it, despite upsetting a number of journalists I considered good friends.

"Then, on Wednesday night, came ‘the big reveal’. Oh how we laughed. Lazarus reappeared topless on the 3rd page of The Sun, and was tweeted by our official Twitter account and many thousands more. By midnight, anyone who hadn’t yet hit the hay knew The People’s Paper had done it again.

"On the train to the office the next morning I decided it was time for a cheeky dig. Nicole, 22, from Bournemouth was winking – now I’d use that wink to make a none-so-subtle point about ignoring my warnings. But to whom should I send it?

"Steve Hewlett and Roy Greenslade: media commentariat almost ubiquitous on the airwaves over the past couple of days telling us why Page 3 was no more.

"Lucy Manning and Kay Burley: the reporters chosen to front the coverage of ‘the end of Page 3’ by their respective networks.

"And Harriet Harman. I shouldn’t have tweeted to Harriet. She wasn’t involved and, unlike the others, I hadn’t spoken to her. But just before I sent the now infamous tweet I’d seen the graphic, created in Labour HQ, celebrating that Page 3 was no more. I stuck her Twitter handle in – it was a big, stupid, mistake.

"Lucy Manning was first to respond – with a 'ha!'. 'Good,' I thought, 'she gets it'. Then Kay responded, but she wasn’t happy. I like Kay Burley, she stands out among reporters with her easy charisma and charm, but I’d upset her. I started to write an apology but my Twitter mentions were going insane. I flicked down, took a look at what people were writing.

"Someone with a lot of followers thought I’d done it to be nasty. 'No,' thought I, 'it’s funny. It’s not about the naked breasts (which had already been tweeted over 10,000 times by other Twitter users), it’s the wink. I am Nicole. I am the winker (you read that right), winking at the people who I had told the day before not to assume Page 3 had gone.' But it was too late.

"Twitter had decided I was doing it to belittle, to attack, to demean. By 10am I had gained 500 followers, a hate campaign and a parody account.

"By 11am The Huffington Post (whose job, I have learned, is to tell their readers what they should be angry about in The Sun) had written an article about me and how horrible a human I was.

"By midday I was receiving death threats and being told I was the most vile person that had ever lived. I left Twitter alone for a few hours.

"When I returned around 6ish a proper journalist, writing for The Independent, had written about me. Simon Usborne – he normally writes about cycling and the environment – today he’d picked up his pitchfork and joined the hate mob.

"At 11pm the final ignominy. I was backed by a UKIP MEP on Question Time. The nail in my mouldy, hated, coffin.

"So there it is. I continue to be told I’m a c*nt by people who know my name, my job and one tweet I sent. Guilty of gloating I most certainly am. Icarus has well and truly plummeted to earth. But I never meant to offend and I want to apologise to all those I @’ed in that tweet. It was supposed to be funny but clearly I misjudged that one. Now I see if Twitter can forgive as quickly as it can hate…."