In an effort to ramp up its ad revenues over the holidays, Facebook is adding features to its app install ads.

One of Facebook's biggest ad-revenue generators has been ads that allow users to directly install the advertised app with a single click on their phone. Now Facebook is introducing ways to make those app-install ads even more engaging.

1. Reach and frequency
Facebook now allows advertisers to set highly specific performance goals for their ads. Here's how they explain it:

For example, advertisers can set their app ad campaign to reach 5 million people with a frequency cap of three impressions per person for one week. Since reach and frequency optimizes for unique reach, it should only be used for campaigns with brand awareness goals, like those for app launches or updates. 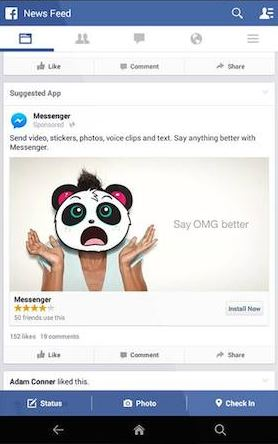 2. Mobile app video ads
Why have a static image when you can have engaging video? Facebook is extending video ad options to app install advertisers, so instead of an image with a button, they can highlight the attractive features of their app into a short, auto-playing video.

3. Device targeting for Amazon
You could already target iOS and Google devices through Facebook ads, and now you can do it for Amazon's tablets as well.

The new features for app advertisers roll out this week.