What a difference a message can make. Until as recently as 2012, roughly half the population of the US believed that global warming either did not exist or had natural causes. This mattered because the US was, and is still, the largest and most ­powerful economy in the world.

But according to a new world map of attitudes to climate change ­produced by ­information group ­Responding To Climate Change, based on climate opinion polls ­between 2009 and 2014, 83 per cent of Americans now believe the US should make efforts to reduce global warming – even if it comes with economic costs.

Clearly ­opinions are changing ­rapidly. One of the major ­contributors to that shift has been a change of strategy by environmental ­campaigners. Until a couple of years ago their message was couched largely in terms of the science – which could easily be muddied and denied. Now campaigners are making a more emotional appeal based on scientific consensus; that 97 per cent of climate scientists agree that global warming exists and is ­man-made. It is a ­simple, powerful ­approach known as a ‘social proof heuristic’ in ­behavioural ­economics – that when facts are unclear we turn to others for guidance. A ­minor shift in strategy, a ­major shift in attitudes.

Nations work together and get social networks thinking positively

Climate change is firmly back on the political agenda. Following a series of intergovernmental events including the landmark deal between China and the US to reduce carbon emissions and the G20 meeting in Australia on 15-16 November, a surge in momentum is clearly visible on social media.

Despite Australian prime minister Tony Abbott trying to exclude climate change from the agenda in Brisbane, hashtag #G20 received more than 312,000 mentions in the run-up to the summit, of which 74,000 referred to climate change.

Activists mobilised on social media with #OnMyAgenda which was used 13,000 times while the most engaging article about the protest was shared almost 15,000 times on Facebook. According to Talkwalker’s sentiment analysis, the #climatechange hashtag picked up 25,000 mentions on 15-16 November, a markedly higher number than last month’s IPCC report.

At the same time pessimistic attitudes towards climate change decreased significantly during the month. The clear implication is that when their governments co-operate, people feel empowered and more confident about dealing with a difficult future. 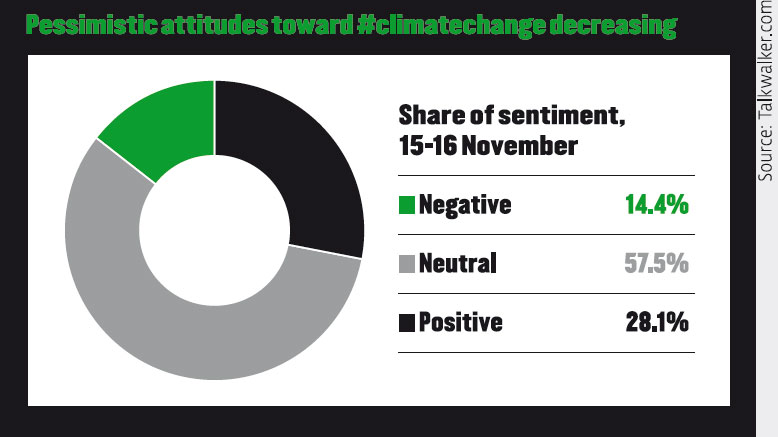