Longtime New York Times advertising reporter Stuart Elliott is leaving the newspaper after more than two decades as part of its latest round of buyouts.

He announced the career move on Facebook this morning. 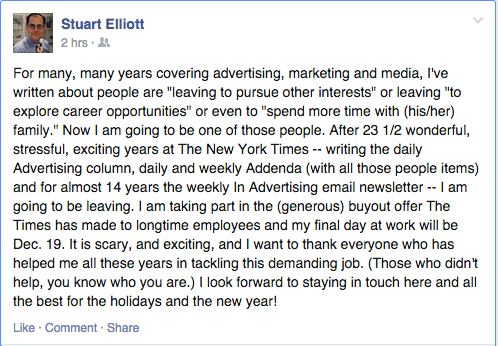 The Times had warned that if 100 staffers did not apply for buyouts by 5 pm on Monday, it would have to cut staff. Its newsroom had about 1,350 journalists, prior to this round of departures.

Advertising executives won’t be the only ones who miss Elliott. A number of PR pros tweeted at the veteran journalist on Wednesday about the effect his departure will have on their media-consumption – and pitching – habits.

With @stuartenyt announcing his departure from @nytimes, plenty of PR firms changing direction on who to give their Super Bowl story too.

Here's to @stuartenyt for years of sharing his smart and always-interesting critical eye on this crazy industry. Great luck.

Good luck to @stuartenyt - one of the best in the biz. Someone has large shoes to fill in keeping PR pros across America on their toes

Congrats to my friend @stuartenyt on his decision to take the @nytimes buyout offer. Best of luck to you in the future!