Every month we look at how the climate change message is progressing through the tangible campaigns and actions that firms are taking, and how ordinary people feel about it.

The centrepiece is an ad that tells the story of Maya, a computer-generated orangutan, who wanders through London marvelling at all the amazing things electrical power can do. According to SSE, the intention was simply to show the benefits of power through new eyes. But the orangutan is an immediately recognisable symbol of man’s destructive relationship with nature.

In that light, the ad isn’t a fresh look at cheap power, but an implicit claim that SSE generates power while caring for the environment.

It is true that 27 per cent of SSE’s energy is generated renewably, but the fact is that 73 per cent is not.

So, either SSE is guilty of incompetence – failing to understand the semiotics of its advertising motif – or, more likely, it is guilty of greenwash by creating the impression that the bulk of its activities are environmentally friendly, when they are not.

UN warning on climate change action gets the pessimists talking

UN secretary general Ban Ki-moon has issued his sternest warning yet on climate change. "Science has spoken. There is no ambiguity in the message. Leaders must act. Time is not on our side," he told the world’s press on 2 November.

Strong words. But do such warnings have any effect on public sentiment?

Generally events receive more attention than reports because they allow greater engagement – and this was a report, cautions Talkwalker, which carried out the analysis. Nonetheless the warning was heavily discussed on social media and online news. Within 24 hours it had been discussed some 57,000 times. The figure almost doubled to 125,000 with 100 hours.

But the most surprising finding was the strength of negative sentiment (people who feel pessimistic about climate change, not deniers). The #climatechange hashtag was used with three times as many negative as positive statements in the UK. From 1-3 November, negative sentiment was at 35.6 per cent, compared with 13.9 per cent positive.

So Ban Ki-moon’s warning was heard. And encouragingly it made a lot of people feel very gloomy. Hopefully gloom is a precursor to action. 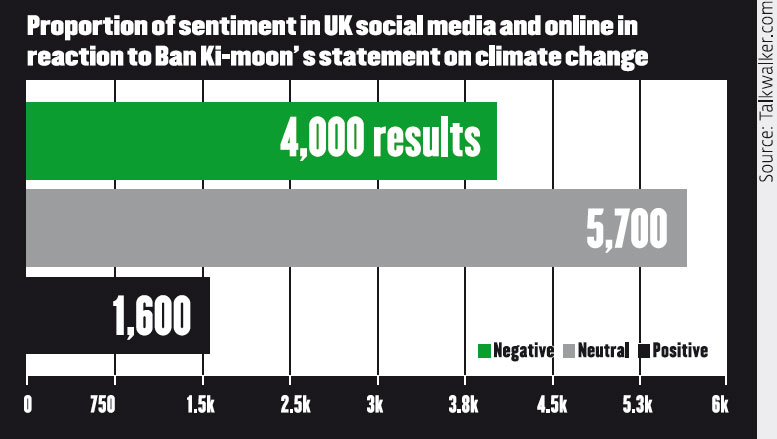