The promotion asks customers to tweet an image of their empty London Pride branded glass using the hashtag #EmptyPint. They will then receive a direct message with a unique code to redeem at the bar for a free pint of London Pride or draught soft drink.

The campaign will run from today until Sunday 16 November and will be available in most of Fuller’s pubs within the M25.

The #EmptyPint initiative grew out of the brand’s 'empty pint' posters, which are part of its £3m 'Made of London' marketing campaign. It will be supported by an outdoor poster campaign, adverts in London media and paid-for promotion on Twitter. Individual pubs will also be encouraged to tweet about the campaign and use chalk board promotion.

Fuller’s has previously used Twitter in a similar way with its #DropofPride campaign, which brings London Pride beer and merchandise to a selection of offices across London on the last Friday of every month.

Group digital manager John Skinner said: "Given the popularity of the empty pint posters, we saw a great opportunity to give our fans a reason to make their own iconic empty pint photo, and reward them for it.  Thanks to the technology in our pubs and a strong social team, we are able to make this a reality." 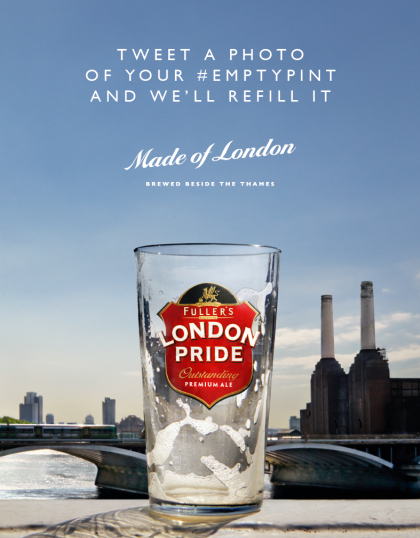