Revenues came in at £214m ($342m / €272m), dropping by £15m, or 6.4 per cent from the same quarter last year, due to the increase in the strength of sterling against the other currencies in which WPP generates its income.

However, on the organic growth measure, which gives a clearer picture of WPP’s performance relative to its rivals, the company was able to claim the barest margin of upward momentum with a 0.1 per cent increase year-on-year.

The company claimed that all regions except Continental Europe showed positive net sales growth in the third quarter, and there was particularly strong growth in content development in the US through SJR. 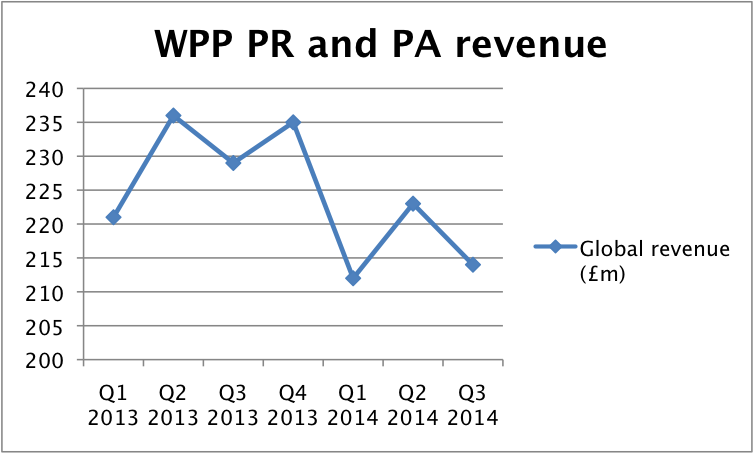 Newly minted Ogilvy PR CEO Stuart Smith was not immediately available for comment. The CEOs of Buson-Marsteller and Hill+Knowlton Strategies both declined comment on the quarterly earings.

However, WPP continues to put in a strong overall performance, with like-for-like revenues up 8.7 per cent on the back of a 17.1 per cent increase in its biggest business stream, advertising and media investment management (a net sales increase of 5.5 per cent).

This outpaced French rival Publicis Groupe, which does not provide figures for its PR division but reported overall third quarter organic growth of one per cent last week.

This story was updated on October 31 with comment from Imperato.