What would you do if you had eight kids who love to play with water balloons during the long, hot Texas summers? Josh Malone invented "Bunch O’ Balloons," a device that attaches to a standard hose and fills and ties more than 100 water balloons in less than a minute.

Malone hired Command Partners to run a Kickstarter campaign to raise $10,000 for mass production and to drive brand awareness.

"We were ready to take the product to market, but we didn’t have clear distribution channels or capital to mass produce and market it, and we hadn’t tested it with consumers," Malone explains. "A Kickstarter campaign was the answer to all of those things. Command Partners had crowd funding experience and the right social media and PR resources."

Strategy
The agency used Malone’s story and family man image in traditional and social media outreach to drive awareness of the product and traffic to its Kickstarter campaign page and BunchOBalloons.com.

"We were excited about who Josh is, the product, and story behind it," explains Alex Stegall, digital marketing strategist at the agency. "We knew we could get the general public as excited as we were by engaging them through pitching media stories and creating content about Josh and the product. The campaign had a lot of visual appeal, especially when showing Bunch O’ Balloons in action."

Tactics
The Kickstarter campaign ran July 22-August 21. The agency created and maintained all aspects of the Kickstarter page, including a how-to infographic and built BunchOBalloons.com.

The team began pitching tech-oriented blogs and websites such as Gizmodo, Mashable, and Buzzfeed in July before reaching out to the big national morning TV shows.

Malone and a local videographer created a product video that shows Malone’s family demonstrating and discussing the product before having fun hurling water balloons at each other. It was posted on the Kickstarter page and YouTube.

Lucky Penny Shop, an online store that sells toys and more and hosts a robust YouTube Channel, posted its own product video after getting a sample from the team. Select journalists and bloggers were also sent samples.

The agency created branded Facebook and Twitter pages and posted photos, fundraising news, and media coverage daily to help drive traffic to the Kickstarter page. Stegall says the team also quickly responded to all questions about the Kickstarter process, delivery dates, and more.

"It was important that Bunch O’ Balloons backers knew how important they were to our success, so we also engaged them daily on social media and asked them questions to get their input," Stegall adds. "For example, we polled them and let them decide on an additional color for the product."

Through a Facebook tab, visitors could enter their email addresses to win a free product and get regular updates on fundraising and product news. Online ads and promoted posts helped drive traffic to the tab. 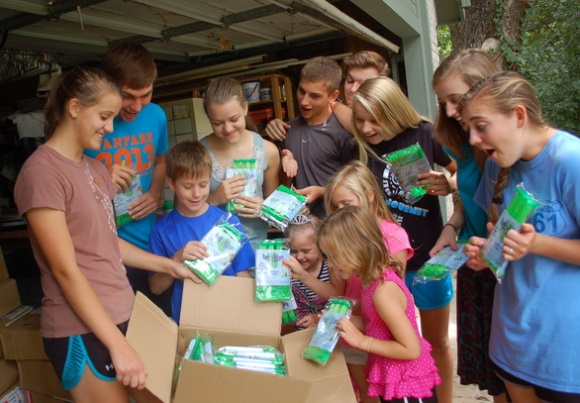 "It was way above our expectations," Malone says. "We met our initial fundraising goal on the first day. We were in a state of shock about the way it just took off."

Malone signed an exclusive deal with Zuru, which will manufacture and distribute Bunch O’ Balloons to a global network of toy sellers including Walmart and Toys "R" Us.

The video had 2.68 million views on the Kickstarter page as of late September. Malone adds that a 20-second demo of the first prototype on his personal YouTube channel, which was not promoted in any way, has gotten more than 1.25 million views.

The Lucky Penny Shop video had nearly 3.4 million views as of early October.

Future
Malone is retaining Command Partners on an ongoing basis.

The team continues to send samples and pitch media outlets and is considering taking the product to industry and consumer events.