Clients create a 140-character message and then rally supporters who agree to let Thunderclap share the message at a specified time.

Cost
Pricing ranges from $45 per campaign to $500 per campaign. A free version with limited features is available.

User
Alexandra Eaton, policy analyst coordinator at the National Association for Music Education, has been using Thunderclap since March 2014.

How do you use it?
It’s really easy. Once you register and log on, you can set up a targeted campaign with a specific end date. Then you put together a message and promote it to your followers.

We’ve done two Thunderclaps and promoted both by posting the link on Facebook and Twitter. We also emailed it to our members.

When people click on the link, they go to a page that shows the message. They’re directed to click another link if they’d like to participate in a Thunderclap of that message. If they agree, the app asks for that person’s permission to post.

You set a tipping point for message supporters  – 100, 300, or 500 supporters, and more. Once you reach that pre-determined number of supporters, the campaign tips and Thunderclap sends out all of those messages simultaneously on the specific date you set.

You must reach 100% of whatever you goal was to have the messages post, but people can continue to support the message after that.

Thunderclap sends automated email updates on the number of supporters you have for a message as you approach your goal. Once you reach it, you get an email confirming your messages will post en masse on the specific date you set. You also get an email after your messages go out that details reach metrics.

Customer support is very good. Thunderclap requires you to have the campaign posted for three days. I needed to shorten that window so I contacted customer support via email. They responded within 15 minutes and changed the time constraint for me.  ?

How does it serve your business needs?
Thunderclap allows us to join forces with supporters all at the same time to get a hashtag to trend very quickly. That boosts visibility for the National Association for Music Education and our objectives.

The first Thunderclap we did was on May 16. It targeted Politico magazine, which is a very influential outlet that policymakers and politicians read daily. The magazine was hosting a Twitter chat that day focused on the importance of STEM (science, technology, engineering, and math) education. The National Association for Music Education advocates for STEAM education, which adds the arts to science, technology, engineering, and math.

We hadn’t previously been able to get a lot of coverage in Politico. For this Twitter chat, the magazine had set up the hashtag #prochat to discuss STEM. Our goal was to make sure that people were talking about STEAM so we set up our Thunderclap using #prochat and #stemtosteam with our message about the importance of adding the arts to STEM.

We had 319 people participate in that Thunderclap, so 319 messages about the importance STEAM flooded into Politico’s Twitter chat. Stephanie Simon, who is an influential education writer for Politico, then talked about STEAM three times during the chat.

Matt Wallaert, a social psychologist from Microsoft, who was participating in Politico’s Twitter chat, responded to a question about the roles creativity and communication play for people in the STEM workforce. He is a musician and a big STEAM proponent, and he subsequently agreed to moderate a congressional hearing for us. We built that relationship through our May 16 Thunderclap.

That first Thunderclap also built stronger relationships with Politico journalists, and STEAM has become a much hotter topic inside the Beltway since.

We had 622 supporters for that message so congressional offices saw a groundswell of support posted across Facebook, Twitter, and Tumblr just as our association leaders were showing up. It really demonstrated to legislators that we’re serious and organized, and that makes all the difference in this political climate.

Our second Thunderclap also built a coalition of supporters and helped fuel a petition we’re working on now. 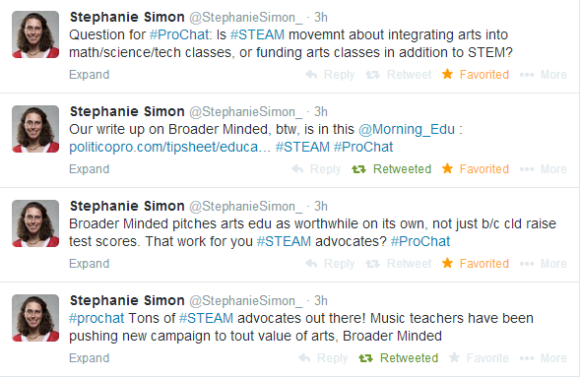 How does it integrate with your existing infrastructure from an IT standpoint?
It’s all Web-based. It doesn’t connect with our CRM.

What are the main benefits?
The strength of Thunderclap is in unifying supporters and getting a really broad reach at a very specific time.

It takes a lot of the guesswork out of social media. It’s incredible for short timeframe promotions.

It’s easy to use and affordable. There’s government relationship software out there that costs $6,000 or $7,000 per year  that isn’t as powerful as Thunderclap.

What are the main drawbacks?
You used to be able to tweet at people, but then Twitter ruled that it’s spam and doesn’t allow it now so you can’t use the ‘@’ handle in a Thunderclap. You have to focus on a hashtag as opposed to an account.

You should be able to send a large number of tweets to a person, especially to politicians. This was Twitter’s decision not Thunderclap’s decision, so it’s not really a drawback to Thunderclap itself.

Competitor
HeadTalker: a free social media message amplification platform that allows users to create messages and recruit a predetermined number supporters. When the supporter goal is met, HeadTalker shares all of the messages simultaneously.