NEW YORK: Nearly nine in 10 consumers want meaningful relationships with brands – but companies aren’t delivering, according to a study released by Edelman on Wednesday.

The agency’s second annual Brandshare report revealed that 87% of consumers want "meaningful" interactions with brands, but only 17% believe companies are delivering. The study, which included reactions from 15,000 people ages 18 and older in 12 countries, also found 70% of consumers feel brands are mostly focused on boosting their profits.

"Despite all of the efforts that brand marketers have placed on having a real relationship with consumers, consumers still believe that their relationship with brands is largely transactional, and we see that as an unrealized opportunity for brands and marketers," explained Jen Cohan, president of Edelman New York.

Two-thirds of consumers surveyed (66%) said they feel like they have a one-sided relationship with brands, where the company asks them to share, but it doesn’t give anything in return.

Cohan said brand marketers need to have "multidimensional and dynamic relationships with consumers that recognize the full breadth of the consumer need state."

Addressing consumers’ desires, such as the want of products that work reliably, and their emotional needs have been marketing strategies for years. However, the study revealed a new one: societal demands.

These extend beyond CSR efforts and include showing consumers that the company has a purpose and is using resources to drive change in the world, according to the study.

When a brand meets all three consumer needs, "there is quantifiable business impact," said Cohan, citing an 8% increase in likelihood to purchase, a 10% jump in the probability to defend a brand, and a 12% increase in the possibility of recommending the company.

Consumers are also more likely to share personal information (11%) and branded content (12%) if all three conditions are met, the study stated.

In response to the report, Cohan said CMOs and senior brand marketers should "evolve" from just storytelling to inviting people to build a story and tell it, including inviting consumers to become part of the product-creation stage. More than half (52%) of participants said they want to be part of a company’s development and refinement process.

She added that brands also have to evolve from focusing on just promise to embracing purpose by incorporating their missions. They should also engage consumers with content that "builds on cultural currency."

Cohan noted a surprising result from the survey, conducted online in August, is "there is remarkable symmetry between consumer needs across countries" such as responding quickly to concerns and complaints. She said the study revealed the same insights across demographics.

The 12 countries included in the study were the US, the Netherlands, the UK, Australia, Brazil, Canada, China, France, Germany, India, Japan, and Mexico. It studied industry sectors such as technology and electronics, food, soft drinks, coffee, beer and spirits, financial and automotive. 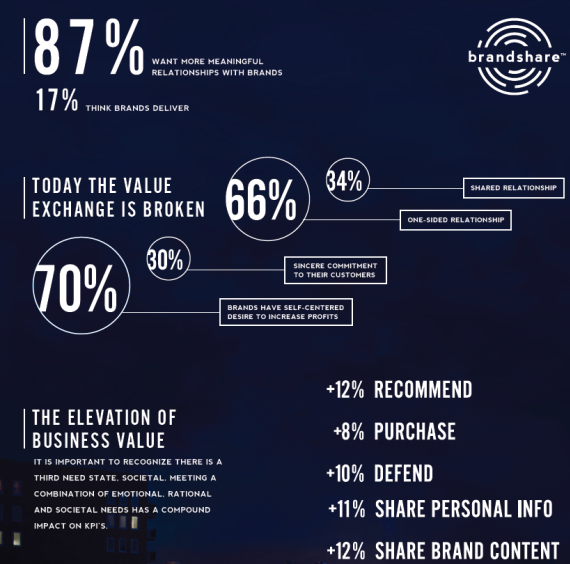