When it comes to being conservative in business Fred Cook does not need any coaching. He comes from Indiana, a conservative American state where frugal business values fuse with conservative social norms. GolinHarris (as Golin was formerly known) had made an acquisition (in the US) a decade or so ago and the firm "paid dearly for it" he told PRWeek on the sidelines of the International Communications Consultancy Organisation (ICCO) Global Summit in New Delhi last week. It was a time of boom and easy credit and "everyone was buying something". but it turned out to be a mistake. "We do not buy for the sake of buying any more," he said.

So when Cook told PRWeek that Golin was about to acquire a PR firm in China with which it done projects with it was not too difficult to make the deduction. Magic Group has offices in Shanghai, Beijing and Guangzhou and its roster of clients include brands such as Lux, Unilever, Mars, BMW, Coca-Cola and Janssen.  "We spent two years getting to know them," said Cook. He likened sealing a partnership into a merger as ‘dating’.  "You get to know over time before you decide to get married." 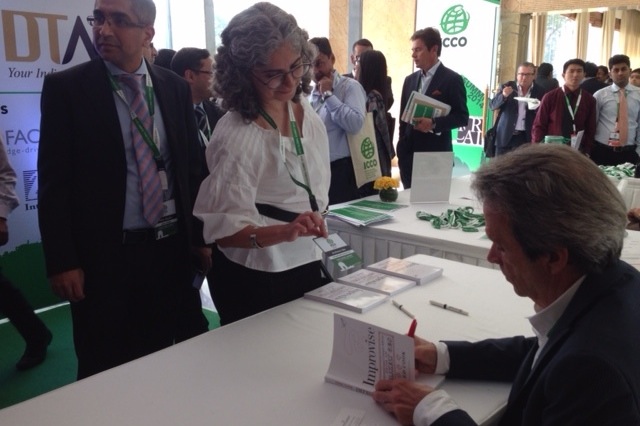 ICCO delegates in New Delhi lining up to get their hands on Fred Cook's autobiographical book, 'Improvise: Unconventional career advice from an unlikely CEO'

"The first thing we look for (in a partner) is the culture and whether they have the same set of values," he said. The symbolism of his statement could scarcely be missed. Cook was after all speaking to your editor in India where dating before marriage is still not as common as the rest of the world but where compatibility of cultural values remain essential considerations before parents agree to a match.

He has put growth at the centre of Golin’s strategy in Asia, which currently accounts for only 15 percent of agency’s revenues. He hopes to double that in the "near future". By having taken the decision to acquire Magic Group Cook has made his intention in China clear. But in India, where Golin is in a partnership with LinOpinion – the PR arm of the communications firm Lowe Lintas, an outright acquisition looks unlikely. The ‘ticket’ size of the PR market in India is still small. According to industry veteran and managing director of Adfactors PR Madan Bahal the per capita spend on public relations in India is barely $0.10 (the equivalent in the US is $10) making it a mere $120m industry.  According to his estimate most of the (PR and communications) agencies in India are believed to be working at a fixed retainer of no more than $3000 per month.

"But the growth potential is enormous," says Cook. "If I were younger and wanted to start a PR agency where would I go?" he asks rhetorically. Although bullish about the market in India, Cook remains ambivalent about the firm’s near-term plans for Asia’s second most populous market. He did hint at the possibility of talent hire."There are a lot of smart people in (PR and communications) business in India," he told PRWeek. "They may not yet be used to doing big campaigns (by global standards) but the work I see coming out is first rate."

Although Cook did not illustrate that claim with an example he said the ability of Indian firms to "localise content" was a big competitive advantage. "I do not see that capability in the US or China," he told PRWeek.