It’s funny what we choose to worry about and what we don’t. Forty thousand people have died in London alone over the past ten years as a result of air pollution while the number dead in the West as a result of terrorism is a few score. So it was a bit galling to hear Barack Obama belatedly declare at the UN summit last month that the environment is now as urgent an issue as terrorism.

More encouraging were the words of the newly appointed UN Messenger for Peace Leonardo Di-Caprio, who called on world leaders to end what he called "the free ride" industrial polluters have been given in the name of a free market economy.

While there has been disappointment at the level of governmental engagement, leaders of corporations queued up to express their concern.

There has been what The Guardian called "a sea change" in the attitudes of big businesses to climate policy. Apple’s CEO Tim Cook said: "The time for inaction has passed." Kellogg’s announced its commitment to support the livelihoods of 15,000 smallholder growers. And HP vowed to reduce its emissions by 40 per cent by 2020.

Their desperate hope is clearly that it will be possible to cling on to our free market consumer economy as long as we cut down on carbon.

The big news in climate change comms this month was the UN Climate Summit in New York on 23 September. Its aim was to catalyse action by governments and firms to reduce emissions and mobilise political will for a global agreement by next year that limits the world to a less than two-degree Celsius rise in temperature.

While it is too early to say if it succeeded in its primary aims, if our sentiment analysis is correct, events like the UN summit do have unintended benign consequences –particularly on the engagement of ordinary people.

According to data from social media analyst Talkwalker, the summit dramatically increased the level of Twitter conversation about climate change in the UK. References peaked in the run-up to the summit at a level ten times higher than the residual level (see graph), with 55,000 mentions right before the event.

The most used hashtags were linked to alternative events around the summit, such as the People’s Climate March. Surprisingly, although the summit took place in the US, the UK showed a proportionately higher level of interest than the US. 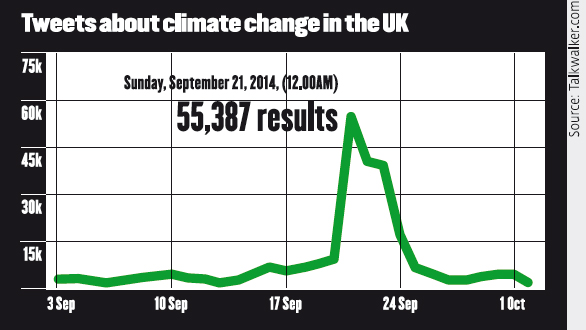