At a glittering awards night on Friday (26 Sep) at the iconic Marina Bay Sands entertainment complex in Singapore Dentsu Y&R Tokyo was awarded the mother of all PR awards at Spikes Asia – the Grand Prix. Its entry Banana Trophy for the best use of social in a PR campaign won the unanimous approval of the jury.

"Very hard to make a 'standard' sponsorship property work for a brand and this did that with humour, wit and marination and put the product right back in the centre frame," explained jury president and Asia Pacific CEO of Edelman David Brain.

"Uniquely, it delivered mainstream product branding as well as personalised branding for participants in the marathon- and not forgetting the significant business impact."

Another jury member Ong Hock Chuan who is a partner at the Indonesia-based PR firm Maverick said: "It (the banana trophy campaign) was creative, it very effectively used owned media to generate earned media and there was follow through."

The winning team, off course, was not shy of showing off their ware. At the awards nite a team of Dentsu Y&R Tokyo strutted up the stage proudly holding the winning "trophy" over their head.

"When I heard the news of winning Grand Prix, I was surprised and cried tears of joy," said Dentsu Y&R Tokyo team leader and planner Yuki Fuse. He thanked his team and wife for all the support she gave him during the difficult and often challenging run up to the project. Fuse told PRWeek his team members had to "overcome many difficulties" in driving this project forward.

The multinational fruit plantation owner and distributor Dole was a sponsor of this year's Tokyo Marathon - Japan’s largest long distance running event in which over 36,000 runners participated. Dole’s banana, which is mostly grown in the Philippines, is extra sweet and is considered a source of nutritious energy for atheletes. The firm wanted to brand its banana as the "ultimate" of all bananas. Enter Dentsu Y&R. It created an "ultimate banana" that proved to be a runaway PR success. It was called the Banana trophy. 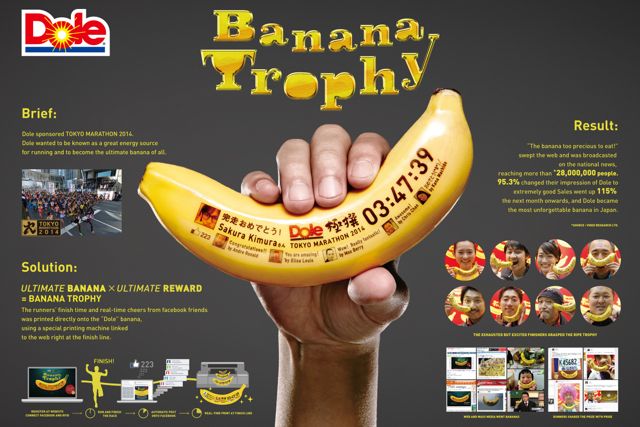 Tokyo marathon participants were first invited to a Banana Trophy "lottery" on Facebook. If they won, all they had to do was run the race, without any smartphone or apps to download. When the runner crossed the finish line, an official Tokyo Marathon RFID device planted on their shoe activated a specially designed web-based signal, which posted "JUST FINISHED TOKYO MARATHON 2014!" message onto the runners’ facebook page. This prompted the runners’ friends to post congratulatory messages on the facebook. All that social media feedback was collected through the web, and automatically transformed into a "Banana Trophy" in real-time at the finish line.

The goal was to create PR valuable news using the Dole banana and the whole experience to getting it.

Creating an experience around something that common as a banana was a challenge to start with. The Dentsu Y&R team did that The "trophy" had the marathoners’ name, finish time and cheers from facebook printed directly onto the Dole banana, by linking the web to a specially constructed printer. That was news by itself. To do it in real-time on the spot was even bigger news, especially for a marathoner who had just finished a grueling 42.195km run.

Buzz like "The banana too precious to eat!" swept the web and was shared 720,000 times. The "Banana Trophy" was broadcasted even on the national news. Media cost was zero, but the total coverage was estimated to be over US$1.1m. The news reached more than 28m. Market survey showed that 95.3 percent of Japanese changed their impression of Dole to "extremely good" and 83.5 percent said they "strongly" considered buying Dole’s banana.

Bananas flew off the shelf soon after the February marathon. Sales went up 115% the next month onwards, and Dole became the most unforgettable banana not only to the runners, but to the whole nation. None of the runners could actually bring themselves to eating their banana "trophy" because it was considered simply "too precious" and "memorable". Indeed, as Cheang put it: "Who would have thought the humble banana was not just for the eating?"