PR pros judging the public relations awards category at the Spikes Asia Festival of Creativity in Singapore have been impressed by the work done by Japanese agencies. Ong Hock Chuan, Partner at the Indonesia-based PR firm Maverick, described it as the "rise of Japan as a creative force in PR".

The rise of Japan

"Japan is the new Australia," said David Brain, President and CEO Asia Pacific, Edelman. "…well in terms of wins and great entries anyway.  There is genuinely world class work being done in Japan and one of the things all the judges noticed was the distinctive use of design and technology in a lot of the Japanese entries." 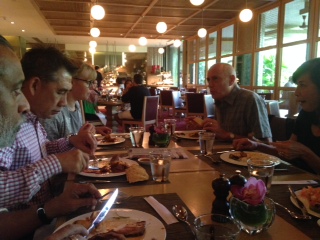 Over a period of two days a jury of eight PR pros reviewed over 247 entries to arrive at a shortlist of 44 finalists of which five are from Japan including "Dokono (which) Pizza" a campaign by Asastsu-DK Tokyo which used a popular local play-on-words concept of Dajare to make a TV spot effective through PR.

The PR jury's votes were based on four criteria: strategy, execution, creativity and originality and documented results.

Each entry received four marks which made up the total vote. Marks were weighted as follows:

Traditional creative powerhouse Australia, however, came out dominating the PR category with 12 entries making it in the finals.

The winners will be announced tomorrow (Fri 26 Sep) at a glittering awards ceremony that will cap a four-day intellectually stimulating event celebrating the best of creativity in Asia.

"Contrary to misperception, the PR industry in Asia has been charging ahead in the past decade," Christina Cheang, Singapore chairman of Weber Shandwick told PRWeek. "I suspect PR practitioners have  largely been too busy branding our  clients that we have neglected to do the same for ourselves. Judging from this year's entries more of us in Asia are waking up to the urgency to market and brand our work a lot more."

"Many of the entries are not only original and creative in their areas but they have the seeding, follow through and media relations elements that characterise best of breed in PR campaigns," said Ong told PRWeek.

A spike in PR entries

"PR people have traditionally not bothered much with dressing up their work unlike their advertising brethren. The spike in submissions can mean that PR people are having a shift in mindset here or that many advertising agencies, in this age of media convergence, are looking at earned media more seriously and therefore submitting their works under the PR category…or perhaps a bit of both," said Ong.

"The fact is, PR thinking is the future of advertising and so, whilst many PR firms are entering more and better campaigns, ad agencies and creative agencies are also using PR techniques and approaches in their work more," said Brain.

India also did well this year with five entries making it to the finals. Neighbours Pakistan and Sri Lanka made a remarkable debut this year at Spikes. The hugely popular PR campaign against drone strikes by BBDO Lahore cut it to the final list in the experiential as well as lobbying sub-category.

But South East Asia was a big disappointment. "Very poor showing by Southeast Asia," Brain told PRWeek. "Usually, Thailand, Vietnam and Philippines are hot beds of creative PR work but not this year".

Spikes Asia is a collaboration between Lions Festivals and Haymarket. The Festival and Awards provide the region’s creative communications industry with a platform to network and exchange ideas, bringing together the finest creative thinkers from around the world.