Watch the video below.

Artefacts from current and previous campaigns litter the space and each one has a story, as if inspiring the current crop of creatives to match or better what has come before.

"That was the pod we used to occupy a rock in the North Sea," one activist tells me. "These are the boats we used to blockade the Trident nuclear submarine base at Faslane," says another.

Life-saving gear, mattresses so that activists can get a good night’s sleep before an early start and survival kit of every kind lie all over the warehouse, and in quantity.

It speaks of the serious, sustained and potentially dangerous actions Greenpeace activists have tackled in the past and will undertake again. You can imagine a ‘quartermaster-type’ figure handing out kit to committed activists as they stream out of the double doors.

I am here at the invitation of Greenpeace as it develops ideas for the next stage of a campaign to put pressure on Lego to end a partnership with Shell that has already seen 16 million Shell-branded Lego toys sold in petrol stations.

Greenpeace is furious at what it believes is Shell’s attempt to use the partnership to cloak its activities in the positive image of a brand synonymous with children and play. The campaign opened this summer, with Greenpeace adding mini-figure protesters to models at Legoland Windsor.

Greenpeace followed up with a take on The Lego Movie song 'Everything is Awesome' that saw happy toy characters drowned by a rising tide of oil. Greenpeace attempted to deliver a petition of 115,000 signatures to Lego HQ in Slough, accompanied by campaigners and children dressed as Lego people, but Lego’s response was to lock its doors and issue a statement that the issue was between Greenpeace and Shell. 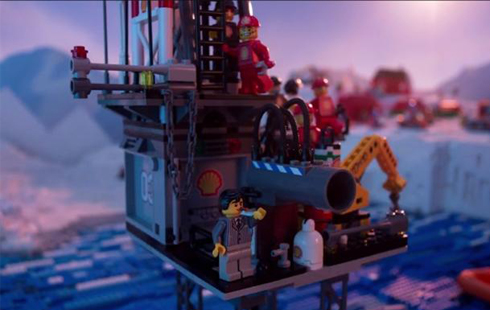 Our first task is a team-building exercise in which half of us build a giant walrus from over-sized Lego bricks – constructed especially for the recent petition – while the other team builds a giant polar bear.

We’re not told how long the kids took to do this task during July’s protest, but the clear implication is that it was quicker than us. I find myself feeling sorry for Lego, looking at the array and diversity of forces ranged against it. These are not muesli-knitting, sandal-wearing hippies, but serious and committed people from a wide range of disciplines, including advertising, graphics and direct-action specialists.

Following a background briefing, people are split into groups and given scope to come up with any ideas, no matter how outlandish, that loosely fit the brief: "How can we cheekily hijack Lego’s and Shell’s co-promotion to make it impossible for Lego to continue the deal?"

There is a positive atmosphere and the guiding principle is "Yes, and..." as a theme for developing ideas. Nothing is shot down, only added to and it’s exciting to observe the collective intelligence of the ‘hive mind’ in action.

The discussion over tactics centres on disrupting the Lego brand and making the connection between it and Shell clear in order to wreak maximum reputational damage on Lego and force it to rethink the partnership. Ideas include infiltrating Lego’s trade shows and embarrassing the company in front of its toy-maker peers with stunts such as getting children to return their Lego to a suited executive.

Also discussed is staging a fake car crash using Lego cars outside one of its events or infiltrating an event and then hijacking the audio visual system to put out Greenpeace messages.

The inclusion of children in a diverse and wide-ranging campaign is mentioned again and again. It’s hard for a burly security guard to eject children forcibly from a room without suffering some seriously negative PR but children are at the forefront of the campaigner’s minds for other reasons too.

Greenpeace believes it is an insidious tactic on Shell’s part to get branded toys inside children’s bedrooms – kids who will, one day, be voters and workers themselves. It thinks Shell is trying to embed its brand into their early consciousness, using Lego’s image to make it appear synonymous with family values.

Greenpeace wants to make it clear to other companies that there is a reputational cost involved in partnering with Shell and it wants to escalate the campaign now because Shell could begin drilling in the Arctic as early as next year.

If Greenpeace can make the connection in the minds of consumers between Lego and Arctic drilling, it is a fairly simple communication to understand: people like one and instinctively dislike the other.

The organisation is trying to highlight the natural disconnect between the brand values of both companies.

The first stage of the session is over and there are more than 100 ideas on offer. A whittling-down process begins and the participants are asked to mark a dot on the best ideas from all three teams.

The group is asked to match the ideas that remain against the following criteria: embarrassing, escalating, consumer-focused and clarifying the Lego-Shell deal. The editing process leaves just six ideas on the table that meet all the criteria and the final stage is to develop them into workable actions and give them a name.

Among those to gain traction is the 'Lego Doorstep Challenge', which involves volunteers turning up at every one of the toy-maker’s shops worldwide and engaging with consumers about Lego’s partnership until the company relents.

Such an idea would require a small army to put into action but one gets the impression of exactly such an army of volunteers, in the UK and abroad, waiting in the wings.

Another idea is the ominous-sounding 'Black Bricks', which would see parts from Lego sets replaced with black bricks and consumers encouraged to visit the Greenpeace website to find out more about the partnership. How this would be done is anybody’s guess but it will fall to others to make it a reality.

As the session comes to an end, although it’s hard to see how the primary aim of going after Shell is served, one can see how Greenpeace’s anti-drilling message could be propagated further than its core supporters to a wider public by involving Lego in the argument, whether the toy company is a willing participant or not.

The Greenpeace campaign talk to PRWeek: