Kroger might be the fifth-largest retailer in the world, employing 375,000 people in its $98 billion network of stores, but analysts say it has been slow to embrace e-commerce. This could be set to change with the July acquisition of online vitamin and health products site Vitacost.com.

The supermarket giant explained the $280 million acquisition as follows: "[It] brings to Kroger a substantial platform that includes technology and ship-to-home fulfillment centers to serve customers in all 50 states."

It’s a move that "excites" Lynn Marmer, Kroger’s group VP, corporate affairs, who adds, "it represents a new market for us."

The deal – which the company says puts it years ahead of where it otherwise would be with e-commerce – will close in Q3. Acquisitions have long played a significant role in the growth of Kroger’s retail footprint. In 1998, the company became the largest supermarket chain in the US after its purchase of Fred Meyer. More recently, in 2013, it added Harris Teeter supermarkets, an upscale chain with 212 stores, mostly in the Southeast.

"We do all the things everyone does to get ready for an acquisition, which includes engaging the other company in communications, which can sometimes be sensitive," says Marmer.

"But our philosophy has been that, no matter the size of the acquisition, the other company is bringing things that will make us better." "It is corporate humility that is very genuine," she explains.

She says the platform offers a visual way to showcase food, and also targets its key demo, women aged 30 to 50.

In June, the retailer hired iStrategyLabs in Washington, DC, as social media AOR for Kroger and 10 other grocery banners across the US – King Soopers, City Market, Dillons, Gerbes, Fry’s, Ralphs, Smith’s, Food4Less, Foods Co., and QFC.

Marmer says iStrategyLabs is "strong in measurement, creative, and edgy."

"That’s why we don’t do this in-house," she adds. "We can do measurement, but we can’t be edgy. Know thyself is something that has been important to our success."

Kroger’s model is to offer several store formats within a single market, but the banners are unified by the chain’s CSR activities in every facet from sustainability and diversity to charitable giving.

Among its many accolades is that, in 2011, Forbes singled out Kroger as the most generous company in America.

It has been a thoughtful strategy shepherded by Marmer, who joined Kroger in 1997 as an attorney. A former partner of law firm Dinsmore & Shohl, she was thrilled to be on the client side after 12 years moving from client to client and issue to issue "as a parachute artist."

But after just six months in legal, the VP of corporate affairs suddenly quit. "So, I raised my hand," Marmer says.

She took the top communications job and in doing so became Kroger’s first female corporate officer. One of her first tasks: elevating the importance of internal comms.

"Kroger was a 110-year-old company when I joined and it had no internal relations department. I was shocked by that," she recalls. "But we’re pretty decentralized with 18 operating divisions. The philosophy was to let the individual divisions and the individual store managers handle PR."

Union challenges
But Kroger stores are highly unionized and each year, at least one of its roughly 300 labor contracts comes up for negotiation, and Kroger often found itself being "out-communicated" by the union. They had the "staff and people in place," Marmer adds.

Following a four-and-a-half month California supermarket strike in 2003-2004 – which temporarily closed Kroger’s Ralphs chain – the company hired a labor communications person at its head office and there are now public affairs professionals with labor communications know-how in all 17 of its geographic regions.

"It became imperative that we organize this type of comms team," Marmer says.

The teams used to report to her, but now report to HR, which allows Marmer to focus more on CSR, sustainability, and charitable-giving efforts. She has led an award-winning cause-marketing program for breast cancer that distributes $3 million annually to local organizations; a program that partnered with suppliers, customers, and associates to raise more than $3 million for the USO; and developed a fresh food rescue program that has helped double donations to Feeding America food banks. 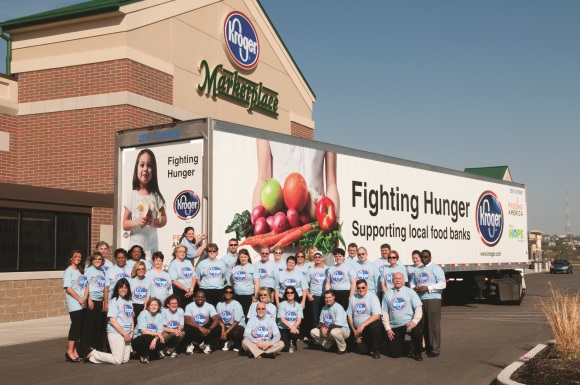 Of the latter effort, Rodney McMullen, Kroger’s CEO, credits her for "identifying the company division that was doing food donations well, aligning Kroger’s other operating divisions with it, and sharing the program with other retailers."

"She saw that our industry had the opportunity to make the world a better place," adds McMullen.

All of Kroger’s CSR initiatives have been customer led.

"Your best teacher is your customer," Marmer says. "We surveyed them numerous times and it always came back that they wanted to help feed the hungry. Breast cancer was also a concern."

"But they’re also involved in neighborhoods, schools, and synagogues," she adds.

As a result, Kroger created a $44 million sales-based customer-driven rewards program, which enables shoppers to donate a portion of their annual spend at Kroger stores to local organizations of their choice. Community Rewards consolidated various iterations of the program at different banners starting around 2010.

More than just a feel-good story, Marmer says the program is a key sales driver.

"Measurement has always been challenging in CSR, but with this program we can see its impact," she says. "You have to register your charity with the loyalty card, so we can track the sales. Those shoppers spend more with us and visit more often."

Community organizations, in turn, have become great ambassadors of the effort.

"The best communications materials are the ones from companies telling their members how it works," she adds. "It is also authentic to our brand, very grassroots. While we do support national organizations, we are a brand of local grocers."

Lynn Marmer is a devoted member of a church choir, and, as she tells it, "this is not a casual on-Sunday kind of thing."

Thanks to its location near Cincinnati’s College-Conservatory of Music, her church attracts talented young singers who have come to the school from across the country.

"We get coral scholars," she says. "It inspires you to be the best that you can. It’s a lot of fun."

Singing is also a great escape from her busy executive schedule.

"I can’t think of anything related to work when I am trying to master some music," she says. "Some people go golfing or skiing, but singing takes the same concentration for me."

"It is something I do as much for myself as anyone else."

David Dillon, Kroger CEO from 2003 to 2013 and now chairman, says Marmer led the company "in the development of our plans around our communities, which led to our adoption of innovative programs such as Community Rewards."

Sensitive recall issues
A recall is one of the toughest communications challenges for food retailers. For many, the recall comes from a supplier – such as Wawona Packing, which this summer recalled potentially compromised fruit from stores, including Kroger. But Kroger is a unique grocer because it is also a food manufacturer with 37 plants. The importance of being ready for a recall hit hard in 2010, when more than 68,000 bags of pet food manufactured in one of its plants were contaminated with aflatoxin.

"We had been through plenty of recalls – they are just part of the food business – but we were not as prepared as we are today as regards how important people’s pets are to them," she adds. "When their pets started feeling ill, it became one of the most emotional recalls we have ever done."

During the recall, Kroger did extensive customer outreach, including by phone and at registers, as well as in-person Q&A sessions. It also paid for customers to have their dogs checked by a veterinarian.

Although "the brand did suffer in sales" in the short term, the experience emphasized "that you have to handle your customers with empathy and concern," says Marmer.

There were also internal lessons. Crises bring together different cooks in the corporate kitchen – including the CFO and in-house and outside counsel – and Marmer realized a part of her role was to ensure everyone was heard. As a former lawyer she also appreciates the role counsel plays in mitigating risk, but notes it can’t come at the cost of demonstrating compassion.

"If you are not careful, you can end up with a response that has no emotional core," adds Marmer. "You have to be the one who is still championing your brand as being unique, caring, local, and authentic."

When Marmer joined Kroger, she never imagined a rewarding career outside law.

"I had to draw on my personal strengths – and some great mentors – because I did not grow up in PR," she says.

That included calling upon her early career as a public school teacher.

"It demands you organize and simplify information; those are skills that are really applicable in a corporate setting when trying to explain complex issues," she adds.

Now she is helping other women forge careers.

"It is progress in a business where 80% of customers are women," Marmer says.