"We wanted to promote the tournament to US audiences and drive attendance and tourism," says Julieta Hernandez, commercial director of the Los Cabos Tourism Board.

"This tournament is a premiere event on the Association of Surfing Professionals (ASP) circuit and the largest surfing event in Mexico," adds Patricia Fahie, EVP at the agency. "It was a great opportunity to promote the destination and capitalize on the fact that you can surf there year-round." 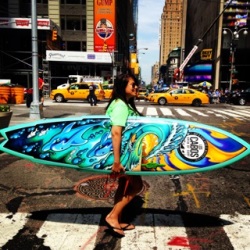 Strategy
CIIC commissioned Brophy to paint the Los Cabos-inspired commemorative surfboard. Street teams took it to various locations in San Diego, LA, and New York City before it was awarded to the women’s division tournament winner.

"Our approach to promoting the event was to tap into the larger, more creative nature of the surfing lifestyle and culture," Fahie notes. "We took a real visual approach with the board, which became a magnet to draw attention to the event."

Tactics
CIIC worked with the tourism board’s digital agency, Clicker360 in Mexico City, to document the creation of the board in photos and short videos that were promoted on Facebook, Twitter, and Instagram.

Surfing influencers Chris Cote and Anastasia Ashley posted pictures of themselves with the board on Instagram. They also filmed a series of YouTube videos about Los Cabos.

The street teams distributed printed materials and invited people to take a selfie with the board and post it on Instagram, Facebook, or Twitter with the hashtag #CaboSurfSelfie. Those with public profiles were entered to win a trip to Los Cabos. 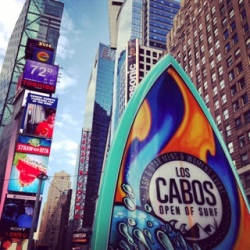 In New York the team took the surfboard to high-traffic areas such as Central Park, the New York Public Library, and Radio City Music Hall between May 26 and June 4. The street team also stood in the crowd outside ABC, NBC, and CBS studios during filming of the national morning shows.

Given the traction the surfboard got in California and New York, Mexico City stops were added June 11 to 17.

A video recap of people taking selfies with the surfboard was posted to the tourism board’s Facebook page and its website.

National traditional media outlets and blogs covering surfing and travel were pitched throughout the campaign. Local broadcast outlets were pitched in California and New York.

The contest drew more than 200 entries, which Hernandez says was in line with expectations given that only people with public profiles were eligible.

Two earned stories ran – segments on WABC-TV in California and on Unvision's Despierta San Diego. The board also appeared several times in crowd shots on Good Morning America on May 27.

Future
The team is planning a campaign for next year’s tournament and promoting other events to US audiences sponsored by Los Cabos Tourism Board, including the Los Cabos International Film Festival November 12 to 16.