Consumer brands have long made mothers and kids the focus of their back-to-school campaigns. Yet as chronic underfunding plagues many school systems, some marketers are shifting their strategies towards supporting and speaking to teachers.

By now, most parents are familiar with the back-to-school list, which schools and school districts hand out before the start of each academic year. The checklist consists of learning materials such as the rulers and pencils that children should bring with them to class.

For the past two years, Kimberly-Clark’s Kleenex tissue brand has targeted school administrators and teachers in an effort to get on those lists. To do so, it has conducted an influencer campaign, including a CSR-driven contest, with Kleenex’s PR AOR, Ketchum.

"We used to be more laser-focused on the parents," acknowledges Amanda Frederick, senior associate brand manager for Kleenex. For instance, the tissue partnered with Nickelodeon star Ariana Grande on its "Shield Sneeze and Swish" campaign, which included a song-and-dance routine that parents could use to teach their kids about keeping their hands clean using Kleenex.

"But last year, we started to make a shift towards targeting school administrators," recalls Frederick.

To do so, Kleenex attended the annual conference and symposium of the National School Boards Association. Using color-tinted water, it held a demo showing how Kleenex tissues block wetness from getting onto hands.

"We had teachers and administrations participate in live demos," Frederick says about the event, which is usually held in March or April and attracts more than 5,000 policymakers, members of school boards, and other education leaders. "Our message is the same as it has been in the past – clean hands help prevent the spread of colds and flu – but now we’re communicating it directly to schools."

To incentivize schools to add Kleenex to their lists, the brand launched a sweepstakes with TeacherLists.com, an organization that connects parents with their kids’ school-supply and teacher wish lists.

Schools including Kleenex on their 2014-15 supply lists could win one of three $15,000 donations from Kimberly-Clark or a year’s supply of tissues.

The sweepstakes launched on May 2 – too soon for most back-to-school efforts.

"But we needed to get out in front of teachers," explains Frederick. "We had to start early because teachers and administrators spend much of their time in the spring planning and preparing for the next year."

In addition to school administrators, bloggers and social media influencers were also targeted. "They were influencers of not only administrators and teachers but also parent-volunteer groups that help to come up with the list," explains Mike Finn, SVP and Midwest brand practice leader for Ketchum.

Finn says the new approach, which Kleenex plans to continue next year, also complements Kimberly-Clark’s year-round partnership with Box Tops for Education. Through the tie-up, the CPG company has donated more than $13 million to schools to help with the purchase of resources like computers and textbooks.

The brand is also maintaining the Kleenex Xperiments website, which includes videos of students from schools across the country conducting science experiments using the tissues.

The back-to-school season is among the most lucrative for retailers. Total K-to-12 spending is expected to hit $26.5 billion this year, according to the National Retail Federation, while Millennials are expected to spend $913 million of their own money on things they need for class. Meanwhile, 44% of consumers are expected to buy items online, up from 37% last year.

If back-to-college spending is added, the season accounts for nearly $75 billion in consumer spending, far outpacing Mother’s Day ($20 billion) and Valentine’s Day ($17.3 billion), according to the NRF. 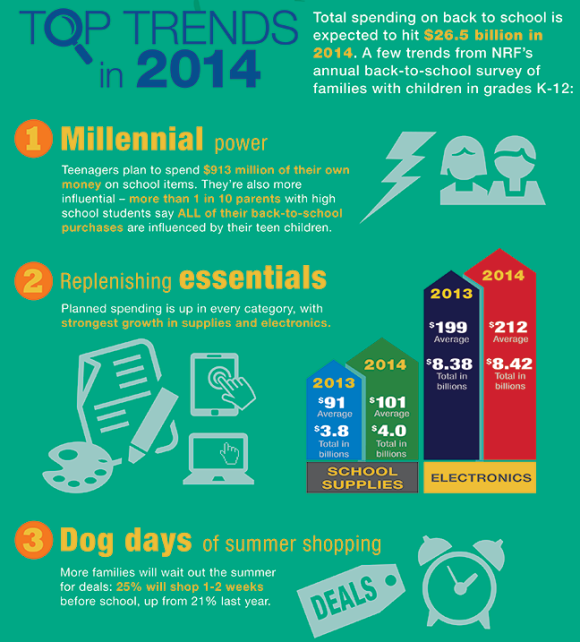 A number of other brands have built their back-to-school outreach activations around CSR initiatives this year in an effort to boost goodwill among stakeholders from parents and kids to the education industry.

Quaker Oats has partnered with AdoptAClassroom.org to support teachers across the country who are reaching into their own pockets to pay for teaching materials or even food for hungry kids. Consumers can lend a hand by purchasing specially marked Quaker products and entering a code at QuakerUpForClassrooms.com.

Jody Menaker, communications senior manager at Quaker Foods North America, tells PRWeek it hopes to "inspire parents and families to join us in supporting the great teachers across the country."

To build awareness, PR and social media are part of a cross-functional campaign that includes digital advertising as well as in-store and on-pack messaging. The PR component includes the use of the Twitter hashtag #QuakerUp, which consumers can use when sharing teacher-appreciation stories.

Zeno Group is providing PR support for the campaign.

In the fashion industry, H&M North America is working with charity KIDS/Fashion Delivers on its back-to-school campaign. From August 21 to September 3, the retailer will give a new item of denim apparel to someone in need through the nonprofit for each piece of denim bought at one of its stores.

It is promoting the partnership through media relations, social media, and digital, as well as in-store backing.

"Back-to-school is an important time in a child’s life, and some children are not fortunate enough to be able to buy new clothes for school," says Marybeth Schmitt, continental communications manager at H&M North America, via email. "Our partnership with KIDS/Fashion Delivers with our Wear Denim, Share Denim campaign provides us the opportunity to reach over 800 charities impacted by poverty."

Agency executives who have worked extensively on back-to-school campaigns also say they have seen a shift towards campaign that speak to multiple stakeholder groups.

"We’ve been seeing a lot of data suggesting dads are surpassing moms in terms of their back-to-school spending," says Liz Beck, head of the consumer practice for North America at Cohn & Wolfe. "A lot of marketers are trying to get their hands on data to find out how much the father is actually driving the purchase or just shopping off a list."

However, she adds that brands aren’t necessarily excluding moms to target dads, but diversifying their campaigns. "In grocery retail, where do a lot of work, there is lots of evidence to suggest that moms are creating the list even as dads are making more of the purchases," she notes.

"It’s something we’re taking into account as we build campaigns," Beck says. "It isn’t about excluding moms but a shift towards a dad-inclusive approach."