The advertisement, which appeared in the Malay-language daily Sinar Harian on Tuesday (7 Aug), came in response to allegations made by Islamists on social media and a call for a boycott this Friday. 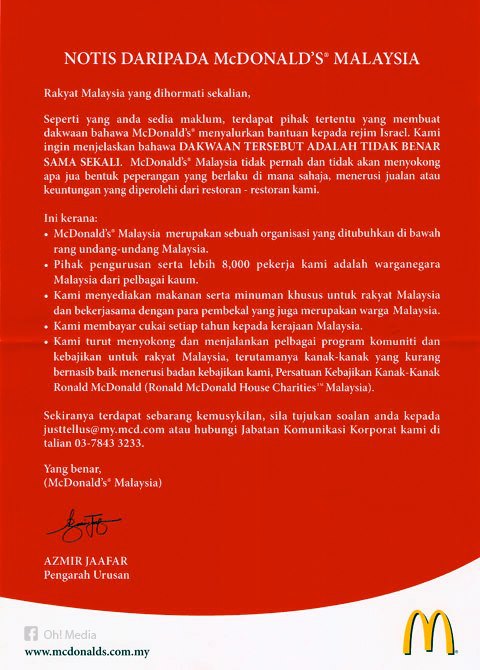 "The real victims of these allegations are friends, workers and families who are the subject of discrimination and our franchisees who are working to make a living," it said.

McDonald’s said a boycott would hurt the livelihood of 12,000 Malaysians and reminded readers that 85 per cent of them were Muslims. The fast-food chain insisted that it is not funding Israeli operations in Gaza or connected with "any political activity, violence or oppression". It also said 67 of its restaurants are owned and operated by 27 local franchisees, nearly half of whom are Malay-Muslims.

Malaysia, which does not recognise Israel, has witnessed a wave of anti-Israeli protests with several Islamic organisations calling for the boycott of products and companies linked to Israel. On Tuesday, violent rallies took place outside two McDonald’s outlets in Kerteh and Dungun.

Social media chatter in Malaysia has been abuzz with claims the firm was led by Jack Greenberg, a Jewish man, and that McDonald’s was channeling financial aid to ‘Zionists’ (a term widely used to describe those who support the ideology behind the creation of the state of Israel). Greenberg, in fact, left the company 10 years ago, and McDonald’s has put out statement on Facebook saying:

"We wish to reiterate that McDonald’s does NOT channel any sales, profits or franchise fees from our restaurants to support ANY political causes or conflicts in any part of the world. There is absolutely no truth in any online allegations suggesting otherwise."

McDonald’s repeated that message in the newspaper advertisement and added that it has contributed more than RM11 million (US$3.4 million) to help more than 20,000 children who are less fortunate for over 24 years. McDonald’s Malaysia has also denied rumours circulating in social media, that it will be handing out free burgers and drinks at selected mosques on Friday. 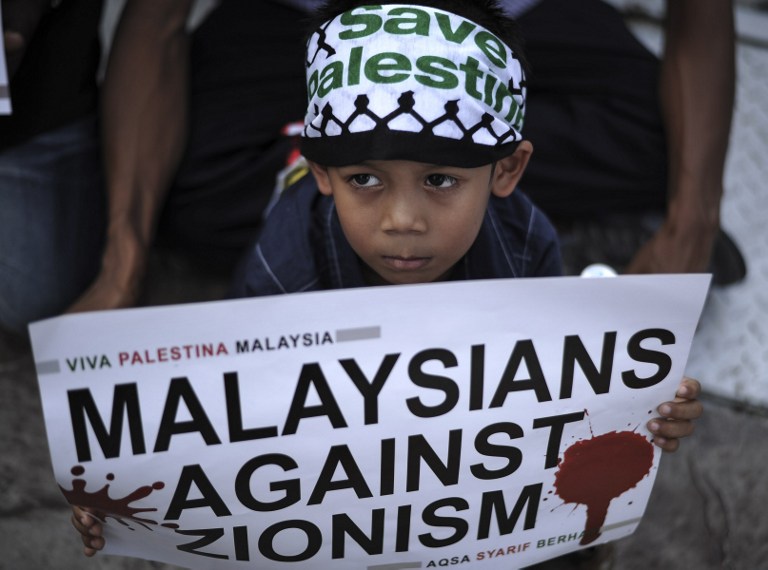 The firm’s decisive response is seen as a textbook example of how a company should combat an explosive crisis. "McDonald's is doing the correct thing by strongly refuting the claims," communications advisor Charlie Pownall told PRWeek. But some believe the chain is in for a long struggle.

"McDonald's decision [to take out the ad] shows that it's taking seriously the concerns of Malaysian consumers, and how eager it is to reassure them," said Adam Murray, corporate communications consultant and founder of BlackLab Marketing Communications. "After all, without these consumers, the company, the brand and their franchisees could be seriously affected. As speculation spreads more rapidly than ever nowadays, it must redouble its efforts to emphasize its position across all media, particularly on social media channels, where the fight to protect it reputation is likely to be most intense."