Born Free Africa is a private sector-led nonprofit that aims to end mother-to-child HIV transmission in Africa by December 31, 2015. Text100 CEO Aedhmar Hynes serves on the organization’s board of directors.

Text100 helped the nonprofit raise broad awareness of the issue through a campaign that revolved around an exclusive collection of women’s and children’s merchandise. The collection was created by 22 top female designers and sold exclusively on Shopbop.com.

"Our goal is to bring private sector acumen, resources, and talent into the campaign to accelerate the goal of ending mother-to-child transmission of HIV by December 31, 2015," says Born Free Africa’s CEO Jennifer McCrea. "It’s also important to reach African, US, and global influencers given the role they can play in working with us to meet our goals. They have a key role to play in terms of advocacy and ensuring momentum continues to increase."

Strategy
"Engaging the fashion community gave us the opportunity to drive mass awareness and develop influence through the designers," Hynes says. "The fashion industry has always been focused on AIDS, so we knew partnering with it would help drive far greater awareness of the issue."

The core message that the elimination of mother-to-child HIV transmission in Africa is possible by the end of 2015 was driven through multiple channels, including traditional media outreach, social media engagement, and a Mother’s Day event in New York.

"All of the collection designers designed clothing for mothers and children," Hynes notes. "The Mother’s Day event was linked to this idea."

Laird+Partners developed http://bornfreeafrica.org (launched in November 2013), the logo, other branding materials, and ads.

Profits from merchandise and event tickets benefitted Born Free, though McCrea stresses that awareness was the primary goal. 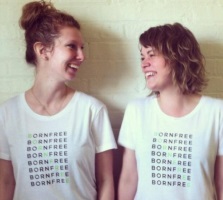 Vogue ran an exclusive in its May issue with photos shot in Africa by Annie Lebowitz.

BornFreeAfrica.org educates audiences about the issue and highlights the collection and designers.

Anyone could sign up on the website to become a social media ambassador. The team then provided them with materials, such as behind-the-scenes photos from the Vogue shoot, to amplify to their followers.

The agency pitched numerous traditional media outlets and blogs in the US and abroad. They included top-tier broadcast, print, and online outlets covering fashion, business, AIDS, and general consumer interest.

High-net worth individuals, celebrities, and media were invited to the May 11 Mother’s Day Family Carnival at Hudson River Park’s Pier 45. It included live music and family-oriented activities.

The hashtag #JoinBornFree was used to promote the campaign. Collection designers and fashion community influencers were encouraged to spread the word to their social media audiences.

Every Friday during the campaign, the team asked people to post photos of themselves wearing pieces from the collection to social media channels using the hashtag  #BornFreeFriday. Images were showcased on BornFreeAfrica.org and on the nonprofit’s Facebook, Twitter, and Instagram pages.

Hynes says many pieces in the collection sold out on Shopbop.

Average daily visits to Bornfreeafrica.org increased 500% between April 1 and May 23.

The campaign garnered 127 earned placements as of May 13 in outlets such as Today, MSNBC, CNN, WWD, USA Today, Los Angeles Times, and The Wall Street Journal.

Future
The team will continue to promote the cause and Born Free Africa’s progress through media relations, social media engagement, and the website.

Key milestones, including data around transmission reductions and World Aids Day on December 14, will be used to engage audiences.