When the communists won the Chinese civil war in 1949 they faced a colossal task. China had a massive population rife with chronic and infectious diseases, with little public medical services to speak of. The Communist party (CCP) responded with a plan to help the people get better access to health care and delivered a comprehensive social healthcare program that brought medical care to over a billion people. This system has helped boost average life expectances from 35 years to 71 years. Though incredibly efficient, the way Chinese state hospitals function has changed little since those reforms decades ago. The CEO of a China-based health care provider has dubbed the country’s public hospitals as "health care factories" that have not kept pace with the explosive growth China’s middle class. In Shanghai patients queue for hours in crowded state hospital lobbies as they wait for medical staff’s attention. China’s medical services are clearly struggling to cope with the country’s runaway urban growth.

In 2009, Philips Healthcare decided to do its part to address this issue, and in doing so scored a phenomenal public relations victory that won them the support of local government and consumers alike. That makes it a good case study on how to use corporate social responsibility (CSR) to build a meaningful brand in China.

CSR has a long history in China, but its drivers are not well understood. For example, we often assume Chinese consumers are generally not interested in CSR. But that is far from the truth. A silent revolution has taken place in China in recent years. A survey conducted by Havas Media last year said that consumer expectations of brands to improve their well being are high. According to the Havas Media 2013 Meaningful Brands study 72 percent of Chinese respondents agreed with the statement: "companies and brands should play a role in improving our quality of life and well- being." 65 percent said they considered the impact of a brand on health and environment when they decide to buy. This was higher than global average of 50 percent – higher, in fact, than any other market surveyed. 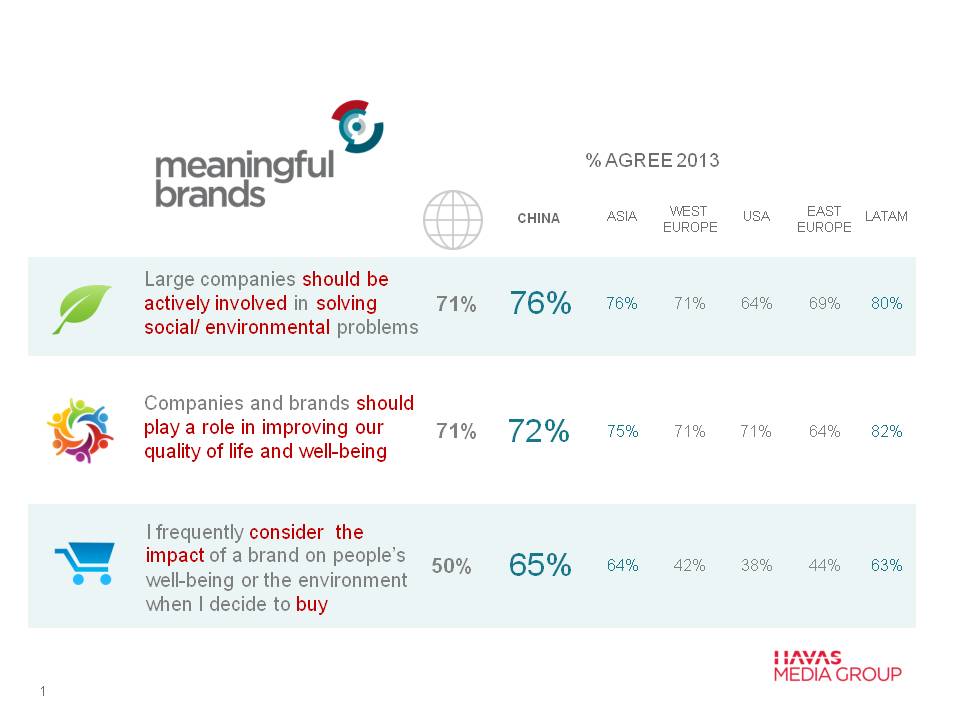 So how does this impact brands? It means that being truly meaningful to Chinese consumers is about finding areas important to them personally and collectively. And it’s with CSR that brands can fulfill one’s collective needs, which only becomes more relevant with a surging middle class. CSR has many facets and can signify different things to different people. I would like to suggest a few general principles and guidelines.

First, align your CSR strategy with national priorities. Philips knew that the government had a huge stake in improving public health. Tethered by its proposition - ‘Sense and Simplicity,’ the brand created a sensible and simple communications platform called Create Time. Working in partnership with the local government Philips installed an electronic terminal in 5 hospitals that allowed patients to track their place in the queue and freed them from the need to standing for hours for their turn without actually missing their appointment. A total of 10 hospitals in Shanghai eventually installed this system. It helped reduce over-crowding and improved patient flow.

Philips Healthcare also rolled out a TV campaign extolling the benefits of visiting community clinics. The objective of the campaign was to help reduce hospital overcrowding and therefore in alignment with government policy. The television commercial demonstrated that consumers could save time and hassle simply by visiting the newly refurbished clinics instead of converging at the large public hospitals for minor ailments. Philips worked with government departments, particularly the Public Health Bureau, to craft the message. It saved 65 percent on airtime advertising costs by having the commercial branded as an official public service announcement.

China’s domestic interests include the promotion of various policies, including job creation and maintaining social stability and harmony. So engaging with the government and policy meaningfully is fundamental. A recent study on CSR said "corporate–state tie is important in the emergence and development of CSR in China, because Chinese governments at various levels still maintains control over most of economic resources.". Businesses must therefore align their CSR initiatives with state priorities if they wish to win stakeholder trust.

Second, focus, and stay on message. CSR strategies must maintain consistency with their brand story. According to Annabell Chartres the former sustainability director of Accenture China the concept of CSR is so broad that companies define it in a way that suits their purposes and objectives. So pick your spots and concentrate on what’s relevant to your brand. Planning and implementing CSR or sustainability initiatives that don’t support your brand message and business objectives will diffuse your message, and can lead even to a negative reaction in some instances. Philips Healthcare made the obvious choice of prioritising China’s health care system, a government priority that’s also a pressing issue for the consumer. So the message is clear. Choose a focus for your CSR and commit fully to it, integrating it into your broader communications plan.

Today, healthcare is Philips’ most profitable division in China. The credit goes to a great PR strategy that matched its CSR initiative to its brand promise. Your CSR program must therefore not be separate from your brand story. Understand what consumers expect. Understand what product or service you delivering. Establish what role you’re going to play in improving their lives. Then decide how you will complement your brand story.

What Philips Healthcare understood was that CSR activities should go beyond matching government priorities to finding resonance with the consumer. It needs to be practical and socially relevant. Digital amplifies this resonance. David Jones in his book, Who Cares Wins says, "If a brand is sufficiently compelling, engaging and motivating to consumers those consumers will become proactive consumers and act as influential advocates for that brand." But consumers and employees alike have always been doing that. "What is new," says Jones, "is that social media has dramatically changed the scale, velocity and impact of these conversations." From influencing a few people in the old world, advocates for your brand can now influence thousands to millions of people through digital.

The vast majority of China’s youth is digital native and is not shy of expressing its concerns about the social and environmental impact of business. Firms can adopt a variety of CSR initiatives that address any of these concerns. Meaningful CSR initiatives could include those that support communities and improve local conditions. Such programmes should be informed by government priorities, and therefore be part of a robust public affairs program. Managing environmental sustainability in the supply chain (particularly that of your Chinese suppliers), for instance, could help mitigate risks down the road should regulations change. But that will require thinking beyond planting trees or making occasional donations.