In April, Walmart, the largest retailer and grocer in the country, inked an exclusive deal to sell Wild Oats products in its stores, offering shoppers the opportunity to buy organic items for about 25% less than leading competitors.

The move, while not shocking since Walmart has long focused on selling items at lower price points, definitely shook up the organic retail market. Some experts believe the shift by big-box retailers to include organic could benefit consumers and the industry as a whole, but only if the focus is on local farms rather than imported products.

Supply and demand
Former financial and food industry analyst Robyn O’Brien, who went on to found the AllergyKids Foundation and wrote the book The Unhealthy Truth, says large companies playing in the organic space, such as Kroger and Walmart, can have a tremendous impact on the issues of supply and demand in the US.

"From 2013 to 2018, we’re supposed to see 14% growth in the sale of organic food," says O’Brien, "and yet that’s less than 1% of US farm lands, so we have to source from countries such as China. That is a huge missed economic opportunity for our country and our farmers."

Organic food sales in the US jumped from about $11 billion in 2004 to $27 billion in 2012, according to the Nutrition Business Journal, and, last year, the USDA valued organic retail sales at $35 billion. The USDA also helped 763 additional producers become organically certified in 2013, an increase of 4.2% from 2012.

But the concern for retailers entering the organic market is the "bottleneck" challenge in the US of supplying the food, which causes prices to go up unless the products are imported, says O’Brien.

The overall shift of American farmers to organic farming techniques won’t happen overnight, explains O’Brien, but she believes it has more potential if big retailers back the effort.

One of the reasons Wild Oats decided to partner with Walmart, McCue says, is to address the "highly fragmented" production chain of organic food, which results in high prices. He says that, by leveraging Walmart’s distribution channel, the brand is able to ramp up production and lower costs between the farm and the consumer.

For example, McCue explains there are at least five steps involved in taking an organic tomato from a farm and turning it into an organic jar of sauce on a store shelf.

"What we’re doing will reduce the cost of those steps and bring the product to consumers at a more affordable price," he says.

The affordable price point is what differentiates Wild Oats from competitors, says McCue.

To connect with fans and potential customers, the brand asks people to interact with its blog site, Our Voice, which features commentary from Wild Oats CEO Tom Casey, as well as organic industry experts and advocates.

O’Brien believes this approach of communicating information "in a sincere and effective way" is the best strategy for organic brands to reach consumers and help inspire change.

Walmart director of corporate communications Danit Marquardt says most of the company’s outreach efforts on organic are through Wild Oats. The Walmart corporate site does, however, have an organic area on it, and the company announced its partnership with Wild Oats on its News & Views website section.

The key for Walmart’s messaging around the Wild Oats deal, which will initially roll out in 2,000 stores nationwide, is that the company is taking away "the premium" associated with organic, explains Marquardt.

"Our internal research found 91% of our shoppers would purchase products from an affordable organic line in our store," she says. She deferred comment on Walmart’s social media or PR strategies related to organic to Wild Oats.

Why local matters
Fred Haberman, cofounder of Urban Organics and CEO of PR agency Haberman, says the idea of local will be the ingredient to success for large retailers in the organic market.

Haberman says small brands have been telling the local story to consumers effectively, and that it’s putting pressure on mainstream companies.

"Consumers are quickly waking up to the fact that local has many benefits, from sustainability to nutrition to better taste, so those retailers that can think about and deliver on that promise are the ones that have the advantage," he explains.

Haberman, like O’Brien, says the conversion of conventional farmland to organic will take a long time because of capacity issues but, regardless how long it takes, he believes it’s better than importing from other countries.

He says when organic food is imported to the US, it could have different regulations than USDA Organic, making the system harder to regulate. Organic food shipped overseas is also less fresh than locally grown food, notes Haberman, and it could be sitting in a box next to non-organic items with pesticide residue.

Marrying local and low price together
Sprouts Farmers Market, one of Whole Foods’ biggest competitors, is combining the low price point strategy with the local approach. 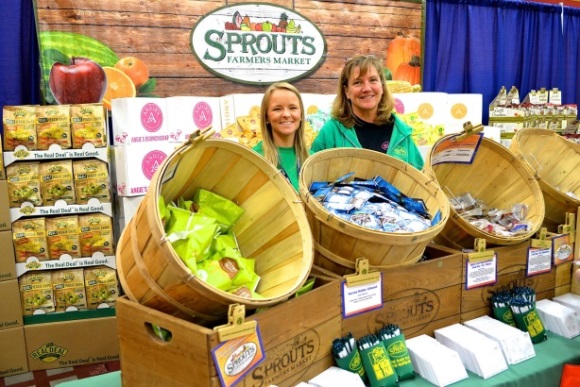 The Phoenix, Arizona-based company, while small with 175 stores at the moment, has been growing at a phenomenal rate, posting a 26% revenue jump in Q1 2014.

According to an analysis by Bloomberg Industries, Sprouts is selling its organic products for about 13% less than its rivals.

Sprouts executives believe the brand can ultimately support 1,200 stores across the US, says Donna Egan, director of corporate communications.

She adds that Sprouts is about "healthier eating at an affordable price" and relies heavily on local media relations to promote the brand to consumers and get new shoppers in stores.

Sprouts holds monthly in-store education workshops and health clinics for consumers and, for those who can’t make it to the store, releases videos on YouTube about its organic products and how to use them, says Egan. The brand also has a nutritionist in-house.

Egan says education is critical because how to use the products is a major barrier for those who are new to a healthy lifestyle.

Facebook and the Sprouts website, which was redesigned earlier this year, are also important for reaching consumers. The brand’s Facebook page now has about 700,000 fans, up more than 180% from this time last year, says Egan.

This month, Sprouts will make its entrance to the Southeast with a store in Atlanta, and Egan says "hopefully the Northeast" will be next for the brand.

Overcoming the local vs. large barrier
Haberman’s Urban Organics farm, which uses aquaponics – a method where fish and plants help each other grow – was founded three years ago to harvest pesticide- and GMO-free produce.

While the farm, based inside an abandoned Minneapolis brewery, is just beginning to harvest its first vegetables, Haberman says the company is already being contacted by large retailers.

The challenge large chains have in approaching small brands is what Haberman calls "a strong community local ethic and value system."

"When Walmart comes courting," he adds, "the first reaction [by local farmers] might be, ‘That’s big corporate America, which has been contributing to what’s wrong with the food system, so why would I start providing food to them when I could provide food to Bob and Tina who own the local grocery store?’"

A way around this obstacle is for large retailers to partner with local farms, and tell that sustainability story to consumers, Haberman explains, especially Millennials who are spending significant percentages of their paychecks on organic foods.