Sadly there were no bell-bottoms in sight among their fellow guests, who included Byrne’s former boss Lord Mandelson and Shandwick alumni such as Simon Lewis, the chief executive of the Association for Financial Markets in Europe.

Chadlington recounted how Shandwick turned down tobacco business worth three times its annual revenue, though Lewis remembered the agency being a haze of cigar smoke in the 1980s and consequently murder on his dry cleaning bills.

Nary a Cafe Crème was seen last night, though S&E suspects Weber’s raffish corporate chief Nick Stravs breaks them out for the big client wins. 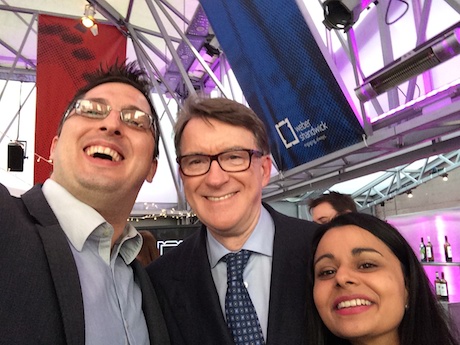 ... kudos to Weber's John Bowen and Nafisa Nathani for being photobombed by the Prince of Darkness.