It’s more than 20 years since Absolutely Fabulous first graced our screens. Since then the PR buffoon has become everyone’s favourite television stereotype. A mixture of ruthlessness, self-centredness, incompetence, entitlement and mendacity has created a string of enduring characters we all love to hate.

But those are fictional portrayals. Surely the man in the street can distinguish between entertainment and reality? Possibly not. If the latest research commissioned by PRWeek from One Poll is anything to go by, the PR industry’s public reputation has a long way to go before the industry can be seen in a positive light. 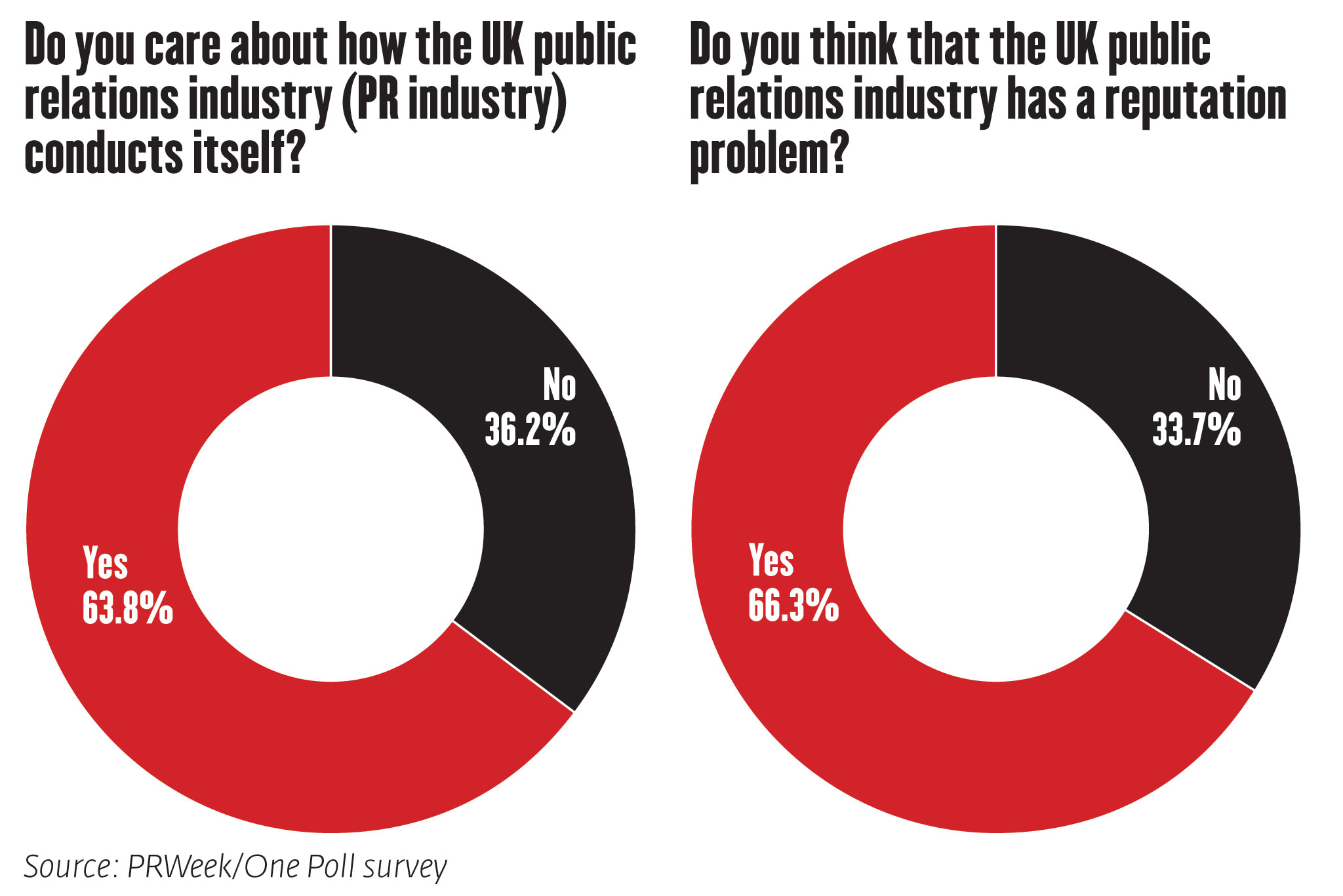 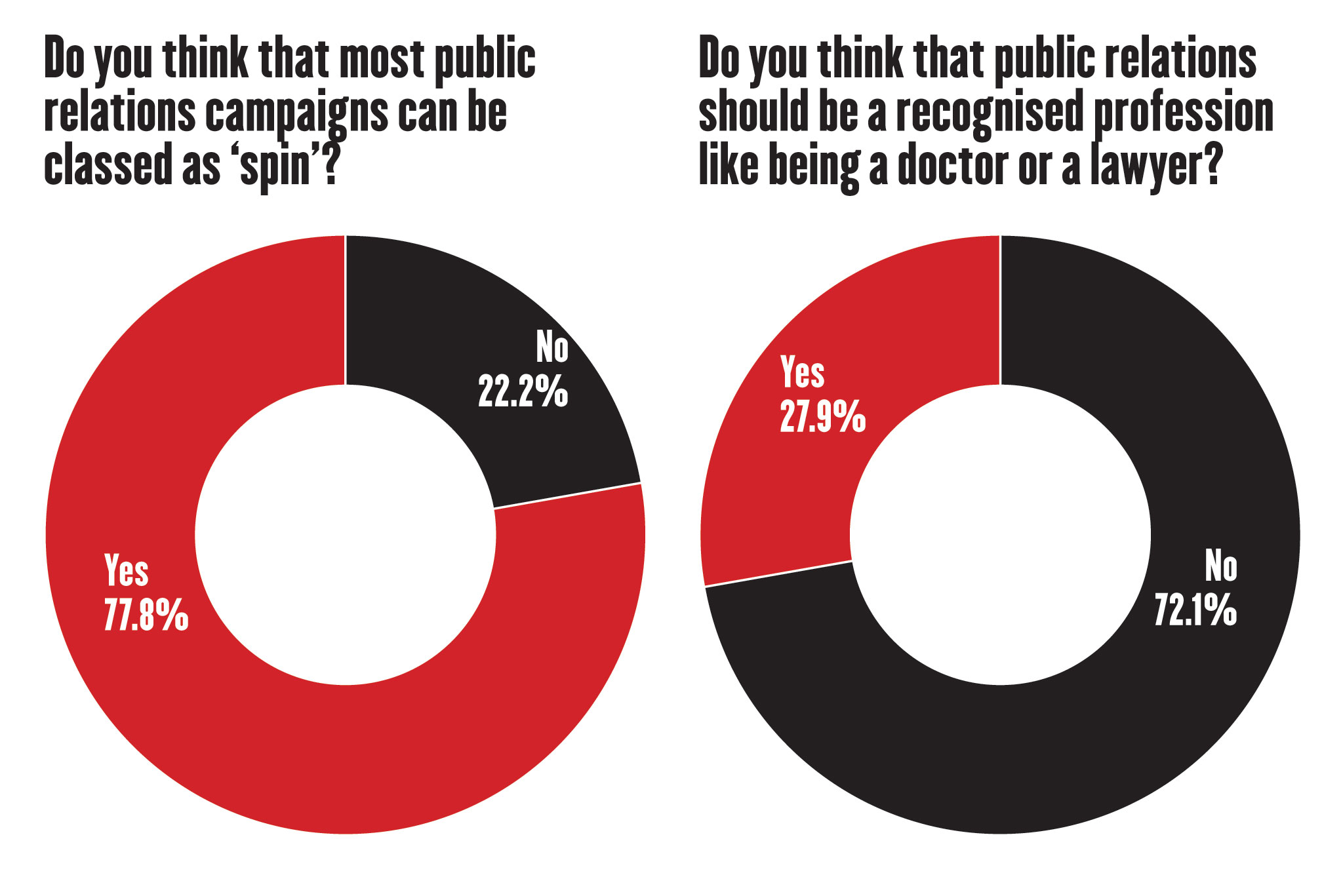 Scott Wilson, UK CEO and managing director EMEA at Cohn & Wolfe, says the PR industry is too apologetic for what it does in a world where most PR firms are rapidly expanding and moving deeper into the marketing services arena.

It’s a legacy issue, he argues, from the days when PR meant media relations – described by one agency head as going no further than writing a press release. "We have a tendency to self-flagellate as an industry in terms of how we define ourselves, how others define us, how we demonstrate our worth and how we measure our worth," Wilson says.

"The phrase ‘PR’ is the problem. With the realities of the client work at the moment, the phrase ‘PR’ compartmentalises us in a way that transforming modern agencies are leaving behind.

"Even the words ‘public relations’ have slightly more gravitas to them, but ‘PR’ is light and frothy and immediately takes you down the road of media relations, and further to publicity and spin." Wilson says the issue is now whether PR should settle with what others tag it as, or demonstrate its worth in order to climb further up the marcoms ladder? This is especially significant in a world when earned media is now part of every creative, media planning and buying meeting.

He does admit that the reputation problem is still rife in PR, but that it is a reflection of an "apologetic past that we do have to address".

Colin Byrne, CEO, UK & Europe at Weber Shandwick, says the PR industry is just trapped in a cyclical reputational self-doubt that has befallen it on several occasions. It is something he does not readily understand, as he says that "PR’s reputation is very high, it’s very self-confident and it is growing at a pace on the back of money that would have traditionally gone to other disciplines".

It is this paradox that confuses him, as he points out: "The problem with the PR industry is that it has cycles of crises of confidence and self-esteem. I believe introspection is good for any industry as we constantly need to be listening and acting and evolving, but obsessive self-doubt is unhealthy."

He says that PR’s reputation, certainly within the marcoms community, may be actually enjoying a renaissance as "marketers question how much they are spending on ads that people are increasingly not watching".

Byrne observes that more executives are focusing on communications as part of their management training and that there has been an explosion in the number of PR courses, along with an increase of people wanting to come into PR from academic backgrounds who would traditionally have gone into law or the City.

This evidence is largely anecdotal, but is a sign that PR is clawing itself back from a reputational funk that many believe started with the political spin that became the norm during the 1990s on the back of New Labour and its "sexing up" of anything it could get its hands on.

"I was a political spin doctor in the late 1980s and early 1990s when spin became a dirty word and tarnished the reputation of an entire industry. The big names in the industry at the time and those written up in power lists were all involved in spin," Byrne points out, although he says that this has largely changed now.

Alison Clarke, CEO of Grayling and chair of the PRCA agrees: "The industry goes through waves of getting its knickers in a twist about people who might be bringing the nature of what we do into disrepute or making the industry look a little light.

"These waves of concerns have always existed and they come and go. I believe the industry has a much higher standing now than before."

Clarke believes the PR industry is "light years" away from where it once was and that the "odd stereotype or the odd mildly amusing piece in the media or on TV" shouldn’t be bothered about. If the industry starts to debate what this all means it indicates "we lack confidence in the standing we do have," she says.

"People get themselves into a lather about these things. That’s probably not a very PC thing to say, but that’s what I believe."

Wilson believes that the further stereotypes go, the further away they are from reality and they become caricature rather than satire. Therefore, the more absurd the portrayal of PR in the media is, the less damaging it is.

"Is our reputation in the eyes of the general public still defined through these slightly historic stereotypes?" he asks. "Whether it’s Absolutely Fabulous or Malcolm Tucker, or even celebrity publicists or ‘event marketers’, for want of better words, it’s a characterisation that I just don’t see in people working across the industry."

The air-kiss and long-lunch culture has faded from view to be replaced by straight business collaboration with clients.

He does, however, add a caveat. "That’s not to say there won’t be a remnant of blonde girls standing next to cars at the Geneva Motor Show or high-profile celebrity spinmeisters who seed into red-top newspapers, but it is such a world away from the reality of my day-to-day life that it doesn’t bother me, but it’s a truth nonetheless."

Mike Love, chairman of Burson-Marsteller UK, takes the Marmite or Millwall, ‘love us or loathe us, it doesn’t stop us getting the job done’ approach. "We tend to be in a category with other lowlifes such as politicians, journalists and estate agents. I’m not aware that image stops us, or them,  getting any work," he says.

On the industry’s image in the wider media, he points out that "entertainment is just that, you shouldn’t take it too seriously", and that Tucker and his cohorts including Ab Fabs’ Edina Monsoon exist only in fiction.

Or do they? Love says: "It would be a problem if a client or potential client thought any of us were like either of those two. Although, come to mention it, I’ve met PR people in real life who resemble both characters – not that I watch TV trash, obviously."

Byrne points to a shift within the industry that may see the balance finally move away from the stereotypes for good: "The people who are admired in our industry are the creatives and the strategists, not just those with the black book of journalist and rock star contacts," he asserts.

But does it matter what the public thinks? The OnePoll/PRWeek research suggests that their opinions are not based on any real knowledge or insight. Only 15 per cent admit to ever having met a PR person.

However, the PR industry advises other industries on their reputation. The idea that anyone in PR could argue that their own industry’s reputation doesn’t matter seems a little odd.

"Of course general sentiment matters, even if it is uninformed," says Andrew Bloch,co-founder and group MD at Frank PR. "It affects everyone who works in PR," he says. "We should be proud of the industry we work in and public opinion affects that."

Although he doesn’t buy the idea that general sentiment will adversely affect PR’s image in the boardroom and among its direct customers, he does think that it could have a depressing effect on share prices .

Lord Chadlington, chief executive of Huntsworth plc, fears that poor reputation can start a downwards spiral in value. "Yes, it matters if for no other reason that you will only attract high quality people to an industry with a good reputation. Lower quality people could affect the standard of the service we offer clients."

He has a point. The PRWeek survey found that two-thirds of those questioned don’t consider PR to be a good career choice. "High quality people now think twice about a career as a politician. The quality of law making has suffered as a result," says Chadlington.

The fact that the industry continues to grow is not necessarily evidence that there is no image problem, he argues. It is possible that the problem is being masked by other forces. "It’s more to with the increasing burden of financial regulation that has boosted demand for our services and the growth of social networking," he says.

Obviously PR clearly does have an image problem. The question is what to do about it? Clearly it needs to manage its reputation better, but the suggestion that the industry should mount some sort of PR campaign receives
little support.

"It’s true that the industry typically does a far better job for its clients than itself. But the idea of the PR industry running a PR campaign for itself is so open to parody as to be a non-starter," says Warwick Smith, managing partner at Insitinctif Partners, formerly College Group.

Far better, he says that the industry should permanently change the way it talks about itself. "We need to be constantly prepared to talk about the very bright people we employ and the benefits we bring to broader society," says Smith.

Others think that a solution is for the industry to ‘professionalise’ itself. "People understand that chartered accountants and chartered engineers, for example, are accountable and adhere to valid professional standards," says Phil Morgan, director of policy and communications at the CIPR.

"People working in public relations can also claim professional status if they validate their skills, experience, qualifications, accountability and engage in continuing professional development in the same way. A key aspect of that is chartered status, he argues. "We aim to make chartered status the norm rather than the exception for public relations because it will build trust and deliver better outcomes for clients, employers and the general public."