SXSW interactive: it’s a heady mixture of inspiration, perspiration, imbibing - and a touch of desperation - as 30,000 folks gather in Austin, TX to meet, debate, hang out, and pursue the zeitgeist of modern communications.

My first visit here has left me feeling as inspired and exhausted as I am at the Cannes Festival of Creativity in the south of France, but in a totally different way. The glasses of rosé and croque monsieur on La Croisette have been replaced by shots of bourbon and the best barbecued food around on Red River Street.

There are a lot more beards and plaid shirts here than on the French Riviera, which reminded me of Brooklyn. But, like Cannes, this is a place where lots of clients are increasingly hanging out, which means the agencies have to be here too. Unlike at Cannes, though, a lot of the firms are working on client activations alongside their thought leadership sessions and networking parties.

I visited Waggener Edstrom’s Connected Car tent, which it set up with Volvo and others of its clients. I went up in a private jet to experience Gogo’s new in-flight text and talk service 10,000 feet above the massed crowds at the Austin Convention Center. I checked out PayPal’s social media center, where the electronic payments firm was attempting to reestablish its cool credentials.

Mondelez’s Oreo brand was in the mix as usual, with its fun 3D printed cookies via Twitter concept. Subway was there, so was GM, and many other big brands. Then there were the marketers and communicators you would bump into walking around the center, or in the streets and bars surrounding it, who were there for meetings and just to soak up the inspirational sessions and networking.

I didn’t bother negotiating the crazy lines for keynote sessions with the likes of Julian Assange and Edward Snowden (via video conference of course), though I did catch US soccer national team coach Jurgen Klinsmann in an enjoyable Q&A with ESPN’s Roger Bennett.

Like everyone else in Austin, I found there were many sessions, parties, and get-togethers I wanted to attend but just couldn’t fit into my schedule. But you have to go with the flow at SXSW and there is no room for regrets. 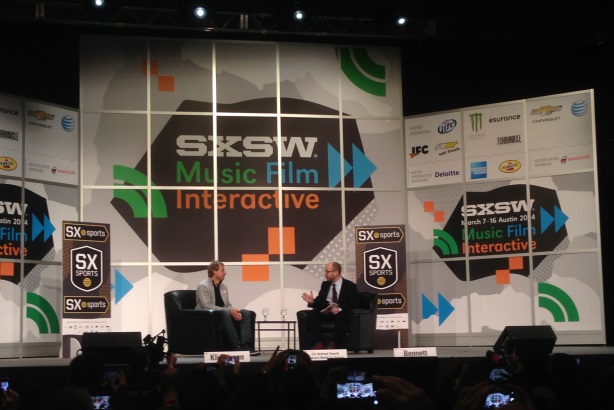 I did attend interesting sessions on native advertising and agencies as makers, which I will write up separately. And, as I was in town, I took the chance to visit Austin-based PR firms such as Hill+Knowlton Strategies and W2O Group.

SXSW stalwarts Foursquare decided not to show this year, so the location-based social network’s legendary CEO Dens was not in town with his normal ubiquitous presence. This absence and the fact that the event has become so big it has outgrown Austin’s infrastructure led some to wonder whether SXSW had jumped the shark.

As I waited in vain in the pouring rain at 1:00am on Saturday night for a cab to take me to my hotel miles out of town, I could certainly see some logic in that argument. But, on balance, I’m going to say it’s still something that has to be experienced by everyone who is interested in being inspired and learning about the cutting edge of just about everything.

As one SXSW veteran said to me, the magic of the event is really all about the people you meet and the interaction and sharing of ideas you experience. When you’re pushing innovation inside a corporation, brand, or agency it can be a frustrating and lonely existence at times. So it’s good to come to a place with thousands of like-minded people who really get it and want to learn from each other and push creativity and innovation.