CoppaFeel was founded by 28-year-old Kris Hallenga, who has incurable cancer that spread from her breast to her spine and is focusing on educating young people about the disease.

The Sun has six million readers, of which 1.7 million are the charity’s target audience of 18- to 35-year-olds.

"CoppaFeel aims to communicate to a younger audience in a way that resonates with them, keeping the message fun and bold. We think Page 3 is perfect for this," said Hallenga.

The partners have called their campaign, which encourages people to sign up for free texts from CoppaFeel to remind them to check their breasts, Check 'em Tuesday. 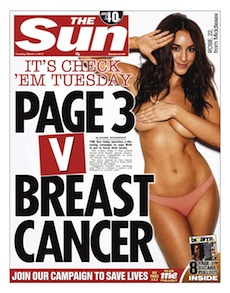 wspaper has given over today's entire front page, bearing an image of Page 3 girl Rosie Jones, as well as an eight-page pullout to the campaign.

The Sun's decision to associate Page 3 with a serious issue follows pressure from a campaign group, No More Page 3, for the newspaper to drop the topless tradition on the basis that it is sexist and outdated, and encourages young boys to view women in a derogatory way.

The campaign's founder Lucy Holmes has praised The Sun's decision to tackle breast cancer, but stressed it would not convince her to stop.

"It would be wrong to wish this campaign anything other than success," she wrote in a blog. "However we know that our stance hasn’t changed. From us, as always, it’s No More Page 3. We’re doing this."

Breakthrough Breast Cancer, one of the key breast cancer charities, has confirmed it was not approached by The Sun about supporting the campaign. In a statement, it claimed the campaign "risks trivialising breast cancer" but was also likely to save lives.

CoppaFeel has released the following infographic explaining how the partnership will help it achieve its goals.