Any of us applying for a British passport will be familiar with the list of trustworthy professions in which an honourable soul can countersign documents.

Lawyers, accountants, teachers, chiropodists, funeral directors and even journalists are deemed of such social standing that committing a falsehood would be inconceivable to them.

This is what the outside world sees as the UK’s true professional callings. And public relations does not make the cut.

So what, then, does that make PR and comms? A trade, perhaps? An endeavour? An art?

Does anyone really care whether PR is a profession or not? It seems from the responses to the CIPR’s industry-wide State of the Profession survey that the answer is a resounding "yes".

In total, 94 per cent of the 2,531 PR operators quizzed said being considered a professional was  important to them, with a huge 72 per cent of those asked saying they felt strongly about the issue. 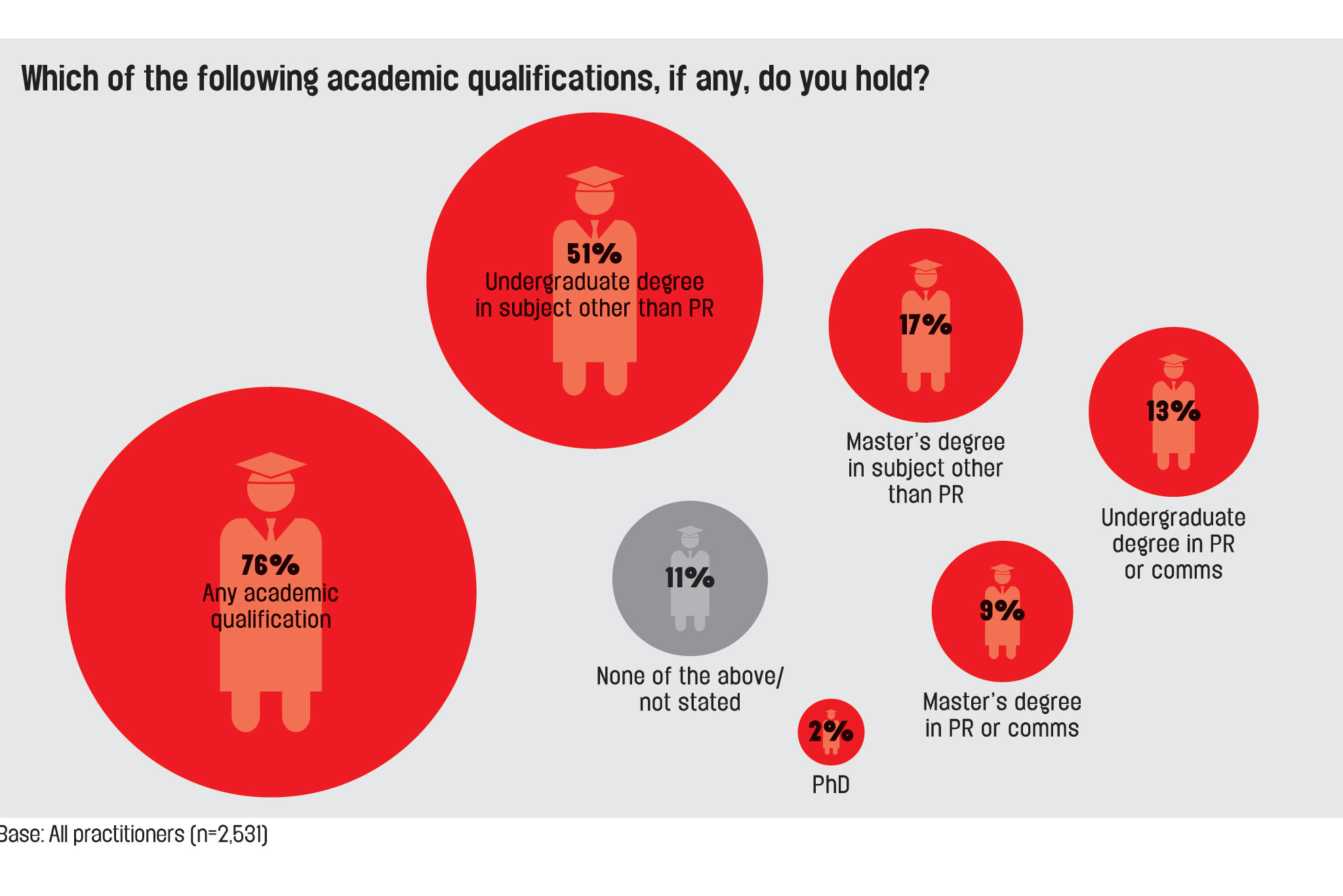 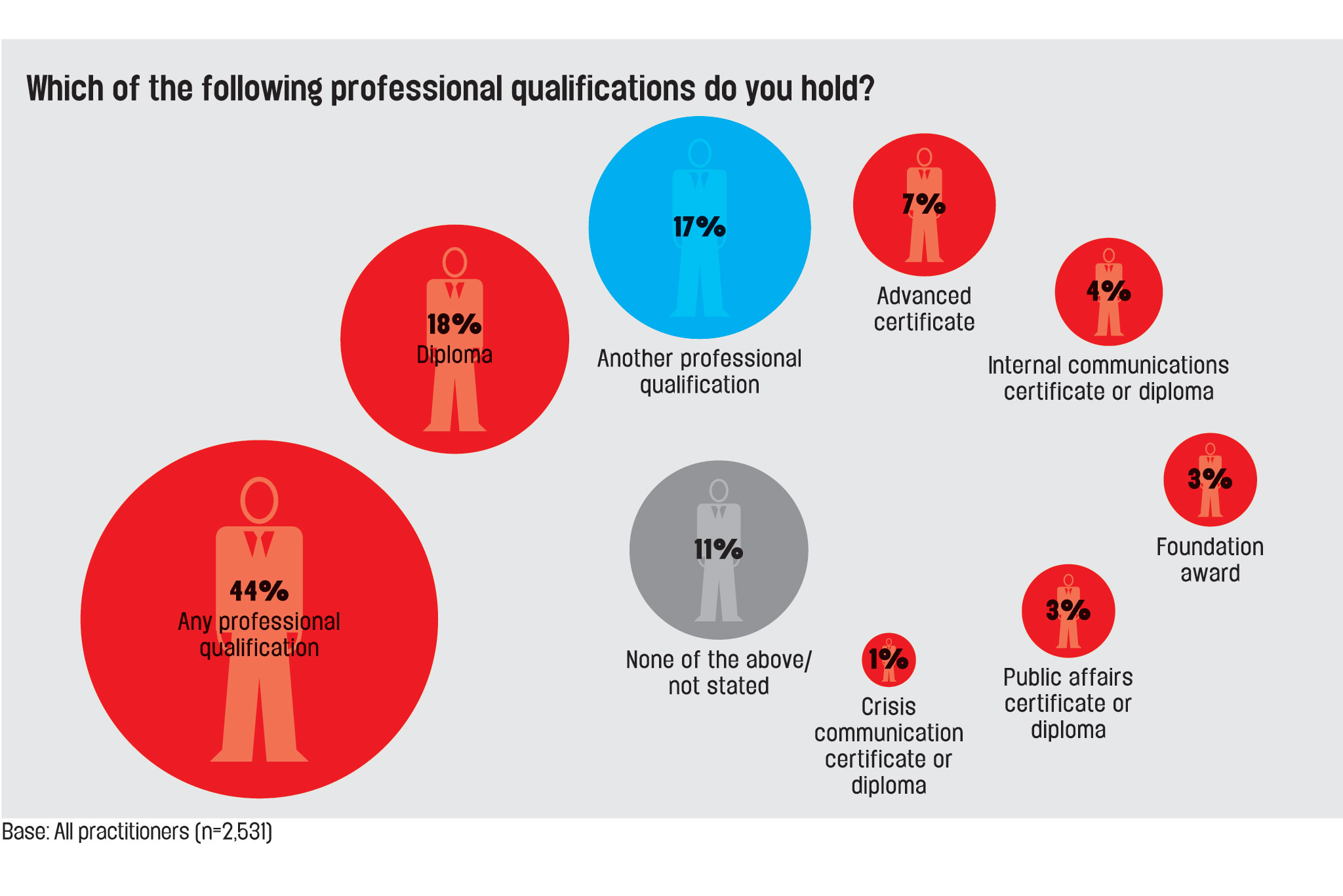 There is little doubt PR has grown up as an industry in recent years – in terms of its influence within boardrooms, the breadth of the industry’s services and reach and the sheer size of the market.

The trouble is that the industry seems less sure what it is actually growing into.

It appears that PR is gripped by a cognitive dissonance – industry participants desperately want to be seen as professionals, but their actions, practices and philosophies show little connection to what typically constitutes professionalism.

Definitions of professionalism vary widely, but generally speaking professions are characterised by specialist formal qualifications that are certified by a recognised body.

In other words, true professions have barriers to entry.

However, what we find in PR are fairly low levels of specialist qualifications, moderate levels of general qualifications and an industry that prioritises experience over training at almost every level.

Fewer than half of respondents to the CIPR’s study (which includes around 30 per cent of non-CIPR members) had any kind of professional qualification, while only around three-quarters had any academic qualification at all.

Such qualifications were generally prioritised above other academic achievements, but can an industry where fewer than half are qualified practitioners truly be a profession?

There would probably be fewer willing entrants to the operating theatre if the odds of getting a qualified surgeon were slightly worse than tossing a coin. Even football managers are required to pass courses before they can run a team these days.

What is more, this lack of the trappings of professionalism is exacerbated by recruitment practices across all levels of the industry.

Similarly, fewer than one in five said their firm  required membership of a professional body when recruiting senior operators, dropping to just five per cent for junior roles. 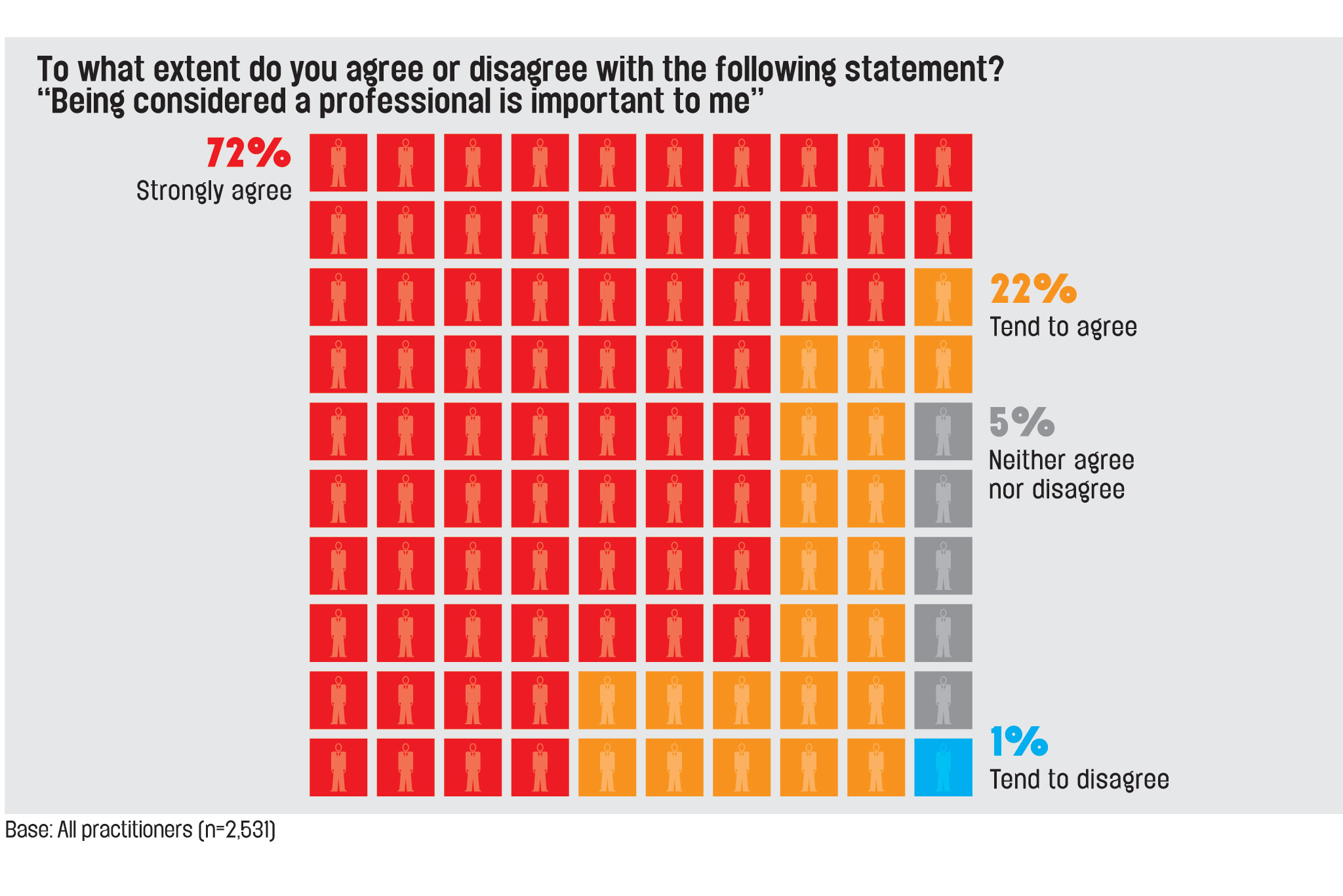 Also potentially of concern is that only 35 per cent of respondents said they saw PR as a job for life. These results need to be treated with some caution, given that some other responses (such as the 18 per cent who wanted to run their own company) do not preclude remaining in the industry. But the proportion committed to PR for the rest of their careers seems lower than you would expect to find in other professional walks of life.

The obvious response to all this may well be "so what?" But if people in the industry want to be considered professionals, they need to act as professionals. It may be that by ‘professional’, they mean to be seen as competent and ethical. In that case, however, recognised industry standards and adh­ering to a widely accepted code of conduct is still a vital step – and a step that many have yet to take.

Additionally, external views of the gravitas of the industry do matter for those who look to offer businesses senior advisory services to sit alongside the other professional services.

If reputation advisers are to sit comfortably alongside those offering management consultancy, tax, legal or risk management services, being viewed as a gifted amateur relying on good instincts and contacts is not going to

There is, though, a flipside to any drive to professionalise the industry. PR cannot be a true profession without erecting barriers to entry, and barriers cannot be erected without potentially impacting efforts to increase the breadth of backgrounds of candidates attracted to the industry. 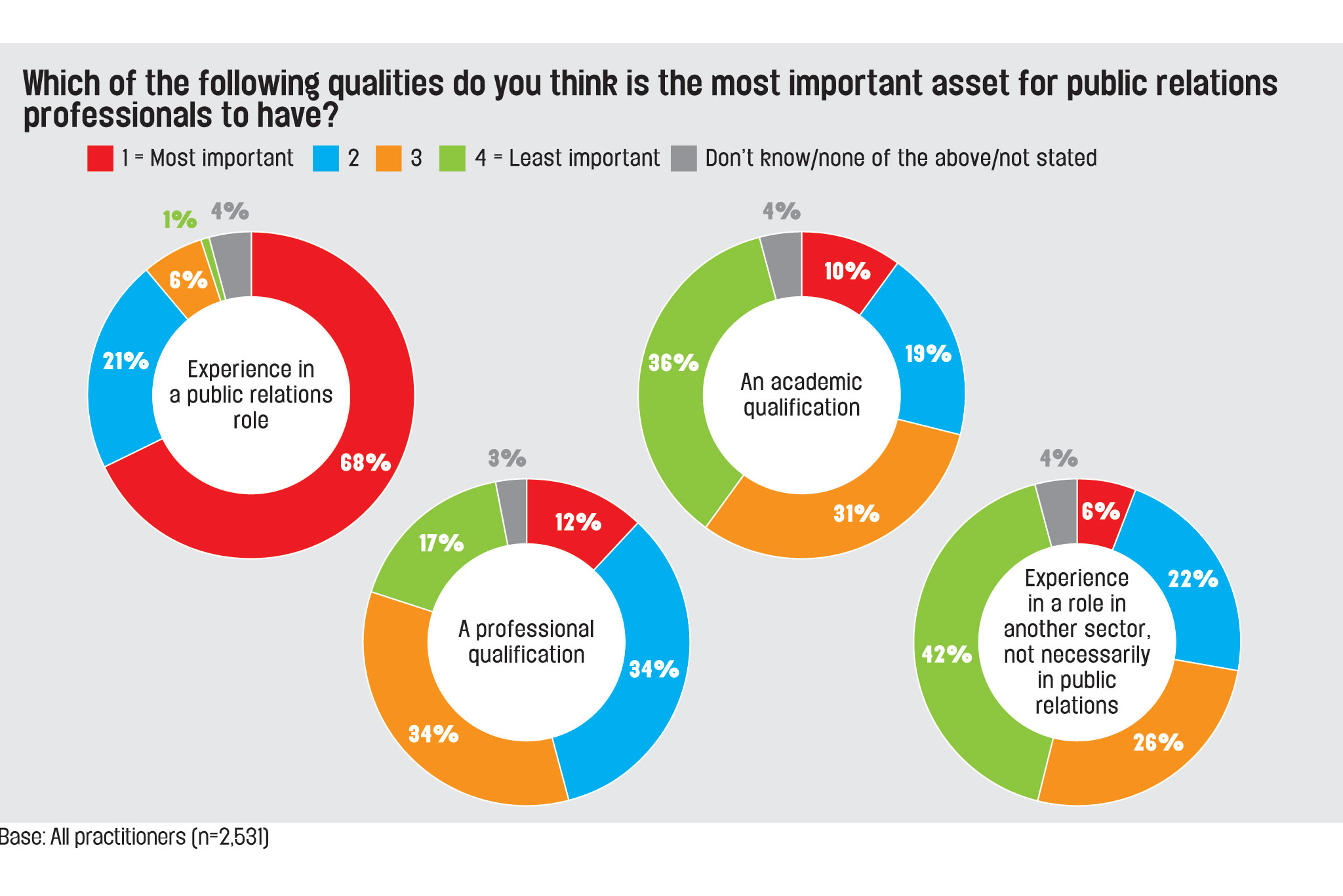 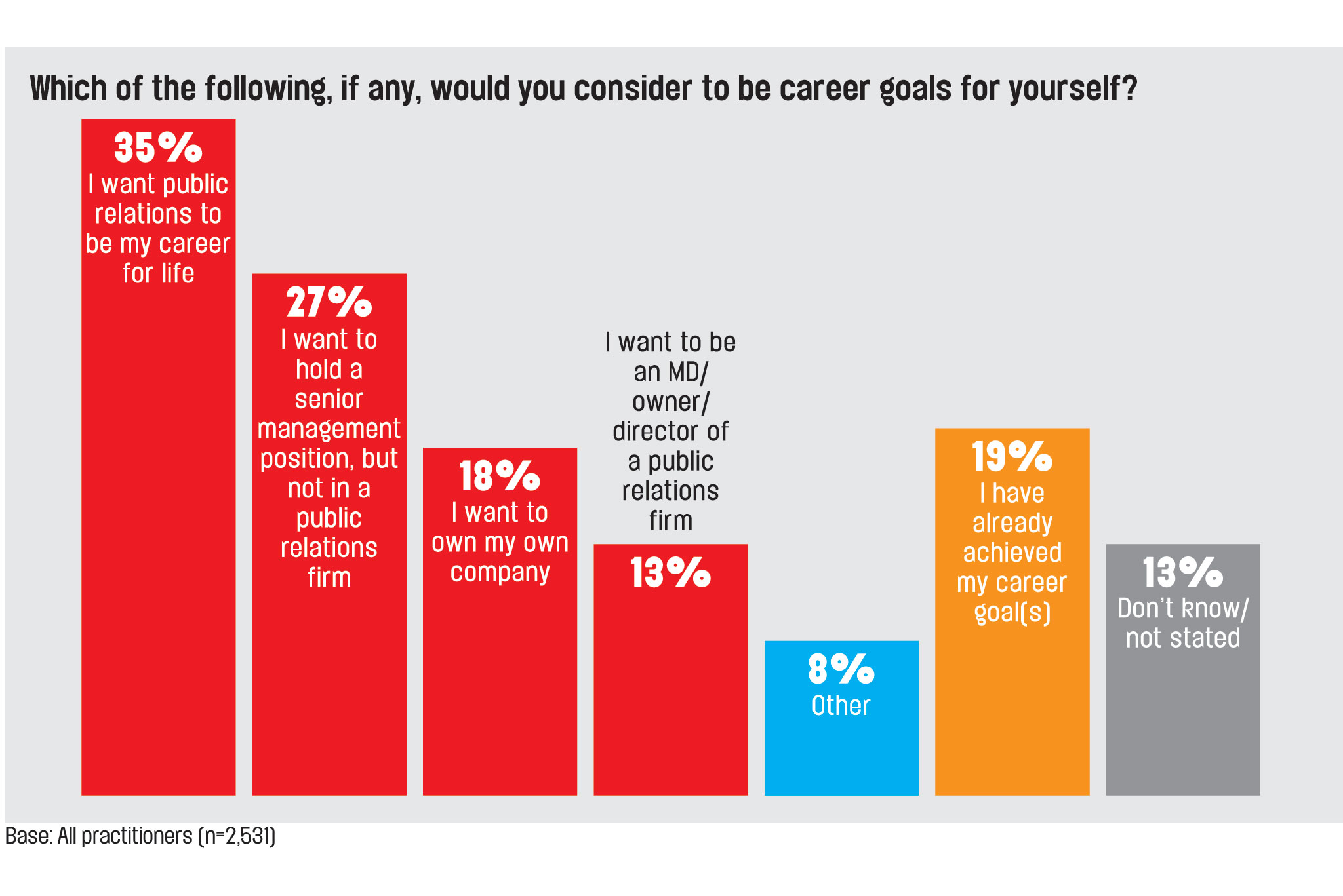 Both the CIPR research and the recent PRCA/PRWeek PR Census found significant under-representation in terms of ethnicity and social diversity. It must be a genuine concern that taking a more regimented view of recruitment and candidates’ capabilities could put off the very people the industry is desperate to attract (incidentally, that only half of the industry felt campaigns could be more successful if teams were ethnically diverse does not bode well for addressing this imbalance).

With creativity becoming one of the great battlegrounds both within the industry and in terms of PR’s standing against the other marketing disciplines, perhaps the more structured world of traditional professions is not what PR should be aping. Many of the industry’s top practitioners recount almost falling into PR because they found they had a particular aptitude for it – very few people ‘fall into’ law or accountancy – and some forcefully argue the PR industry is better for it.

Ultimately, the future of PR’s position in business and society is yet to be written. PR is rising as a discipline, while external views of the industry often remain less than flattering. The direction of the industry is in the hands of those who practise it. Those in senior roles have the opportunity to mandate certain standards, and those newer to the industry can ensure they are relentlessly focused on professional improvement. If PR wants to be taken seriously, it needs to start taking itself seriously. 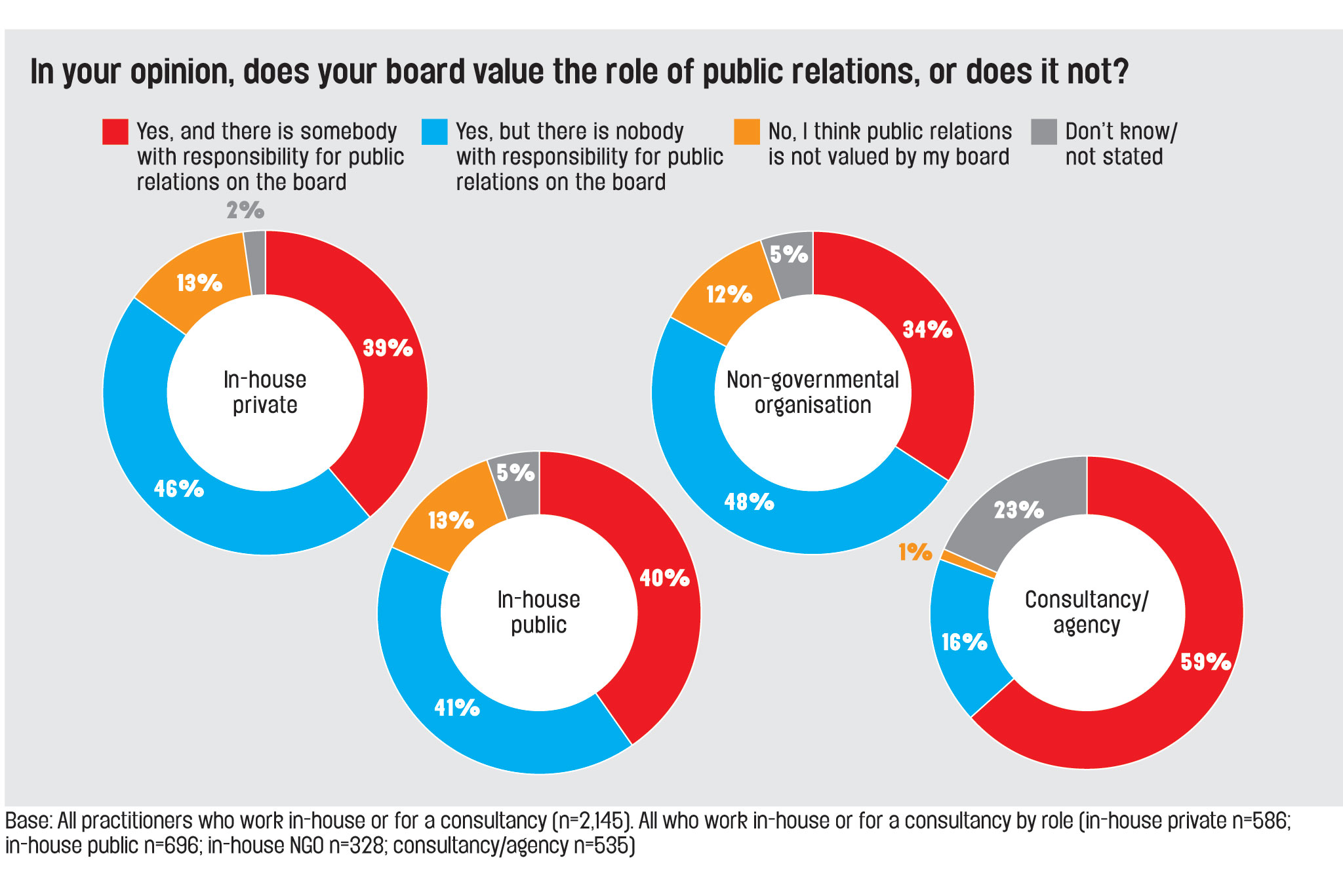 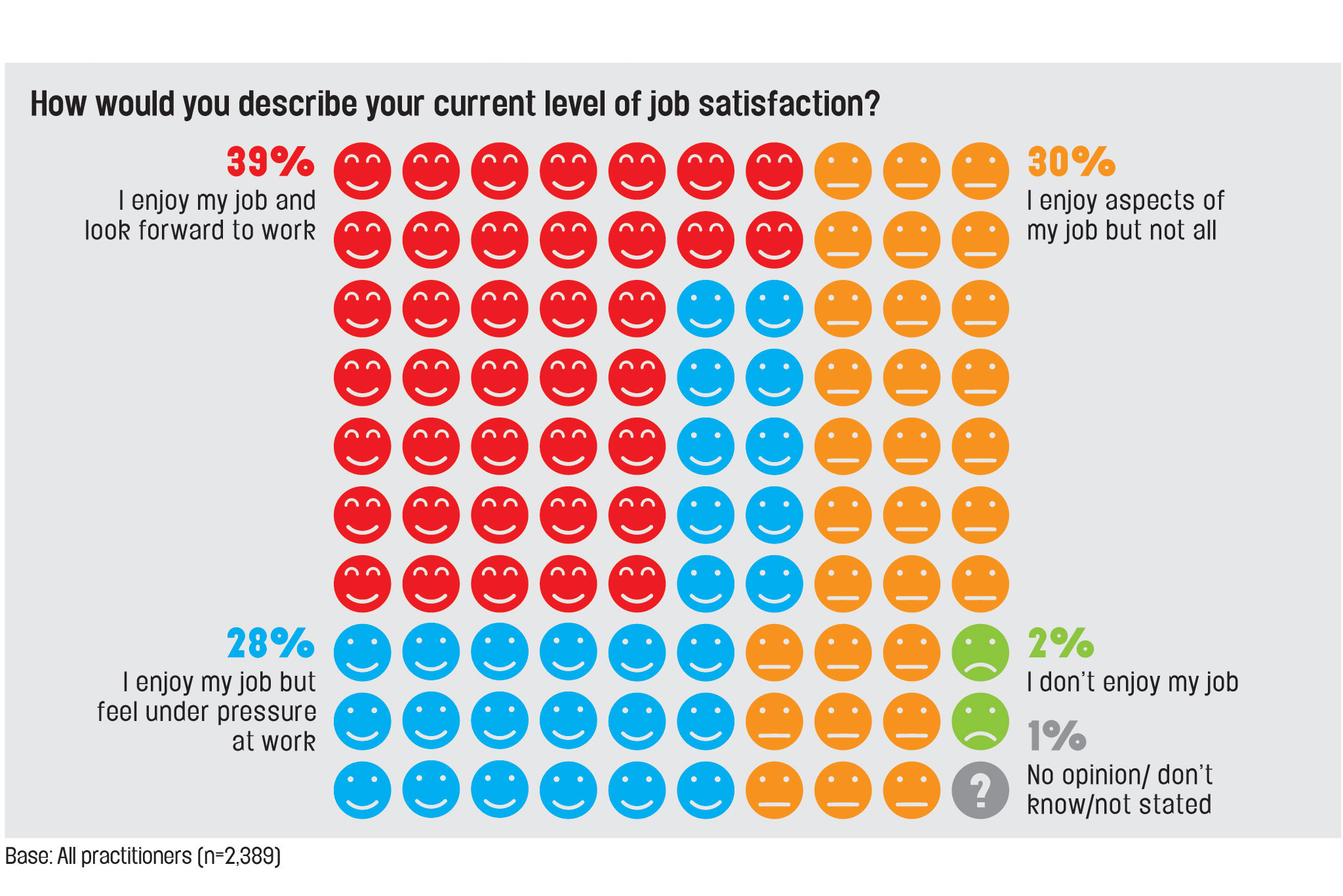 For a breakdown of industry pay differentials between men and women in PR, click here.

The 2014 CIPR State of the Profession report methodology:

ComRes interviewed 2,531 PR professionals online between 25 October and 6 December 2013. ComRes is a member of the British Polling Council and abides by its rules. The survey was conducted according to the Code of Conduct of the Market Research Society.