Sean Trainor, managing director of Uber Engagement, has left abruptly after nearly a decade with the CIPR following a disagreement over reforming its structure.

Trainor was one of ten members of the body's executive board, but told PRWeek he had withdrawn his membership in frustration at what he labelled an 'old business model that doesn't work in the new world'.

He particularly outlined concerns over the structure and size of the CIPR's council, which comprises up to 50 members and acts as the 'governing body' for deciding and voting on issues.

The council votes members to the executive board, which also comprises senior figures such as the CEO and president, and is charged with ensuring the co-ordination of institute business.

Trainor left in reaction to what he claimed was a stifling of suggestions to reform the CIPR's group and council structure. He said the composition of the council, which is a mix of elected members and representatives from the CIPR's 25 regional and sectoral groups, meant it 'was not reacting fast enough'.

PRWeek also spoke to CIPR members who pointed to the quarterly meeting attendance rates - estimated by one to be 60 per cent - and entrenched group interests as hindering responsiveness.

A recent board member and current council member claimed: 'People don't turn up regularly, so people don't get held to account. This means issues aren't followed through and the board runs things.'

Another recent council member pointed to 'discussions getting bogged down', and suggested that the council's numbers should be halved.

Outgoing CIPR CEO Jane Wilson responded that there 'are always things we can do to use resources better' and 'recommendations for improvement are always sought'.

Recent initiatives include the CIPR recently spending £2,500 on participating in a study by the Professional Associations Research Network looking at the make-up of its groups.

However, Wilson defended the size of the council and denied that the board dominated decision-making.

She said: 'Having a member from each group in the council provides a good balance and means it is fully connected to the membership.

'Most council meetings have a regulatory change that they sign off. The size of the council may make a meeting longer, but nine times out of ten it is better for having gone through a consultative process.'

Wilson added regulations state, except in extenuating circumstances, that those who miss two meetings in a row could face losing their place on the council. 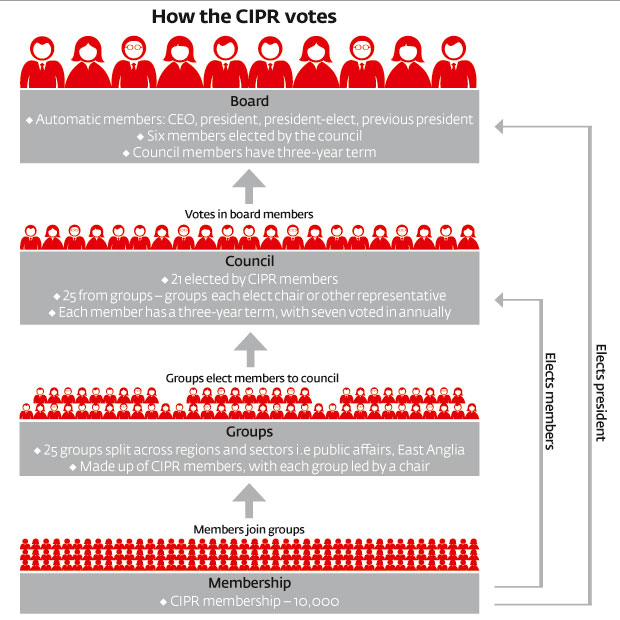 The incoming CIPR CEO Alastair McCapra will have the opportunity to redefine the role, his predecessor Jane Wilson has said.

McCapra, currently CEO of the Landscape Institute, will succeed Wilson on 4 November.

Wilson, who wrote McCapra's job description, said her aim upon joining in 2010 had been to 'address financial drift'. However, she added the role was now about 'looking at the workings of the institute, in terms of how we govern ourselves and use resources'.

Wilson also pointed to the need to 'use technology to make everything work together better'.

In a statement made when he was appointed last week, McCapra said: 'All professions, and the bodies that represent them, are under incredible pressure in the modern world. I will be bringing to the CIPR my experience of how others are rising to these challenges.

'I want to ensure that the PR profession is well-equipped to respond positively to changes in technology, client expectations and regulation.

I also want to ensure that it is highly regarded both by its clients and by society more widely.' McCapra's previous posts include head of policy comms and membership at the Royal Society for Public Health and CEO of the Institute of Conservation.