The complaint concerns Oliver’s reported comment that Labour leader Ed Miliband was potentially ‘giving succour’ to Syrian president Bashar al-Assad’s regime by deciding to force the Government into a second vote on military action against Syria.

A letter addressed to Cabinet Secretary Sir Jeremy Heywood calls for Oliver to apologise and withdraw the remark.

Michael Dugher, the shadow minister without portfolio, writes: ‘It is language which is infantile and irresponsible. It follows a pattern of behaviour by 10 Downing Street through recent days which demeans the office of Prime Minister.’

The party has also released the letter (pictured below) to the media.

A Labour source said: ‘Craig’s mishandling played a big role in Cameron’s defeat. His refusal to be non-partisan on an issue of national security lost Cameron media sympathy, angered us and made the ground fertile for Tory MPs to rebel.’

However, a senior Conservative source said the reaction showed 'we have hit a nerve with them and they overreacted' and claimed there was no need to apologise for the comment.

A Cabinet Office spokeswoman said it had yet to receive the letter. 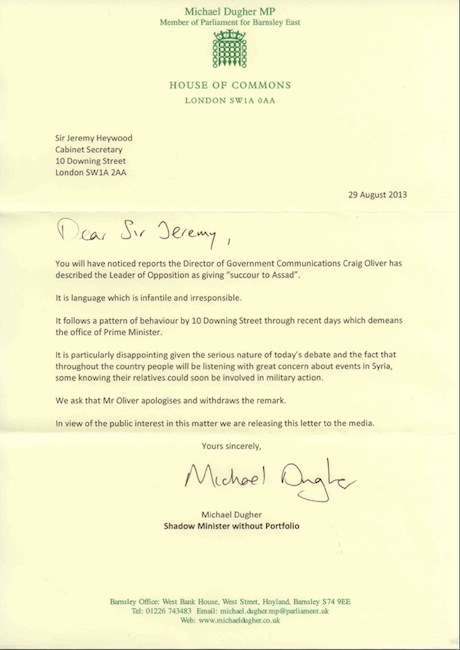