The protesters claim to be from the Reclaim the Power protest camp in Balcombe, where Cuadrilla has been conducting exploratory drilling for oil.

Cuadrilla is not using the controversial technique known as fracking at Balcombe, but has used it at other sites and the anti-fracking campaigners have focused their protest in Balcombe to mobilise opposition to its usage. 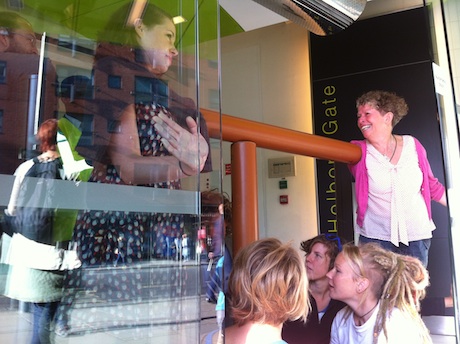 Around six people are understood to be involved in the attempt, with some supergluing themselves to the main door of Bell Pottinger's office in London's Holborn as well as using reinforced arm tubes to bar access.

A spokesman for the protesters said there were eight police officers in attendance and the police had warned them they were acting unlawfully in blocking access to the building.

The protesters said they were ‘blockading’ the building ‘in the hope that for one day at least Bell Pottinger won’t be able to mislead the British public about fracking’.

A Bell Pottinger source rejected the claim it was party to misleading the British public.

The protest appears not to have succeeded in preventing staff from reaching their desks.

Two Bell Pottinger sources and sources at two other PR agencies within the same building, FTI Consulting and Good Relations Group, said staff have been able to access the Holborn office building this morning through another entrance.

A Bell Pottinger spokesman said: ‘We are going about our business as usual.’

Earlier this morning an activist climbed a structure above the main door and unfurled a banner reading ‘BELL POTTINGER – FRACKING LIARS’. The spokesman claimed the banner remains in place as of midday.

In addition the campaigners have been playing an undercover recording of a Bell Pottinger employee saying: ‘I know that everything I say sounds like utter fucking bullshit but...'

A link to a minute-long edit of the recording sent out by the campaigners ends immediately after that phrase, leaving it unclear what the person said next.

A Bell Pottinger insider said the recording was ‘a distortion’ of what the employee said and was not accurate.

The recording was made by a Greenpeace activist following a public meeting in Balcombe.

A representative of the protesters at the scene said that the recording also included the Bell Pottinger employee saying the effect of fracking on bills would be ‘basically insignificant’, though they did not provide a link to this part of the recording.

The source pointed to a report by The Independent on the recording, which names the Bell Pottinger staffer as Mark Linder and quotes him as saying: ‘We've done an analysis and it's a very small... at the most it's a very small percentage... basically insignificant.’

The Independent noted the comment contradicted Cuadrilla's public statements, which hold out the prospect of notable energy bill reductions, without promising them.

An agency spokesman responded that fracking should have a downward pressure on price because it would put more supply into the market and it was hard to make estimates at this stage, but their current estimate was 10 per cent. The spokesman also claimed Greenpeace has not released the full recording of the conversation.