Charities handing out six-figure salaries face a major reputational risk, a PRWeek/OnePoll survey has suggested. The survey was conducted after The Daily Telegraph revealed the number of senior staff being paid six-figure salaries had jumped by 72 per cent since 2010.

Sixty-six per cent of respondents said they would be less willing to donate money to charities that paid staff more than £100,000 a year. This sentiment was felt most keenly in the North East, where 80 per cent said £100,000 or more was too much to pay any voluntary sector staff.

Charities still have some way to go to prove they are better at funnelling money to frontline services, with 46 per cent unsure if they had improved in this respect.

But those perceived as keeping a local focus appear best positioned during times of austerity - 52 per cent said that post-credit crunch they were more likely to donate to organisations with a UK focus.

This sentiment may feed into Cancer Research UK's popularity. Thirty per cent considered it to have the best reputation, an increase of four percentage points on a similar survey conducted two years ago. 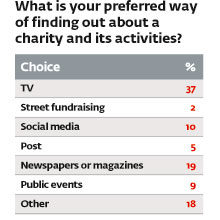 Among 18- to 24-year-olds, 56 per cent said charities needed to be more innovative in raising awareness of their organisation. But though social media are important to this age group, charities must be careful to balance where they place their messages. TV was voted the most important medium by 37 per cent, while only ten per cent favoured social media. 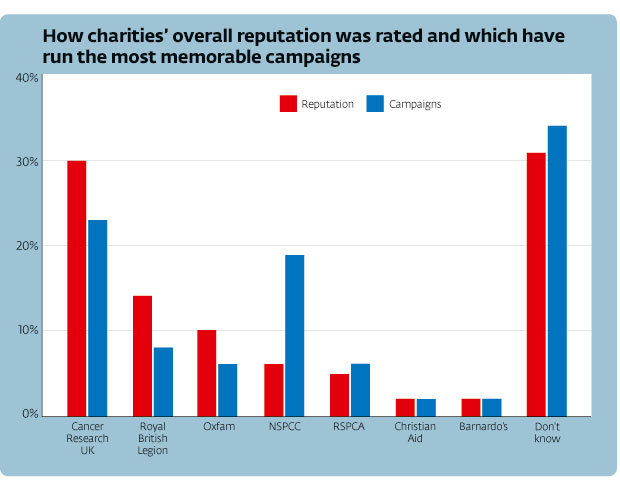 During a period when most Britons have had salary freezes or increases well below inflation, the results of the survey were hardly surprising.

Against a backdrop of high-profile leadership failings in the media, politics, business, the police and the NHS, one would be unlikely to find many backing six-figure salaries for senior figures in any walk of life.

But those in the charity sector must take public sentiment seriously, not least because the survey indicated a strong willingness for people to link their decisions about donating to levels of senior pay.

The sector needs to better explain the complexities and responsibilities of running a major charity. It must also work harder to be seen as acting professionally, whether that means good governance or stringent and transparent evaluation of its own performance and impact.

Digital comms provide charities with a significant and inexpensive way to show what goes on behind the scenes, yet most use digital purely as a fundraising or lobbying tool.