The study, conducted by RealWire CEO Adam Parker, found that those agencies who supplied profit figures for PRWeek's Top 150 PR Consultancies achieved a weighted average profit margin of 17 per cent, an improvement of 0.1 per cent over the 2011 performance for these same agencies.

Profit margins across the sample were wildly divergent – varying from +69.2 per cent to -0.1 per cent, while almost half of those agencies saw their profit margin shrink in 2012.

Below, Parker, compares the PRWeek sample to sample to the PR divisions of listed firms and the wider public marcoms groups. 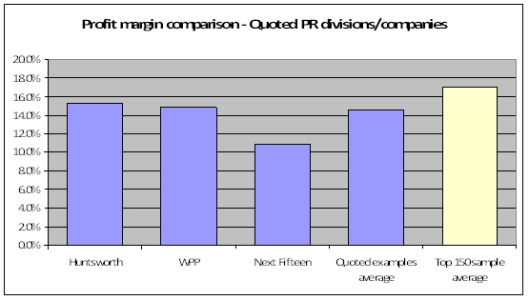 The comparison quoted PR divisions/companies made combined profits of £172.6m on income of £1,181.6m. A weighted average profit margin of 14.6 per cent.All figures from year ended 31/12/12 except Next Fifteen 31/7/2012. Chime’s figures have been excluded this year due to the disposal during 2012 of a substantial proportion of its PR business. 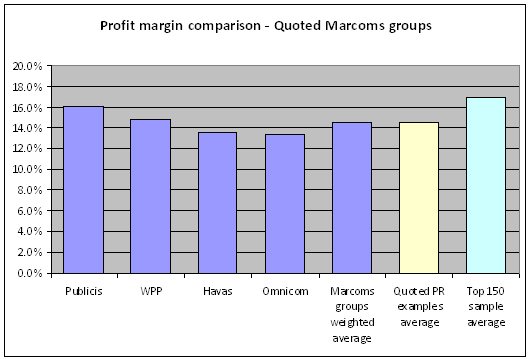 The comparison quoted Marcoms groups made combined profits of approximately £3.79bn on income of approximately £26.15bn. A weighted average profit margin of 14.5 per cent. All figures relate to year ended 31/12/12. Aegis was not included this year due to its acquisition during 2012 by Dentsu.

Once again the headline numbers mask a more complex underlying story. The Top 150 analysis suggest margins were maintained at the same time as achieving significant revenue growth. However, the seventeen agencies within the sample whose profitability reduced came from two very different groups: those with falling income and those with the highest growth.

The quest for market share has perhaps led to lower productivity for some high growth agencies as a consequence of the rapid increase in staff numbers. Meanwhile, some agencies attempting to preserve their position have apparently chosen to maintain, and in many cases grow, permanent staff numbers despite falling income.

Leaving agencies who managed more modest revenue gains achieving the best performance in terms of margin improvement and, unsurprisingly, their movement in staff numbers most closely mirrored their revenue growth.

All of which suggests a very dynamic market place, and provides a reminder that how an agency manages the recruitment, retention and productivity of its staff, is almost always the most important driver of profitability.