In PRWeek's Power Book 2013, published this week, we asked the industry's top practitioners to select the best PR campaign from 2012. Unsurprisingly, the London 2012 Olympics raced to the top of the leader board, with the Paralympics coming in fourth position. The Queen's Jubilee also made the top five.

However, for this feature, we decided to focus on the two companies whose campaigns captured the attention of the PR elite: Red Bull and Royal Mail.

The Red Bull Stratos space-diving project was a popular choice in second place. 'It was literally out of this world,' quipped M&C Saatchi PR chairman and M&C Saatchi Sport & Entertainment CEO Steve Martin.

The Royal Mail's gold postboxes campaign was also a hit, receiving 21 votes. Threepipe co-founder Eddie May praised it for being 'obvious, simple and devastatingly effective'.

On the following pages, we take a close look at these campaigns and assess the lessons they can offer the PR industry.

In 2005, Red Bull and Austrian skydiver and base jumper Felix Baumgartner began to lay the groundwork for a stratospheric freefall designed to transcend human limits. On 14 October 2012, supported by the Stratos team of medical, scientific and engineering experts, Baumgartner ascended to 128,100 feet in a stratospheric balloon and made a freefall jump that saw him rushing towards Earth at supersonic speed before parachuting to the ground.

He became the first human to break the sound barrier in freefall and established additional world records. These records were ratified in February 2013 by the Federation Aeronautique Internationale. Baumgartner's successful feat holds the potential to provide valuable medical and scientific research data for space travel. From its inception, the mission was envisioned as a test programme for advancement in human flight. 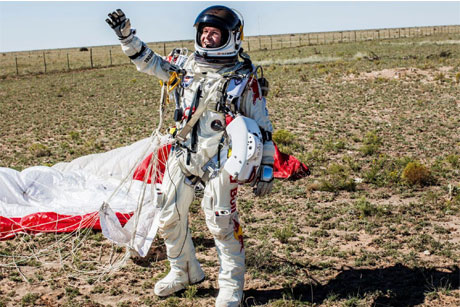 The project started in 2007, when the team was recruited and development of the capsule began. In 2008, the current record-holder for the longest skydive, Colonel Joe Kittinger, joined Stratos. Development and training continued, and in January 2010, the project was unveiled.

In March 2012, Baumgartner completed his first test jump. Camera and comms systems were an essential part of the project. Video footage of the test jump was recorded and released by Red Bull. In the build-up to the mission, numerous behind-the scenes videos and photos were released, alongside interviews and quotes from the team. The second test jump in July was also filmed.

The team suffered a setback when the mission's launch was aborted on 9 October because of adverse weather, but the jump finally took place on 14 October. Live streaming of the mission on YouTube generated more than eight million views and the jump became a global phenomenon. After its completion, Baumgartner began a media tour of the US, which included appearances at the United Nations and on NBC's Today show.

Lessons the PR industry can learn from the campaign

Be brave and aim high

Stratos was a bold and highly ambitious project. Taylor Herring co-founder James Herring says: 'It's rare to see people take on such a level of risk, with a project requiring such long-range planning.'

It is impressive to see a brand invest so much time and money into one stunt. Ogilvy PR MD UK and MD EAME consumer marketing practice Michael Frohlich calls Red Bull's decision to do this 'fantastically brave, if not verging on madness'.

The campaign shows the rewards of aiming higher and taking a chance.

'Red Bull has hopefully inspired marketers to demand more from ourselves,' says We Are Social global MD Robin Grant.

Ambitious campaigns can be created even without huge resources. 'Sure, not all companies have the budget to send a man into space, but everyone has the capacity to set themselves a higher standard and not just settle for a mediocre concept,' he adds.

Stay committed to the idea

Red Bull never wavered from the mission, despite some setbacks. 'Stratos demonstrated commitment on an unprecedented scale,' says Grant. 'It showed determination and dedication to the idea, even when it didn't look like it would happen,' adds Herring.

Red Bull used any issues it encountered along the way to its advantage, sharing its journey with the audience.

'Transparency and honesty are key in modern comms. The reason the Red Bull story was so compelling was because it was so dramatic, and let's face it - there were many times it looked like it wouldn't happen,' says Absolute Radio comms director Cat Macdonald. 'Red Bull had the guts to show it. It was honest and refreshing.'

Deliver something of value

'It wasn't just about a quick stunt or clever creative,' says Grant. 'Red Bull offered something of real value by championing the more "serious" scientific side of Stratos, as well as the extreme sports element. By doing this, Red Bull created a campaign that even captured the imagination of PR cynics.'

Red Bull itself took a back seat. 'It allowed Baumgartner and the crew to take the central position,' says Herring.

The focus throughout the mission was on the scientific and medical data that could be obtained through the jump. This was more than a PR stunt - Red Bull has provided data that could lead to advancements in space travel.

Rework the concept of sponsorship

Red Bull has delivered the modern answer to sponsorship. 'It's always a challenge to crowbar the logo and name of the client on to a sport,' says Herring.

The brand took control of the whole process, becoming not only the sponsor but the creator of the event as well. 'Red Bull created its own sport, with its own athlete, on its own playing field and broadcast it on its own channel,' he adds.

'It's the best piece of branded content we have ever seen,' says Macdonald.

The stunt was also a perfect fit for the brand, aligned to its core messaging. 'What better way to demonstrate that a product gives you wings than to actually jump from space,' adds Macdonald.

Red Bull's decision to broadcast the jump through a live stream on YouTube was innovative.

'It was the first time we saw a groundbreaking and creative use of YouTube in PR. People usually believe TV is the place where big moments happen,' says Herring.

The PR industry should think more laterally about the right media to use in campaigns. 'It was a real game-changing moment,' he adds. 'YouTube is an underused medium and there will be more of this to come.'

Red Bull recognised that YouTube was the ideal channel through which to target its core audience. 'Young people spend a lot of time on YouTube. The site is where they go to find exciting content,' concludes Herring.

On 27 July 2012, Royal Mail announced that it would paint one of its red postboxes gold in the home town of each Team GB Olympic and Paralympic gold medallist. The idea was initially developed by the firm's PR agency Eulogy to help promote its Gold Medal Stamps campaign. This was the first time that Royal Mail had painted its postboxes a different colour to mark a historic event.

The postboxes tapped into the pride felt by local communities towards their athletes. They became tourist attractions, with people queuing to have their photos taken beside them. This helped drive the brand's story online, as people uploaded their photos to the website, goldpostboxes.com. 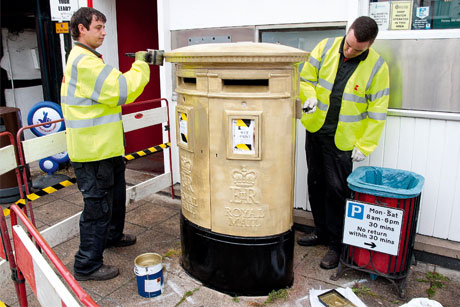 Royal Mail was a licensee of the Games rather than a sponsor. But its campaign became recognised as part of London 2012, to the extent that the brand was the only non-sponsor invited to join the victory parade in September.

The brand received a higher volume of mentions on Twitter than some global sponsors over nine days of the Olympics.

In November, Royal Mail announced that the boxes would remain gold permanently.

Lessons the PR industry can learn from the campaign

Royal Mail's decision to paint the postboxes gold was a simple, but effective idea.

'The campaign was beautiful in its simplicity,' says Telefonica O2 director of comms and reputation Nicola Green. 'Sometimes the simplest ideas, well executed, are the best ones.'

You do not need a huge budget to achieve big results

PR professionals should remember that campaigns do not need to be high-cost to be effective. As Travelodge comms director Shakila Ahmed says, the Royal Mail campaign was 'a creative, quick-win, low-cost idea that achieved blanket coverage worldwide'.

Make use of the iconic

'The campaign worked well because Royal Mail used iconic, everyday objects that were impossible to replicate,' says Cubitt Consulting chairman Simon Brocklebank-Fowler. 'The red boxes are an iconic emblem of Britishness and painting them gold was a striking thing to do,' agrees Biggs.

Royal Mail's idea worked well because it was visually arresting. 'It was an eye-catching and creative idea that really caught people's imagination and brought the Games to life around the country,' says Biggs. 'It generated images that were catnip for press photo desks,' agrees Brocklebank-Fowler.