The Labour Party and its leader Ed Miliband's reputation benefited the most from their performance during party conference season, according to the latest PRWeek/OnePoll survey.

Although the majority of respondents said their opinions of the three major parties had not changed as a result of the conferences, 17 per cent said their opinion of Miliband had improved. This was much higher than those who had a more positive view of David Cameron (nine per cent) and Nick Clegg (7.5 per cent).

Miliband was the only leader to impress more people than he put off, with Clegg faring the worst of the three leaders, negatively affecting the opinions of 19 per cent.

Labour was the only party to see a net boost in opinion - 16 per cent thought better of it compared with 12 per cent who had a more negative view. Labour was also perceived as being the most united party, with 27 per cent. Only seven per cent felt the same about the Liberal Democrats.

Forty-eight per cent of respondents said they were interested in what went on at the party conferences, and 45 per cent rejected the idea of scrapping them - 16 percentage points more than those who wanted to scrap them.

Despite half of people saying conferences were not an effective way to communicate with the public, some messages did get through. When asked to match the conference phrase to the party, the majority of those who picked a party (i.e. aside from those who did not know) were correct.

It's clear from the poll that Ed Miliband finished the conference season ahead by a nose, with David Cameron just behind.

Despite the popular belief that political conferences are on the decline, it is refreshing that almost half the country was interested in what actually happened at them.

But when it came to the electorate identifying which phrases resonated, the largest single category across the survey was 'don't know'. This speaks volumes about the wider impact of the three leaders' main messages: 'I'm sorry', 'one nation' and 'aspiration nation'.

Conference remains vital for the leaders to define themselves. But they speak less and less to the nation over the heads of delegates and more over the shoulders of the commentariat.

And is it any wonder voters think the conferences are inward-looking and not open enough when they are held in anonymous conference centres behind security cordons?

HOW DID THE RECENT CONFERENCES CHANGE YOUR OPINION OF THE PARTY LEADERS? 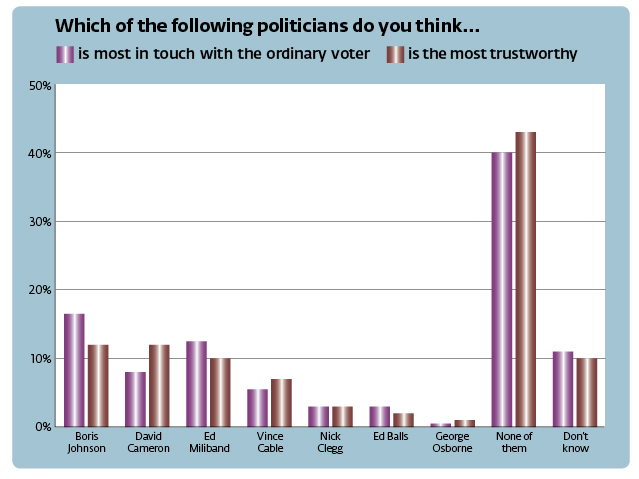