Adopting a child is not a decision to be taken lightly and so there are all sorts of time-consuming checks and balances in place for those who want to do so. But over the past few years children's charity Barnardo's warned that this was counter-productive and prospective parents were being put off by an overly bureaucratic and long-winded selection process.

The Government listened: in March Prime Minister David Cameron announced that adoption was to be speeded up by making changes to the way adoptive parents are screened and the process by which children are matched with them.

The Government plans to halve the time spent assessing, training and approving potential adopters to six months. If there wasn't exactly cheering in Barnardo's Barkingside HQ at this announcement, then there was the satisfying sense of a job well done.

In his speech, Cameron noted a marked disparity between the time it takes for black and minority ethnic (BME) children to be adopted compared with white children. But this was not news to Barnardo's UK director of policy, research and media Puja Darbari. 'We picked this up in our Fostering and Adoption Week in 2009,' she says. 'It takes three times longer for BME children (to be adopted).'

Under the 1989 Children's Act, ethnicity and religion should be taken into account but should not delay the process - a point Cameron made at his roundtable meeting on the issue, which Darbari attended. Inter-racial adoption was raised by Barnardo's chief executive Anne Marie Carrie with the last Labour administration and the Conservatives (in opposition at the time). 'We specifically asked for guidance to be more explicit so the interests and the needs of the child were considered paramount,' explains Darbari.

Primary legislation will now emphasise that the overriding principle in finding a match for a child must remain what is in the child's best interests throughout his or her life. 'We would hope that this would stop delays occurring while people search for a "perfect match" in terms of religion or ethnicity,' says Darbari. 'You need to meet the needs of the child.'

Encouraging people to come forward to adopt children - including older and BME children - is also a part of the package. Barnardo's pushed the message that halving the time taken to approve adopters will help halt the decline in the number of adoptions and reduce the time that vulnerable children are kept waiting for placement in a secure and loving family.

The time factor is important: research shows that a child's chances of being adopted decrease by 20 per cent for every year that passes. And the number of children adopted from care fell to just 3,050 last year - the lowest since 2001.

Barnardo's emphasised the importance of timescale in its public affairs work. In one speech Jonathan Ewen, the charity's lead director for children in care, made the arresting observation: 'We must remember that 12 months is half a lifetime for a toddler.'

What is particularly impressive is that Barnardo's - despite its pedigree as a provider of children's services - was not on the working group that came up with the Government's action plan on adoption. Instead the group comprised local authorities, other voluntary adoption agencies and adoptive parents.

Barnardo's absence seems strange but Darbari is sanguine. 'Local authorities are the main adoption agencies and if you're looking at where things need to be improved then quite a lot would be at local authority level,' she says. 'We worked through the Consortium of Voluntary Adoption Agencies, so were represented on that group.'

The charity had other ways of exerting influence: Barnardo's former chief executive Martin Narey is the Government's ministerial adviser on adoption. While independent, he is sympathetic to the charity's aims. 'Having our former chief executive as adoption czar was advantageous,' says Darbari. 'Quite a lot of his thinking was moulded here.'

Barnardo's also has other experts in high places. The Munro Review of Child Protection has been a significant force in shaping government policy towards children - including on care and adoption - and Carrie sits on the review's implementation working group, which is chaired by parliamentary under secretary of state for children and families Tim Loughton.

Adoption was one of the issues Carrie discussed in the first meeting she had with Michael Gove after he became Secretary of State, and she is Barnardo's lead contact with Gove and government and shadow ministers - with support from Darbari and her team.

It also helps if you are a well-known and respected organisation. The cottages around the green in the century-old purpose-built Barnardo's 'village' at Barkingside is a rural space in the middle of suburban east London and a throwback to the charity's early years. In 1867 Thomas Barnardo set up his Ragged School after he found London children sleeping in the streets and begging for food. 'We've been placing children with families for 100 years,' says Darbari. 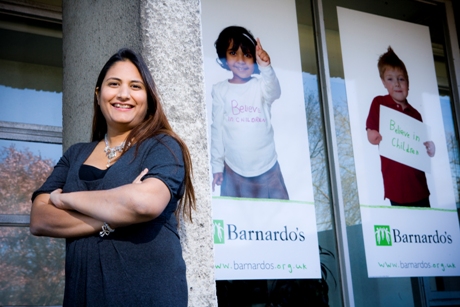 But history does not count for much without a coherent lobbying strategy. 'In public affairs and comms we want to show there's a level of support behind what we're saying,' explains Darbari. 'The easiest way is to do our own research, get a report out and do the media work. We use our own evidence base: we work with 190,000 children and have a significant number of practitioners. We have credibility and authority on these issues.'

'Solution-focused' and 'pragmatic' are words Darbari uses more than once when describing Barnardo's public affairs efforts. She is quick to praise other organisations working to improve the adoption process and says the Government's commitment was also crucial.

In some quarters Cameron's announcement was seen as politically opportune by a Conservative-led coalition keen to show its caring side. But Darbari just shrugs.

'I know the Conservatives had been reviewing the process anyway,' she says. 'It had started looking at particular barriers. But for us, the timing works. And in public affairs, timing does have quite a critical part to play.'

How Barnardo's worked to speed up the adoption process

The Children and Families Bill, included in the Queen's Speech, will prioritise finding homes for BME children and speed up the legal process that precedes children being taken into care.

Barnardo's attends a roundtable held by the Prime Minister in which he commits to introducing primary legislation to ensure ethnic matching is not an overriding consideration in the adoption process. Legislation will also make it easier for children to be placed with foster carers who are also approved adopters, and will speed up the general process for people to become adoptive parents.

The Government announces that the time taken over care proceedings will be cut to six months.

Barnardo's chief executive highlights the need for increased adoptions after figures show that rates are falling. Barnardo's says red tape must be cut, the process speeded up and more support given to adoptive parents.

In a parliamentary question, Barnardo's highlights the time taken by the courts to reach decisions on care or supervision orders - on average, vulnerable children wait more than a year (57 weeks).

Barnardo's Fostering and Adoption Week reveals that the search for a 'perfect' ethnic match is causing delays in mixed-race children being adopted.

We are keen with our current research programme to move beyond the issue of adoption, because we would like the Government to take a whole system approach to overhaul children in care services. We are currently looking to research the needs of older children, because these are often ignored. Nearly 12,000 (43 per cent) of all children who entered care in England last year were aged ten and over, and of those, 80 per cent entered care for the first time.

We are talking to officials about the need for post-adoption support for as long as adoptive parents need it, which is critical to ensure stable placements. We are also working in partnership with Coram on Department for Education-funded research on permanency planning. Together, we are collating data on local authorities' tracking systems and processes that follow children through the system from removal to adoption. The project will help advise local authorities on how to speed up decision-making and will identify points of delay.

The Government has announced that care proceedings will be cut to six months or less in 2013. We want to ensure this date does not slip - delays have a detrimental impact on vulnerable children, with some in limbo for more than a year.

"With evidence in hand, and real life examples to illustrate the case, Barnardo's worked closely with its stakeholders - from local authorities to adoptive parents - to focus on what solutions to the problems might look like. Going to ministers with a list of complaints is pointless; they have enough issues to deal with. But demonstrate the impact of those problems, what can be done to solve them and support for your approach, and you not only have a different story but also a basis for engagement. With a groundswell of public support and understanding around the issues, the decision that ministers had to take on adoption became a lot simpler. Rather than putting their necks on the line, the Government found a worked-up 'fairer and faster' solution that captured the public imagination and became one of the success stories of the coalition so far." - Elin Twigge Account director, PLMR.

"Puja Darbari rightly advances the need for organisations to develop a firm evidence base and to build alliances to demonstrate wide support for particular positions in order to achieve change. The corporate world can learn much from the way the charity sector has advanced positions through creative campaigning." - Kevin Bell Executive chairman, Maitland Political.

From PRWeek's public affairs supplement, May 2012