Sources close to both Conservative Boris Johnson and Labour's Ken Livingstone told PRWeek that the former's campaign strategy, led by Lynton Crosby, has purposefully avoided media interviews, while Livingstone's attempt to focus on policy issues has been dogged by a concentration on his tax arrangements.

A source with links to the Johnson campaign revealed the team had a strategy of holding back on contact with the media when there were spikes in negative coverage for the Tories over certain issues. These included the Leveson Inquiry revelations and 'pastygate'.

'Our thinking was if we didn't appear anywhere then we wouldn't be linked to the bad press the Conservatives were getting,' said the campaign source. 'Our comms tactics around these events were to stay quiet, carry on with Boris visiting parts of London but not brief the press.'

Johnson has appeared at a bare minimum of events with Tory ministers, and has held only one joint event with David Cameron.

It is a strategy that has frustrated members of Livingstone's camp, with a Labour source close to Livingstone's campaign team criticising Boris for 'refusing to do one-on-one interviews that would expose him', including a no-show on last Sunday's Politics Show.

Livingstone's team's approach has been to construct the campaign around major policy issues such as cutting Tube fares.

The Livingstone team insider believed his campaign had suffered because the London Evening Standard had been 'negative going on hostile' towards Livingstone - most notably around his tears during his party political broadcast, which was later revealed to feature paid Londoners reading a script.

Duncan Jeffery, Westminster Abbey's head of comms and former chief press officer to Ken Livingstone, said: 'Because this contest has focused on personality, the opinion polls do seem to be reflecting badly on Ken.'

Both insiders recognised Johnson's personality had been a major strength, with Johnson's insider describing it as a 'saving grace'. The Livingstone insider said: 'Can any amount of strategy overcome the Boris factor?'

The campaign was almost entirely negative and failed to capture the public imagination. Ken failed to nail his personal tax issue. Boris was clearly working to a choreographed strategy masterminded by Lynton Crosby.

I have never known a UK campaign that has been so personality driven. The media have had much less effect than normal because of this. The spikes of activity have, remarkably, had little effect. This has shown how our politics is starting to follow the presidential leanings of America.

THE NEWS EVENTS AND THE CANDIDATES' POLL RATINGS 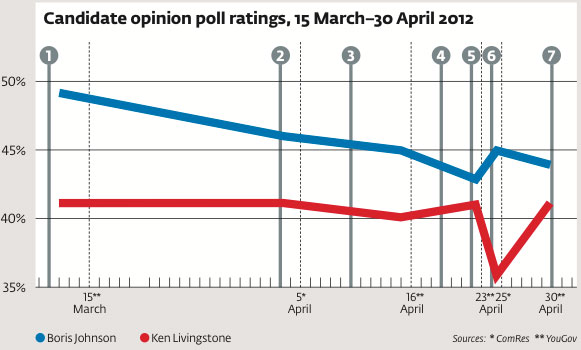 11 March: Ken Livingstone is accused of channelling earnings of £238,000 through a tax-avoidance scheme.

3 April: Following a fiery radio debate, Boris Johnson calls Livingstone a 'fucking liar' over the Labour candidate's accusations his rival had used a private firm to avoid tax on his earnings.

10 April: Livingstone cries as he watches a mayoral campaign video in which Londoners urge him to win.

19 April: Livingstone sparks a row by saying his rival could face corporate manslaughter charges over cyclist deaths in the capital. This follows a campaign led by The Times over cyclist safety.

22 April: The BBC One mayoral debate in which Johnson says he will keep fares down 'in the long term'.

24 April: The ITV mayoral debate, in which Johnson vows to stop moving benefit claimants out of London.